We were up early....it must be the excitement that was bursting inside us (or perhaps the urge to get out of our really small and spartan room?). Well, being just 3 mins walk to the Plaza del Obradoiro / old Town where parking is limited and expensive, can't complain much.

Anyway, we had a great start with a hearty breakfast (a good variety of toast, eggs and bacons) all freshly prepared by our B&B hosts.

As we stroll the streets of this UNESCO heritage town towards the Shrine of St. James, being finally in Santiago de Compostela, one of three Catholic holy cities besides Rome & Jerusalem; and the final destination of the Route of St. James, everything seems so surreal. 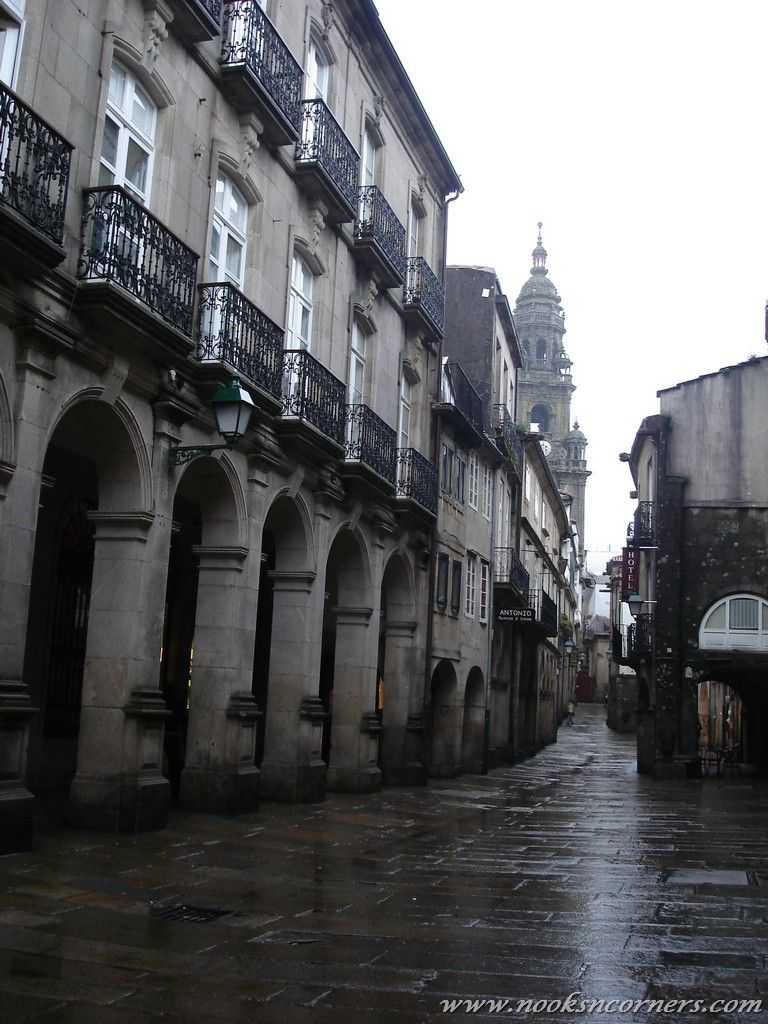 It's a drizzling day peppered with occasional short-lived heavy downpour and very strong winds....by 2pm, the cleaner has collected a huge container of broken umbrellas! What a sight!

After some detour to the numerous souvenirs shops and aroma-filled cafes bustling with the morning crowds, the sky finally cleared and here we were........the majestic cathedral. 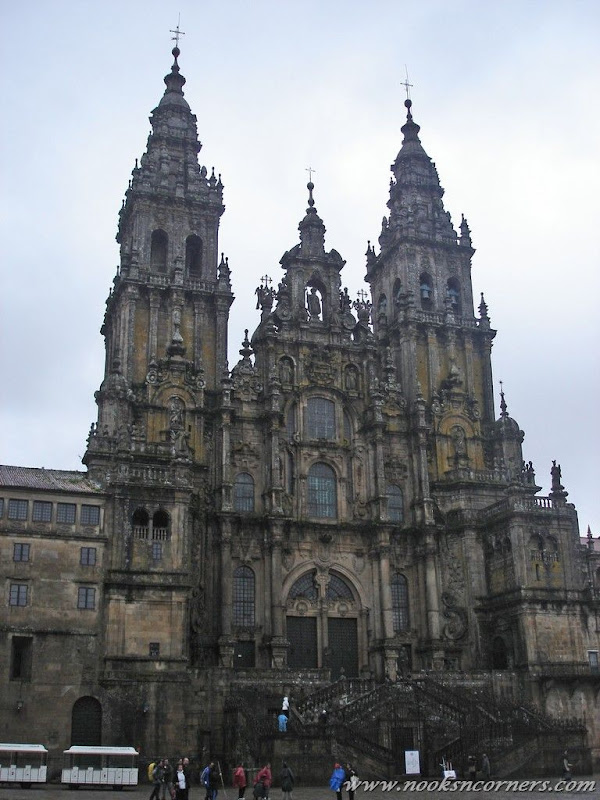 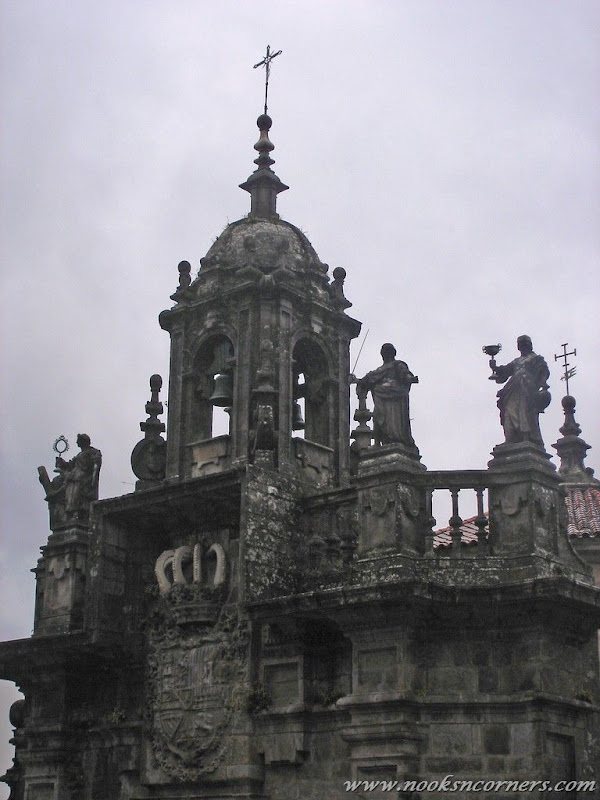 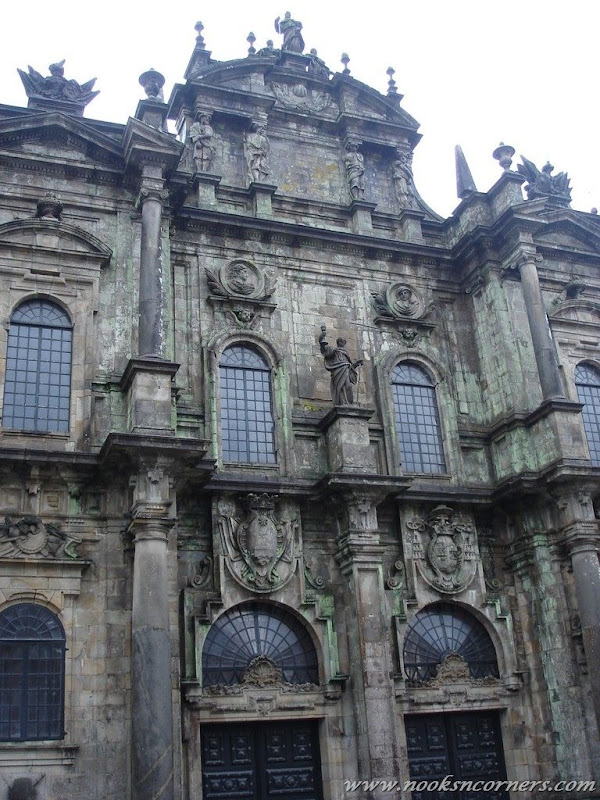 Pilgrim mass is held daily in the cathedral at midday. Having heard how packed the cathedral can be for the mass, we got there 1.5 hrs before the mass begins. Lucky for us that we only queued for 10 mins.

Though the exterior walls of the cathedral was rather lack-lustre despite its majestic architecture, the interior was magnificent.

By the time mass begins, forget about sitting space, even standing space is hard to come by. The cathedral was filled to the brim! Towards the end of the mass, a huge censer called the botafumeiro will be swung down from the cathedral ceiling. It's an amazing sight that draws believer and non-believers to the mass!

According to some, the fumes from the botafumeiro is said to fume off the sweaty smell of the pilgrims who had walked hundreds of miles. Personally, we just loved the smell of the incense....it relaxes our mind, body and soul.

It was the most spiritually-inspired mass we've ever attended. Not that there is any difference in the way the mass was carried out, but rather seeing the many pilgrims who travelled the long distance for their faith is touching and inspiring. After mass, we lingered around for more prayers.

There's a folklore that visitors who place their fingers in the little cavities of the candle-holder at the central arch where the 5 meter high Christ the King is; or knock one's forehead 3 times on the head of the image known as Santo dos Croques at the rear of this impressive marble column looking onto the altar, that person will absorb the genius and wisdom of the figure. Well, we did went to the back of the column but folklore being just myth to us, except praying and taking pictures, we did none of the above. 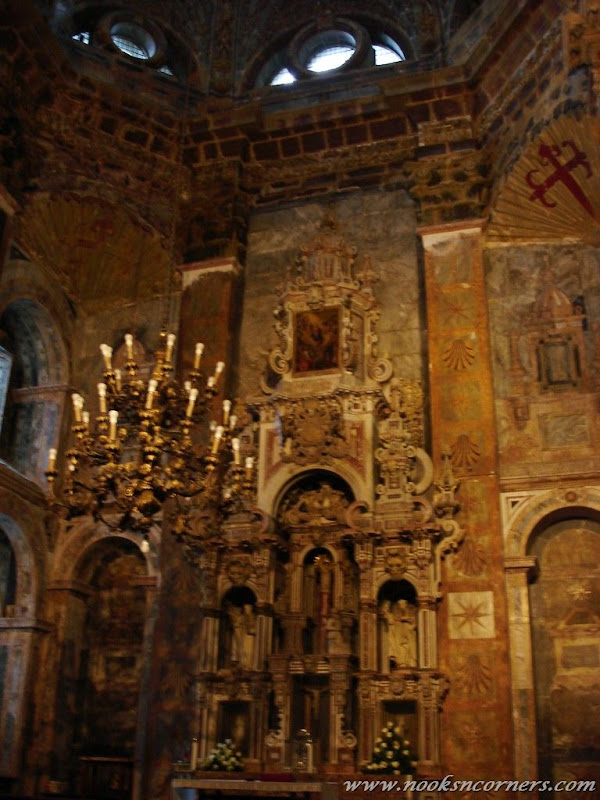 It was our lucky day! We had wanted to go to the roof of the cathedral for a bird's eye view of this old city but it was closed for repairs. We were disappointed initially but the surprise that came after was even better. We were able to visit the tomb of St. James without queuing for hours in the rain,,,,,like these faithful.... 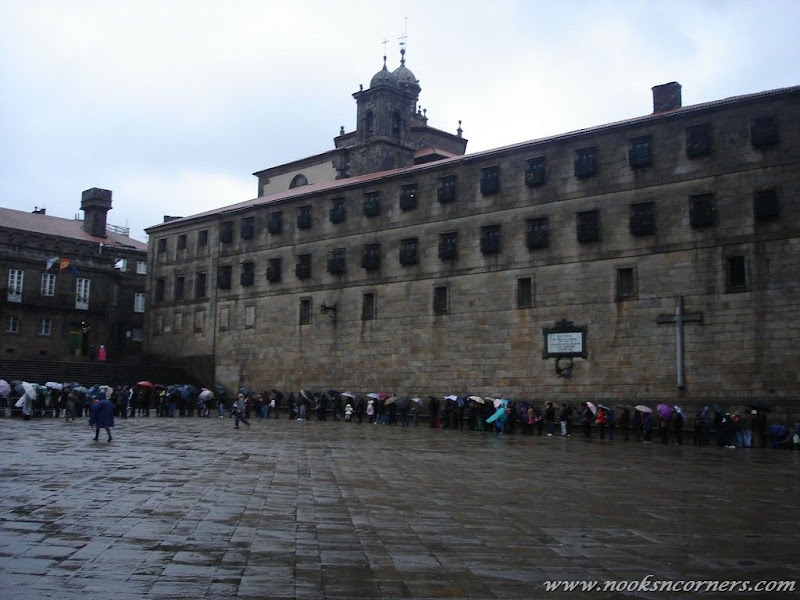 And this was only half of the queue that we took due to camera limitation! St. James being one of the twelve apostles of Jesus, he definitely deserved this queuing.


The rest of the afternoon was spent savouring the beauty of the historical monuments and buildings of this old town that was built since the Middle Ages; browsing shops and looking for souvenirs (was really tempted to buy a smaller botafumeiro....but that means our luggage will be grossly overweight! So, had to settle for a miniature); queuing for our pilgrim certificate only to realise that we had not got our pilgrimage passbook stamped at the designated stops along the entire route.....was really upsetting,

Our sadness quickly disappeared after chatting with some pilgrims who just arrived (and officially ended their pilgrimage) the town. Their positive attitudes and overwhelming joy just overflowed to us.

Near the bridge that supposedly ends the pilgrimage is a 5-star hotel. There, we discovered an old tradition....where pilgrims were given free food and lodging by this hotel. 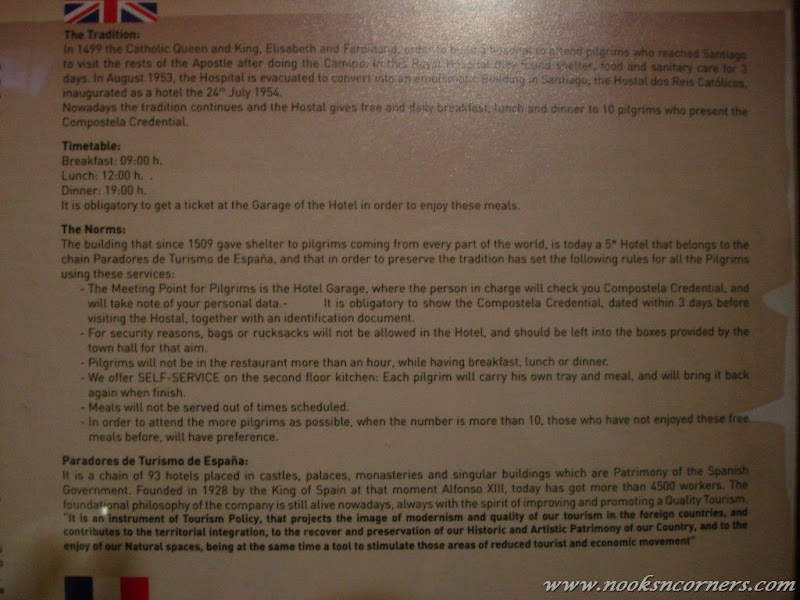 Having just an extremely light lunch, we were already starving by 7pm. We celebrated the end of our so-called pilgrimage with a delicious Spanish dish....potato egg omelette. Can't recall what the other dish was, some kind of lasagne,,,,anyway, it was equally delicious and local. 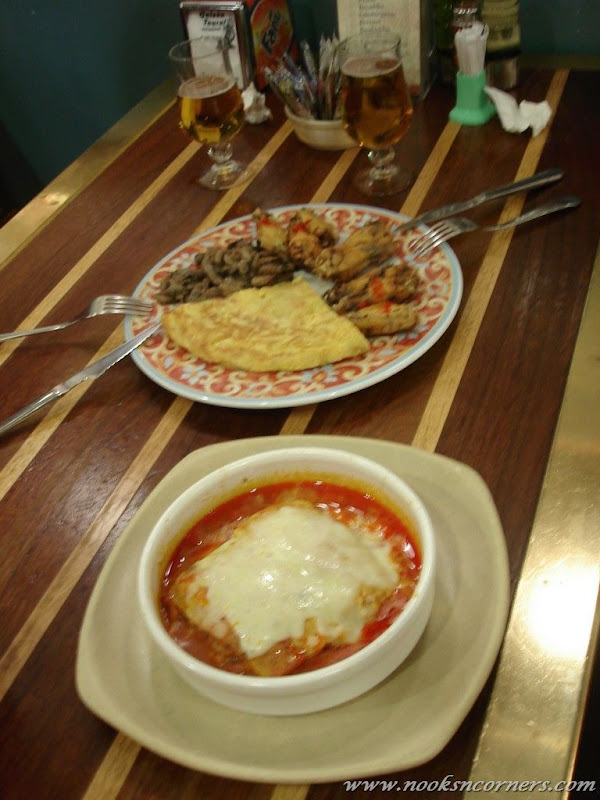 Since by Spanish standard, having dinner at 7pm is early, then returning to the B&B at 8pm is considered unthinkable!

With all shops closed except for cafes and restaurants, and being our last night here, we decided to catch our last glimpse of the cathedral. 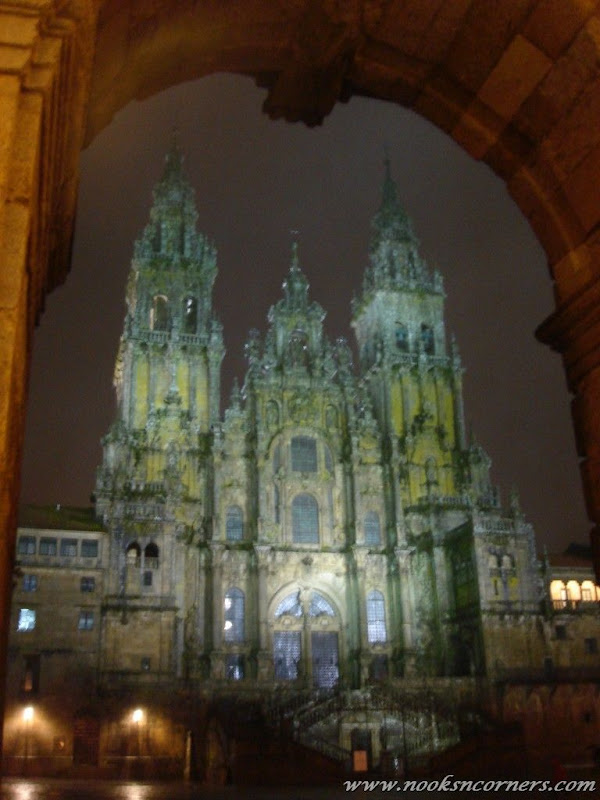 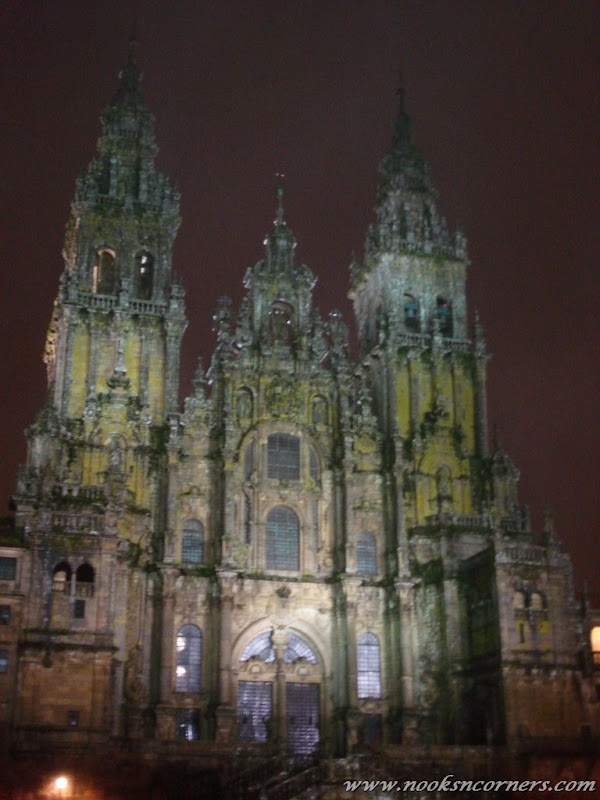 With the crowds gone and the extremely dark night due to the incessant rain throughout the day, the cathedral on this wet night is evermore so mystifying and captivating.

We would had lingered a little while longer had it not been the drizzle that threatened to turn heavy. By the time we reach our B&B, our jeans were totally soaked through and we were shivering mad from the cold! Yet, it was totally worth it!