We woke up with mixed feelings, sad (and very unwilling) to leave Montserrat yet at the same time excited over the unknown journey ahead.....wondering what's in-store for us at every turns and corners.

It will be a somewhat dry journey today since we will be driving most of the time.....it was kind of a "bridge-over" day which was imminent due to the long distance between our current location and the next destination, Picos de Europa.

Of course, we didn't travel all the way to Spain just to drive! So, we studied the different routes during our preparation stage and twisted and turned our final route to minimize the dryness of the day, even if it means having to travel longer distances just so that we could visit an interesting place.

From Montserrat, our first pit stop for the day was Zaragoza, the regional capital of the old kingdom of Aragon.

As we were expecting a small, somewhat laid-back city (which usually was the case for cities outside the capital....based on the countries that we had traveled), we were taken aback as we approached Zaragoza. It is a large and modern city! In fact, looking at it from outside the surrounding walls, it is an alluring city that we would very much wanted to spend a day or two there.

USDA Encourages Ag Producers, Residen…
Travels through History – France – Na…
Top places to visit in the United Sta…
Travels through History – Northern Sp…
Barcelona plan to offer €9 million in…
We did not Photoshop the lighting of the picture so as to show the thick layers of cloud hovering intimidatingly above us.....and these cloud brought about an impending storm that eventually turned into a mini tsunami which was reported on the daily news back home.....much to our ignorance until we were back 2 over weeks later. According to the Spanish officials, the tsunami was an abnormality and it wrecked much havoc across the northern coastal cities.

Anyway, ignorance may be a blessing at times! The old city of Zaragoza is attractive, 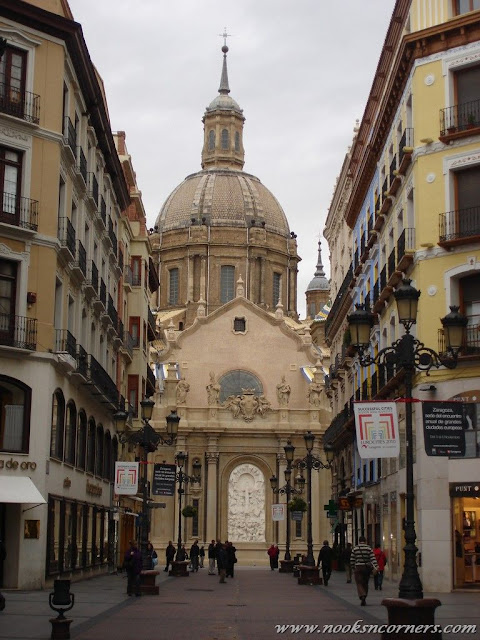 and the highlight has to be the Basilica del Pilar or The Basilica of Our Lady of the Pilar. 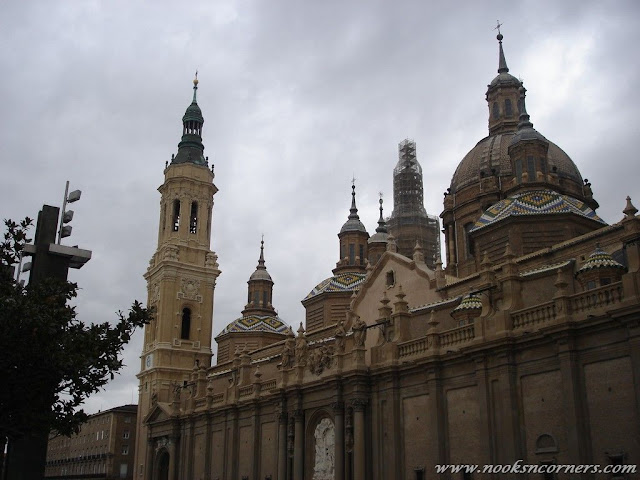 The interior of the basilica definitely lives up to its reputation.....it is serene yet majestic! As it was already noon when we reached Zaragoza, we only had around 15-20 minutes to savour the beauty of the basilica before they closes for lunch.

Unfortunately, we were not able to share any photos of the interiors as no photography is allowed and they MEAN it....with security personnel keeping an eagle eye on all visitors and always ready to swoop down on any offenders!


The design of the basilica is structured around the Sacred Column of the Virgin, which the Chapter of the Pillar was never allowed to be moved from its original site. What IS this column? Puzzled? Here's a summary of the story behind this Pilar:

"According to old tradition, the Virgin Mary whilst still living in Jerusalem, went to Zaragoza to console and encourage James the Apostle. There were 3 peculiar features that characterise this tradition:

1. It is a coming and not an apparition of the Virgin

2. The Pilar was brought by our Lady to Zaragoza so that the first chapel should be built on it

3. A link between the Pilar tradition and the Jacobean tradition. That is why Zaragoza and Compostela, the Pilar and James, have constituted 2 essential axes around which the spirituality of the Spanish country has rotated for centuries."

The basilica is a place of pilgrimage for Spanish faithful and the thousands of people that visited it everyday has transformed the basilica into the symbol which identifies Zaragoza throughout the world.

Outside the basilica is the Plaza del Pilar, an open space where a thousand pigeons gather.


The far end of the plaza has sculptures that seems to symbolise the world....(seriously not sure what they are....but looked unique and iconic to the old city of Zaragoza).... 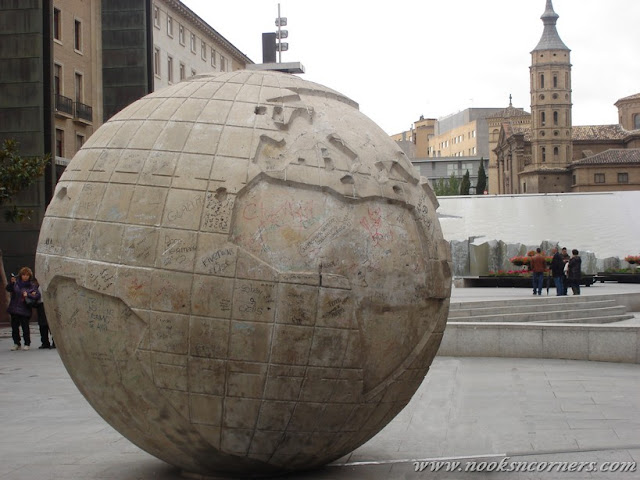 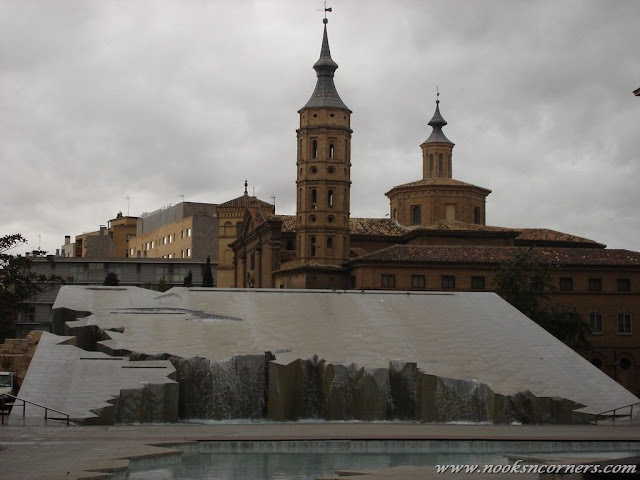 With a long distant ahead of us to cover, we decided to save our time spending on lunch to stroll the old city. It is a city that is definitely worth staying over. We settled for some quick snack as lunch and that turned out fantastic. We had hot, crispy churros and piping hot chocolate to go with it. It was heavenly. We literally had to fight with each other over the remaining piece.

It was at the cafe while waiting for our churros to be cooked that we chat with the counter lady and came to know that there was going to be a very bad storm. But, given her low proficiency in conversing in English, all we knew was "oh, you going San Sebastian? No good, no good. Bad storm, very very bad storm....no good no good." It was so kind and lovely of her. Nevertheless, we didn't put much thoughts into it since we knew it was the raining season, and just brush it aside.

Leaving Zaragoza, we had a long drive to our final pit stop for the day, a place called Noain, which is a small city just outside of Pamplona. 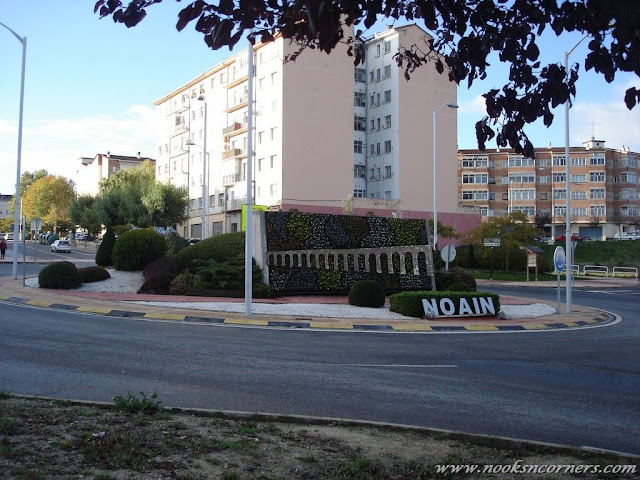 See....it is basically a residential estate with a value-for-money hotel that serves as a stop-over for travelers. It was a good decision indeed that we did not choose to stay in Pamplona eventually. We only managed to reach Noain around 7pm and it really makes no sense to pay so much for a motel in Pamplona when we can get a 3* hotel here at a lower rate. And, who has the energy to explore a huge city after a tiring day!

Though there isn't much to explore, Noain left us with unforgettable memories. First, one of the counter lady at our hotel, Husa Noain Pamplona was extremely helpful despite the constant check-in of guests. Understanding that we do not have proper maps for our journey ahead, she actually made use of the time in-between serving guests and help us search the internet and printed the relevant maps from Google. We were very grateful for her tremendous help.

Then, since it was still early, we went out to check out the streets for food and found a busy supermarket.....yoohoo.....our favourite hangout! It was really fun to shop in supermarkets just like the locals! We were shopping for salad for dinner and a row of snacks selling at discounts caught our eyes. Not sure what they were and exactly how much they were, we checked with a few shop assistants but none could understand English. At that moment, a friendly couple shopping with their strong and adorable baby overhead our conversation and came to our assistance. It was really a wonderful experience. Not only did they introduce us to the different types of Spanish sweets and the popular brands, they also introduce us to the typical salad sauce to go with our salad. It really brightens up our trip.

We got our salads, local sweets and some fresh fig....it was the first time that we have seen fresh figs. If you have not got a chance, here it is....