Thinking of where to go in 2021? Hiking the Jeju Olle Trail is one of the best ways to experience the rural beauty and nature of South Korea.
Autumn is in full swing on the beautiful island of Jeju, South Korea as dried orange leaves are set against the backdrop of the turquoise sea. I have left the explosive capital city of Seoul to arrive in the calm and tranquility of Jeju Island.

Bikepacking - A Brief Introduction an…
GetResponse Review-How to Setup
Seal Shore campsite
A Furry’s Guide to Digital Signature …
Do you know which Countries Have esca…
It’s hard to believe I am in South Korea, after all, where are the neon lights and skyscrapers?
Jeju Island is a rare patch of South Korea bursting with nature, culture and heritage – its craggy coastline is lined with emerald bays and lapping beaches, while further inland are studded with ensconced waterfalls and green prairies. Having long gained a loyal following among South Koreans, Jeju is surprisingly empty of foreign tourists. 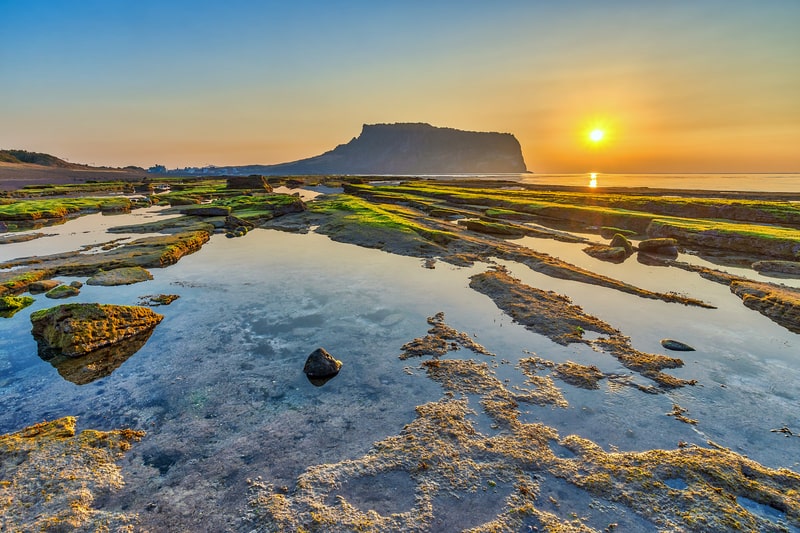 The Jeju Olle Trail, a network of hiking routes that criss cross Jeju island. Jeju has long been a popular destination for the South Koreans, but it has surprisingly stayed off the international tourist radar.

The Jeju Olle Trail leads hikers along the pristine coastlines of Jeju, up into the oreum (a type of dormant, lateral volcano), past stone walls piled up with black basalt, and across green fields with wild flowers in full bloom.

Considered one of the best walking trails in the world, the Jeju Olle Trail gives peace, happiness and healing to those walking the trail. Since its first opening in September 2007, 21 courses and over 339km (210 miles) of routes have been made available to travelers.

What is the Jeju Olle Trail?

“Olle” comes from the old Jeju dialect, which refers to a very narrow alley or path from a street to a gate of a house. “Jeju Olle” meaning trail paths in Jeju, serve as trekking routes to connect Jeju to the world and beyond.

Olle also holds another deeper meaning: as it sounds very similar to “would you come?” in the Korean language. “Jeju Olle” therefore also means, “Would you come to Jeju?”.

Everyone is Welcome on the Jeju Olle Trail

On average, each Jeju Olle Trail is 10-18 kilometers (6-11 miles) in length. The trails allow hikers the chance to explore Jeju’s coastline that varies rapidly from lowlands to highlands and back to lowlands again. These quick shifts in topography allow you to enjoy farmland and forests, fresh water ponds and ocean vistas, waterfalls and cliffs — all on a single journey.

Almost all the planned walks are estimated to take between 4 and 8 hours to complete. They are generally not too difficult, and almost anyone can complete them (including those without walking experience). There are no overly high altitudes to cover nor rugged stretches that require technical skills. There are absolutely no route fees. 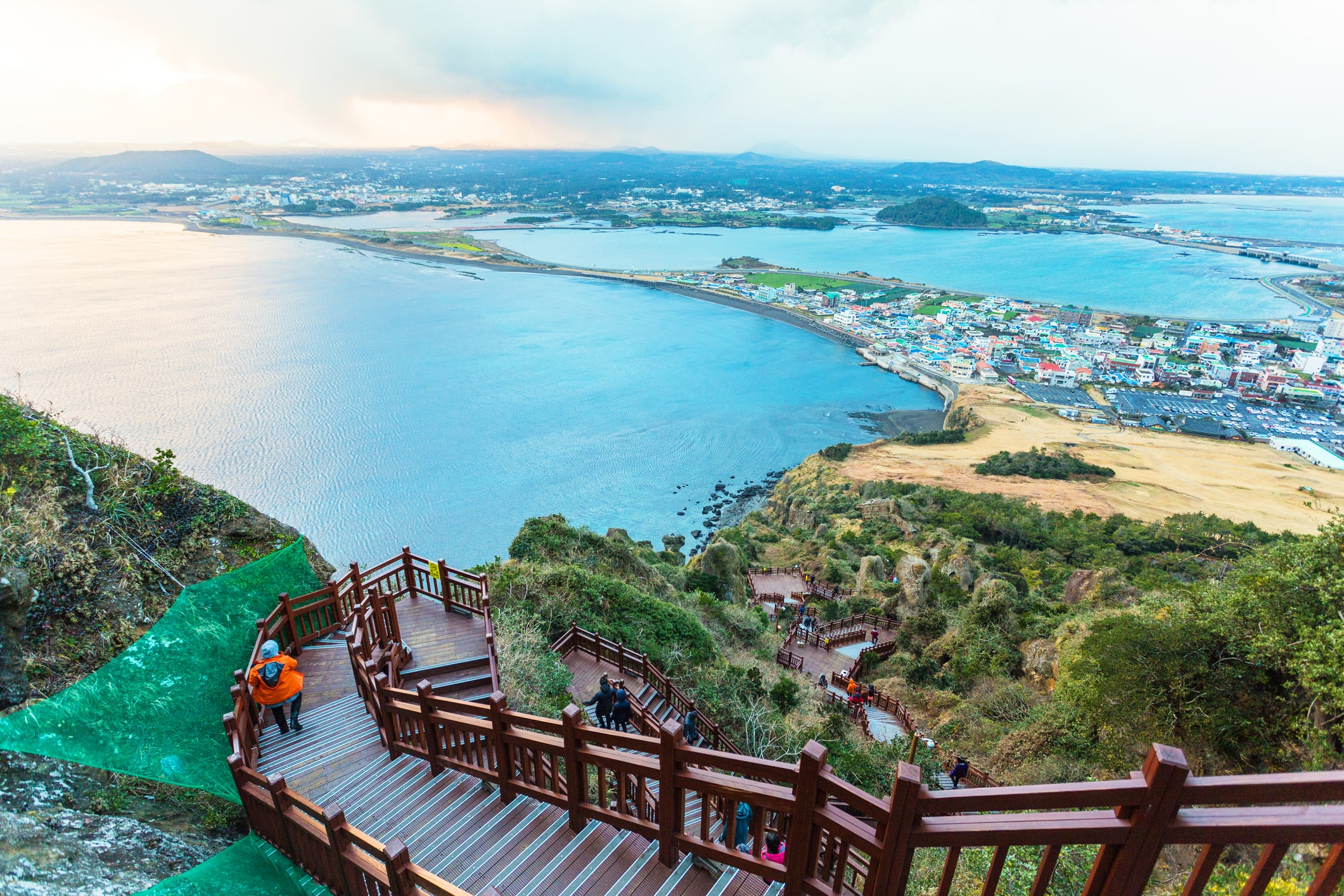 Jeju Island was the first UNESCO World Heritage site in South Korea. The island is an excellent place for active travelers with a love for the outdoors. The natural landscapes are harmonized with beautiful sea, falls, cliffs, caves, and unique oreum.

All over Jeju island, you can find stone statues of the Dol Hareubang (reminiscent of the moai on Easter Island). Carved from the island’s porous volcanic rock, these mysterious guardians stand up to 3m (10 ft) high.

They’re easily recognisable thanks to their shape: the sculptures all have bulging, pupil-less eyes on a grim face, their hands rest atop their bellies, and all the sculptures wear mushroom-shaped hats that are often interpreted as phallic. Their origins are mysterious, but are often attributed to the island’s shamanic traditions.

The People of Jeju Island

On Jeju island, locals live by the “Sam Mu” (“Three Nothings”) – no beggars, no thieves, no gates. So you can imagine how peaceful, safe and laidback life must be on this island.

Jeju is also proud to be home to the Haenyo, also known as the women of the sea. These famous women divers, or Korean mermaids, often dive to depths of up to 20 meters (65 ft) without breathing apparatus, to collect seafood which they sell along the beaches.

There are stories about the diving women including Sulmundaehalmang (a grandmother from one of Jeju’s folk tales) and her descendants. Diving was the first profession for women in Korea and the Haenyo are some of the best free divers in the world.

What I Love about Jeju Island

The natural landscapes of Jeju are one of the most stunning in the whole of South Korea. Fields surrounded by short stone walls and the volcanic oreum are unique to Jeju island. Waterfalls are dotted around the island, and some of the beaches off the island have the clearest water you’ll ever see.

These landscapes look completely different in each season. In spring, fields are filled with bright yellow-colored flowers; while summer sees the beaches shimmering in gold. In autumn, coffee-colored silver grass are in full bloom; and white snow covers the the peak of Mount Halla-san in winter.

Suh Myung-Sook, the founder and president of Jeju Olle Foundation, used to an editor of a weekly newsmagazine.

Leaving her post as a reporter after 20 years of her service, she went on her own pilgrimage along the famous Camino de Santiago from France to Spain. Towards the end of her pilgrimage, she met a woman from England and made a promise together to share their peace and happiness on the road with their home countries.

When she came back to her hometown, Jeju, she was determined to create a trekking route that would show travelers her beautiful backyard. Together with some volunteers, she began to find and restore hidden paths, small routes inaccessible by cars and forgotten tracks. With their combined efforts, they created these new trails for hikers to explore their beautiful island in a meaningful way.

Today, the non-profit Jeju Olle Foundation continues to work hard in carving new routes all around the island. I hope you can join us in experiencing the beauty of Jeju Island through the trails.

How to Get to Jeju Island

The main gateway to Jeju is the Jeju International Airport, located on the northern part of the island. Flights from Seoul usually take just over 1 hour, and cost around US$150 return. From from the southern coastal city of Busan, it’s less than an hour.

Book Your Flights to Jeju

If you’re on a tight budget or have more time on your hands, there are also ferry services to Jeju. Depending on which port you board your ferry and which route it takes, it can take between 2-4 hours to reach Jeju. Check here for more details.

The ferry currently runs from five locations to Jeju:

How to Get Around Jeju Island

In order to rent a car in South Korea, you will need to have a valid International Driving Permit that you must obtain before your trip. If you’re visiting Jeju in summer, it’s best to book your rental car online ahead of time to avoid disappointment.

Note that Koreans drive on the right side of the road. Roads are signposted in both Korean and English, so don’t panic. All rental cars come equipped with a handy voice navigation system and GPS.

Search for Car Rentals on Jeju!

Where to Stay on Jeju Island

Most hotels are concentrated in Jeju City in the north and Seogwipo in the south. But if you are renting a car, I definitely recommend staying in the rural parts of the island to enjoy the nature and greenery.

Centrally located in Seogwipo, the budget hotel is affordable and yet modern, comfortable and stylish. It is a business hotel, and has good connections to public transport. Check the rates.

I stayed at this beautiful 5-star hotel located just a 10-minute walk from the famous Jungmun Beach. It’s got modern features and a whole range of facilities, including both indoor and outdoor pools as well as an over-the-top kids play area. Check the rates here.

Are you planning to visit Jeju Island? Did my article spark your interest in hiking Jeju? Leave me a comment below if you have any questions!