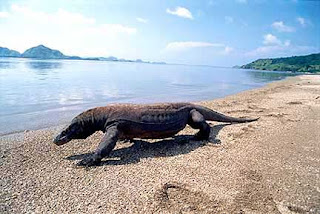 Komodo National Park lies in the Wallacea Region of Indonesia, identified by WWF and Conservation International as a global conservation priority area, and is located in the center of the Indonesian archipelago, between the islands of Sumbawa and Flores. Komodo National Park includes three major islands: Komodo, Rinca and Padar, as well as numerous smaller islands creating a total surface area (marine and land) of more than 1,800 km2. As well as being home to the Komodo Dragon, also known as the Komodo Monitor, or Ora (to Indonesians), the park provides refuge for many other notable terrestrial species. Moreover, the Park includes one of the richest marine environments.

HOW TO REACH KOMODO NATIONAL PARK

The ferry service between the cities of Sape on the eastern tip of Sumbawa and Labuanbajo on Flores drops of passengers on Komodo once or twice every week. There is no port on the island, so passengers are unloaded onto small vessels which ferry's them into the islands only village - note that it's not all departures that has this service, so check beforehand. Bima, a short drive from Sape, has an airstrip with flights to Denpasar.

Travellers coming in from Sape to the west (those travelling overland through Sumbawa and also those arriving at Bima airport) should note that the once-daily ferries from Sape can be suspended indefinitely due to bad weather, so if you want to be sure of your travel arrangements, flying to Labuanbajo is a much safer bet. (If you get stranded at Sape, the best Bima airport will be able to offer is a flight back to Denpasar on Bali.)

WHAT TO SEE IN Komodo NATIONAL PARK

The main reasons to travel to Komodo National Park are the Komodo Dragons, the superb beaches and the unspoilt corals.

Unless really interested in fauna, traveling to Komodo just for lizard-sightseeing may be too time and money consuming.

HOW TO STAY SAFE IN Komodo National PARK

The Komodo Dragon has a history of attacking humans. Beware of getting too close, and if you are visiting via the park's office (which you should), ask for a guide and stick close to him. Do not wander off or do anything without his consent. Komodos may approach the guest rest area during annual feeding time, but in this time, find a building (which are usually elevated) and stay clear from the railings. Komodos can and will jump to obtain food if necessary. Park rangers are usually present at these events and will deflect any Komodos trying to get in (which they can do).

You may be given a large pole with a split on the end, forming a "Y" shape. This can be used as a walking pole or for moving things on your path - however, if wild animals threaten, it can be used as a last form of defense (despite being hardly useful against komodos). Overall, try keeping a watchful eye and steer clear of any wildlife.

Komodos are extremely dangerous if close enough. They can run faster than humans (and accelerate very quickly), so best not approach if necessary. Jumping into water (as Komodos are often found near the beach too) doesn't help either, as they can swim faster than humans, can dive, and can also swim against strong currents (in fact, sometimes Komodos are found on neighboring islands, suspected of swimming there). Although their saliva is falsely believed to be poisonous, it is laden with harmful bacteria and will require medical treatment (which is usually not immediately possible ), and their jaws can mean instant death. It may also charge at its victims. It's tail is equally deadly and may be swung dangerously, knocking victims off their feet.

Younger Komodos may live in trees. While not as dangerous as their parents, they can still jump off suddenly and cause panic. Snakes, monitor lizards, and other animals are also present and may cause minor problems.

Saltwater Crocodiles are not present on Komodo Island but they may be present on the surrounding islands and in the ocean. Any area with estuaries and river mouths should permit extra caution as, although they are technically not present on Komodo, the islands ARE within the species natural range. It was once believed by Indonesian natives that monitor lizards (including the Komodo dragon) were capable of warning humans of a crocodile's presence.