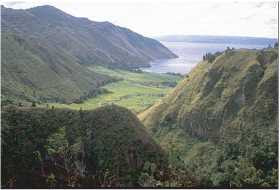 HOW TO REACH BERASTAGI

It is recommended that you know someone with a car in Medan, the closest biggest city in North Sumatra with an airport, because public transport to Brastagi is quite bad, often people squeeze inside a bus and some even sit on top of the roof of the bus. You could get a taxi straight there from the airport (many touts will approach you)with normal price 350000 rp/person. Use your negotiation skill to get the price down to 250000 rp/person. You can also go to Pinang Baris bus station in Medan 10k west of city centre or to Simpang Kuala where you can get a local bus for around 25000 Rp/person (Jul 07). From Polonia airport to Pinang Baris or Simpang Kuala, you can use local minivan 'Sudaco'(rarely)for a 2000-3000 rp. If you don't have enough time to wait for the 'Sudaco', you can use 'Becak Mesin' which is available just outside the airport to go to Pringgan. Pringgan is the easiest place to get 'Sudaco' to Pinang Baris, Simpang Kuala or any other places in Medan. The common price for 'Becak Mesin' from airport to Pringgan is 10000 rp/trip. Bus to Berastagi takes about 2 hours. The common bus names are Borneo, Sutra, and Sinabung Jaya. The fare is 10000 rp/person (September 2008). There are busses und both directions all around the clock. (After 9pm only the minivan-Style busses).


WHAT TO SEE AND DO IN BERASTAGI

A climb of Gunung Sibayak is a must. A guide is not required and would probably take away from the experience. Catch a bus to the bus terminal at the bottom of the mountain. If short on time you could get dropped off up higher as the lower part is road and not as scenic. Ask your hotel which bus (some leave from the flower market). The Walk starts off by ascending sharply and really doesn't stop climbing until you reach the 2000m summit. It is a tough walk and water and snacks are a must, but those with a basic level of fitness should be able to complete this with rests along the way. Three hours from start to summit. The road is paved the entire way up and it is impossible to get lost on the way up.

The crater of Gunung Sibayak is filled with rocks that tourists have inevitably made into all sorts of shapes and words. From here, a good way to descend the mountain is to head off over the far side of the crater (3 o clock) down some very slippery surfaces. Beware though, there are some who have ended up getting seriously lost. In particular, avoid the trail that heads behind the antenna hill; you want to be heading down the opposite direction. Be extra cautious in foggy weather. Alternatively walk back the same way you came and about 45 minutes from the summit a road veers off to the right. This will bring you to Semangat Gunung, the hot springs village. From here, transport back to Berastagi is as easy as jumping on the first bus seen, last one around 6pm. Watching the sun set over the volcano you just climbed from the roof of the bus is magic.

You can also go to Gunung Sinabung, the easiest way is to take a minibus to Danau Kawar (a lake at the foot of the volcano) and then hike up (you should ask for directions as the beginning is not obvious). After the initial pass through the farms the path is impossible to miss (although the usual stories about lost/dead tourists exist and are listed at the tourist information office in BerAstagi), so no guide should be necessary. Good views from the top and excellent walk through the jungle (the walk up to Sibayak is not quite so pleasant).

WHERE TO STAY AT BERASTAGI