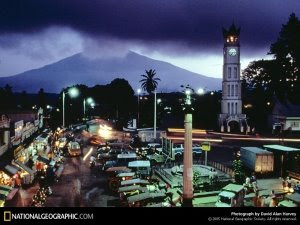 There are some interesting legends surrounding the foundation and naming of “High Hill” Bukittinggi. The city has its origins in five villages which served as the basis for a marketplace. The city was known as Fort de Kock during colonial times in reference to the Dutch outpost established here in 1825 during the Padri War. The fort was founded by Captain Bauer at the top of Jirek hill and later named after the then Lieutenant Governor-General of the Dutch East Indies, Hendrik Merkus de Kock. The first road connecting the region with the west coast was built between 1833 and 1841 via the Anai Gorge, easing troop movements, cutting the costs of transportation and providing an economic stimulus for the agricultural economy. In 1856 a teacher-training college (Kweekschool) was founded in the city, the first in Sumatra, as part of a policy to provide educational opportunities to the indigenous population. A rail line connecting the city with Payakumbuh and Padang was constructed between 1891 and 1894. During the Japanese occupation of Indonesia in World War II, the city was the headquarters for the Japanese 25th Army, the force which occupied Sumatra. The headquarters was moved to the city in April 1943 from Singapore, and remained until the Japanese surrender in August 1945.

HOW TO REACH BUKITTINGGI

Bukittinggi is located about 2 hours north-east by road from the international airport. The only way to get there is by car. But all the roads are good and smooth.

Known by the locals as "Travel" is cheapest way to get there. The approximate price is about IDR 25,000/person for one way. The vehicle is a Honda Odyssey 2.4 minivan with a capacity of 7 seats. Keep in mind that the bus driver usually waits until the chair occupation is about 75%. Once the car is "full", the minivan will depart and take the passengers to their destination.

DAMRI is the bus operator that goes to Padang (price $Rp 17.500) from there you can continue to Bukittinggi by minivan ("travel")for the price $Rp 15,000. Not recommended for those who don't want to stop at Padang.

At BIM(Bandara International Minangkabau)-International Airport of Padang, there's an official desk where you can order a taxi. The trip price is fixed and you can't bargain. This is the better and faster way of getting a taxi. A taxi trip to Bukittinggi is $Rp 185,000. You pay 50% of the cost to the driver when getting in and the other 50% at arrival(January 2006). Recommended for small groups up to 4 people.

WHAT TO SEE IN BUKITTINGGI

Bukittinggi is a small town, so these places are within walking distance with each other (15-30 minute walk).

Around town=== There are two tours that hotels and Tour agencies try to push, a tour to Minangkabau and another tour to Maninjau.

The Minangkabau tour will visit these places in east area of Bukittinggi:

The Maninjau Tour will visit places in west area of Bukittinggi:

Each tour requires at least 6 hours and usually held from 9AM to 3PM (including a stop at some restaurants). In 2006, the price is ranging from Rp 100,000/pp to Rp 160,000/pp or Rp 450,000/car for up to 6 people. Hire a car is highly recommended if you're in a group of more than 4 people. Car's price includes driver, fuel, entry ticket, and parking fee. Tips aren't compulsory, lunch invitation is more than enough. For your note, most of the places require ticket and will charge a parking fee. One tour will require about Rp 40,000 only for parking and ticket entry. Another option is hiring a car and arranging with the driver to visit the places in Minangkabau and Lake Maninjau. If you are alone, it is also possible to find guides in the Sianok Canyon park who will take you to Lake Maninjau with a motorbike (ask for Parta e.g., no fixed price, he will take what you give him). In any case, depart earlier, as the tour will take all day.

The budget option to Maninjau is to take the bus (or minibus) from the bus station (get there from the Bemo station near the market) to Maninjau (35km, 2hrs by bus, 1h by minibus). Unfortunately, a tourist racket has been set up so you won't get the ticket for the Rp 6000 (Oct 2007) the locals pay. Expect to pay at least Rp.10000 (Oct. 2007). Have the right change ready; don't expect to get any from the conductor. To get back, either try to catch a minibus (Rp 10000) or a big bus (Rp 15000-20000). The big buses you have to catch in the same direction you came, since the narrow road is a one-way for lorries.

The budget option to Minangkabau is to take the Batu Sangkar public bus for Rp. 7000 (Oct 2007) and hire a motorbike (Rp. 15000 return) from there (or walk the remaining 5km) to Pagaruyung. Minibuses and buses back to Bukittingi leave from the bus terminal or may be flagged down anywhere.

The Harau Valley is a pretty gorge about an hour east of Bukittinggi comprising a valley floor of rice paddy hemmed in by shear limestone(?) cliffs. There are several waterfalls with pools (both natural and constructed) for bathing, and you can go rock climbing on the cliffs. Overnight accommodation is available at the pleasant Echo Homestay, ☎ +62 752 77 50306 (unreliable). Rp. 300,000. , which is unlikely to have many guests except on weekends. Harau is reached via Payakumbuh. Another telephone no. mobile of Pak Adek is +628126730609

If you are interested in visiting the equator, you can take a bus to Bonjol where there is a monument marking the equator built over the main road, good for photo opportunities if you are keen to stand in both hemispheres simultaneously. There's also a museum on the site which houses a few artefacts of little interest - mainly coins and banknotes. Catch the bus from the Aur Kuning bus station, minibuses depart fairly frequently. Expect to pay Rp. 10 000 as a tourist. To get back there is a bus which comes from the opposite direction (or northern hemisphere) at 5 o'clock, or alternatively you can wait at the small roadside cafe right next to the monument where locals will help you flag down a bemo which is destined for Bukittinggi (its quite difficult for non-locals to distinguish between a service bemo and a someones car, but the locals seem to know what is what.)

There is the Galang Karsa Karya (the GKK). The tour organizer. They offering something different, an exploration journey to defeat the Bukittinggi's land. Taste the truly satisfaction by learning in nature, among bushes, when riding on the unsmooth wet land or when you are covered by mud or even when you get stuck in swampland. Get close to their land in a simple detail while standing on the green open field. Grateful for a day in the open air.They packages are trekking, bicycle trekking, heavy motorcycle trekking, bamboo kayakking, rafting, rock climbing, camping and paragliding. contact them at Galang Karsa Karya (the GKK). Jl. Bagindo Azischan No. 7c, Bukittinggi - 26116, West Sumatera email : [email protected] +628 16 1145796

WHERE TO STAY AT BUKITTINGGI

The top hotels in the city are the The Hills Bukittinggi (formerly the Novotel Coralia) and Pusako Hotel. Although The Hills Bukittinggi is comfortable place to stay especially for tourists from the West, the cost is at least Rp 750,000 for a night; in comparison there are many small hotels around Fort de Kock that are around Rp 120,000 that are quite nice.

Small budget hotels are easy to find. Many locals offer accommodation which are like family-owned hotels that provide a "feel at home" atmosphere. The prices span from Rp 40,000 - Rp 200,000 per room without air-conditioning. Breakfast is included. There are no lifts in these small hotels, so be prepared if your room is on the upper floors. Room cleaning is not provided everyday in some cases, so don't hesitate to ask the hotel manager if you want a daily cleaning service.