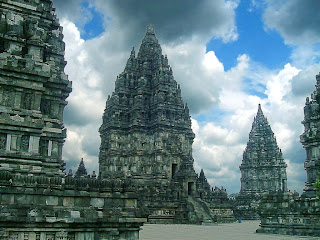 Prambanan is a collection of massive Hindu Temples (candi) built by the 10th century Mataram Kingdom, rulers of central Java and defeaters of the Sailendra Dynasty. A UNESCO World Heritage Site, in most any other country constructions on the scale of Prambanan would be quickly designated as a national symbol, but in Indonesia they are somewhat overshadowed by the even more awe-inspiring bulk of Borobudur just next door. The two sites are quite different in style though, with Prambanan being a collection of sharp, jagged pyramids instead of the vast horizontal bulk of Borobudur, and both are well worth a visit.

HOW TO REACH PRAMBANAN TEMPLE

The nearest major city is Yogyakarta, 17 kilometers away. Solo is also within easy striking distance.

Yogyakarta's airport is just ten kilometers from Prambanan. A taxi direct to the site should cost about Rp 20,000.

TransJogja, Yogyakarta's newest bus service, also serves a direct route to Prambanan. The bus is air-conditioned and it costs Rp 3000 per person for a ride (as of 2008), regardless of the distance. Ask the attendant at TransJogja's bus stop for further details.

WHAT TO SEE IN PRAMBANAN TEMPLE

The main site of Prambanan contains four temples scattered about a large, landscaped park. The complex is open daily from 6 AM to 6 PM and entry costs a fixed US$10 (US$6 student), try to get there early to beat the heat. Guides can be hired at the ticket office, costs you Rp50.000 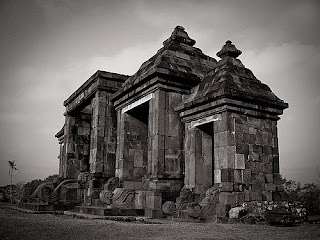 There are also several temples and historical sites outside the park.

Kraton Ratu Boko, 3 km south of Prambanan, is a ruined palace or temple of uncertain origin, located on a hilltop 200 meters above the Prambanan plain (which makes for good pictures if and only if you have a good zoom lens). Only some building foundations remain and it's difficult to make any sense of the site. Now incorporated into the Borobudur Park Authority, entry to Ratu Boko is a separately charged US$10, which seems very steep for what you get.

WHERE TO STAY AT PRAMBANAN TEMPLE

The neighboring village of Prambanan has a few simple losmen if you want to spend the night, but most visitors daytrip from Yogyakarta or Solo.

This post first appeared on Best Vacation Places Around The World, please read the originial post: here
People also like
Natural Remedies For Common Health Issues
The Top 5 Stress Relief Massage Techniques That Will Soothe Your Mind and Body
The Only 7 Exercises You’ll Ever Need to Tone Your Abs and Build Core Strength
New York Times Mini Crossword October 1 2022 Answers
How to Get Wavy Hair: 5 Quick Steps (Men’s Guide)
Chinese artist Forest Young announced the construction of the first Metaverse Temple
The Squad – Get Down Experience EP Vol. 3
The Squad – Get Down EP Vol 3 EP