The early May wine tasting of six Chardonnays from the Jackson Family of Wines took place online. Below is information about two of the Chardonnays, one from Alexander Valley Ava and the other from Sta. Rita Hills Ava.

Stonestreet Estate Vineyards is located in the Alexander Valley AVA. Stonestreet was created in 1995 by Barbara Banke and Jess Stonestreet Jackson. This vineyard estate consists of 5,500 acres in the Mayacamas Mountain Range in Sonoma County. Today the second generation, Christopher Jackson and his wife operate the estate. Lisa Valtenbergs is the winemaker.

At Stonestreet the winemaking protocols include: harvesting the grapes by hand, using native yeasts for the Chardonnays and fermenting Cabernets  in French oak tanks.

In the vineyards, Stonestreet supports sustainability. The vineyards are certified sustainable with Certified California Sustainable Winegrowing and Sustainability in Practice programs. Water use is carefully monitored and drip irrigation is used in the vineyards. Much of the vast estate is open space where animals and native vegetation are encouraged.

The 2017 Stonestreet Estate Chardonnay Alexander Valley AVA was produced with grapes that were harvested from vines planted in 1992, 1994 and 1997.

The winemaker used native yeast and the wine was 100% barrel fermented. 3600 cases of this Chardonnay were produced. The wine had 14.1% alcohol.

Terry’s Notes: This yellow colored wine had 14.1% alcohol. The aroma was of apple and pear. The taste was crisp with fruit including traces of pineapple, apple and pear. Think of a fruit salad. The mouthfeel was silky and the wine was full bodied. The finish was crisp and fruity with some mineral on the aftertaste. This wine retails for $40.

Kathy’s Notes: The wine was a light yellow color. The aroma was light with notes of minerality. The mouthfeel was smooth and there was a sense of butteriness.  An oak influence was apparent. The wine was dry and offered mineral notes. The finish was long and left the tastebuds wishing for one more sip.

Contact Stonestreet Estate Vineyards about virtual wine tasting and discover when the tasting rooms may open. 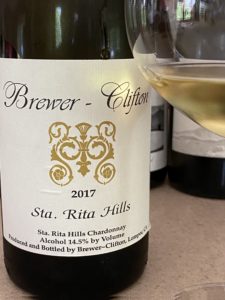 Terry’s Notes: This wine with 14.5% alcohol was a dark yellow color. The aroma was fruity. The taste included notes of tangerine, mineral and lemon with a lively mouthfeel. This is a medium/full-bodied wine. The finish was fruity with mineral notes. The aftertaste was long.

Kathy’s Notes: This Chardonnay from Sta. Rita Hills AVA was a light yellow color. The aroma was of citrus and mineral. The mouthful was velvety, smooth. The taste included citrus notes of oranges and lemon. The long, dry finish offered hints of minerality.

Chardonnay Day is celebrated on May 21st. Why not enjoy a Chardonnay this week?