A sightseeing trip to Turuvekere meets my holidays there - Chennakeshava Temple

I looked at the wide open ground opposite Basavannana Gudi. At its deep end was my Cousin's school. I remember going to it once. Was it for the lunch on Beterayaswamy's  Rathotsava [Chariot festival] ? I forget. And as the Tempo crossed it in a blur, I looked out for our favourite Shettara Angadi [Shetty's shop]. The shop stood perpendicular to the School. As children we would run down to this shop to buy red Kallusakkare [Rock/Candy sugar]. He would stock them in Amber coloured big bottles and would pack it in paper. And the pieces that went into our mouth would be small rocks. We would not even be able to suck them forget talking for a few minutes. Ah how I loved them! I love it even now. Was the shop still there? No idea. My mouth was tingling with memories of Kallusakkare.

In a heartbeat we had reached my cousin's home. The Tempo traveller  stopped in the open ground before the Chennakeshava Temple. "That is our house" I pointed to my group.  The mud coloured Mangalore tiled two storey 100 + year house stands at the top of the Brahmanara Beedi [Brahmin's street]. It is at the junction of the road from Basavannana Gudi and another road at right angles separating it from this open ground. It looked expectantly at us. We would go home later.

To the left of the ground was my Cousin's home a stone's throw from our house and we would be running to and from it at all times of the day, barefoot sometimes in hot summer with elders calling out "you feet will get burnt". One summer evening as the sun began his journey home, I remember my father, his brothers, his cousins, our cousins all playing a game of cricket on this ground. I can still see my father running in to bowl.

My aunt was waiting for us as we entered.  A quick introduction and freshening up done we settled down to guess what?  Yummy Kobbari Mithai and Kodbale. The Kobbari Mithai was again made of hand grated coconut. and Kodbale was what do I say? Tasty!  Everyone in Turuvekere grows Coconuts. These two are made from it and are staple snacks of Turuvekere.  I did a quick recee of our haunt.  The tap beside the washing stone was still a good 8 feet below ground level.  So, everyone from our home would come here to wash their clothes since water would be gurgling out of it throughout the day unlike the tap at our home. Blue colour flowers would bloom on the creeper languidly draped on the Chappadi Kallu compound. Did not see them now. Chappadi Kallu is Slap stone in English.  I never expected an equivalent for it in English. Wow!  The empty site on one side is now a garden with trees of all kind. On the other side my grandfather's sister lived. That was another must do everyday. But this cousin was their favourite. 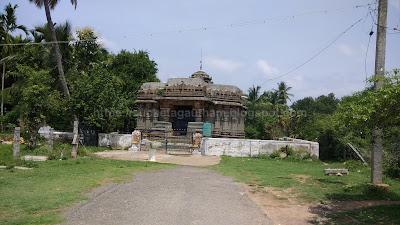 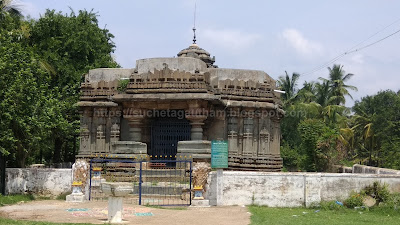 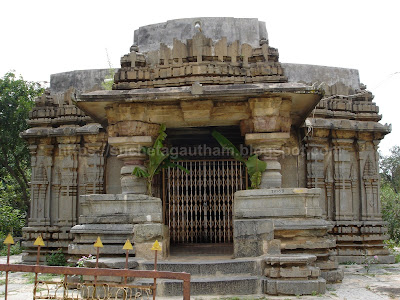 The priest had opened the Chennakeshava temple and we walked to it. "Oh so you are a Grande dame  now under the protection of  ASI, Archeological Survey of India. Some years ago, all you had was us children playing on your lap", I smiled at the Temple as we entered the gate. The open mukhamantapa [porch] has an awning held up by two half pillars. The porch with parapets on either side was where we would play for hours on end. There was a friend who would narrate an entire Kannada movie and we would all huddle around her and listen avidly. Some phrases still ring in my ears. This is from where I first heard the song "Tari Keri Yeri melay" from the Kannada movie Devara  Duddu. A cycle with wooden boards plastered with the movie of the poster was making its way in front of our house. And it was blaring this song.  We all had picked up that peppy song and returned from our holidays singing it.  I still love that song. And no, I have not seen the movie yet. 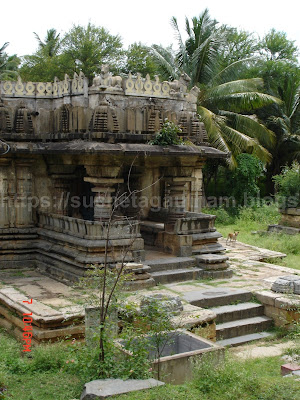 Mukhamantapa, zoom it to see the porch with parapets half pillars 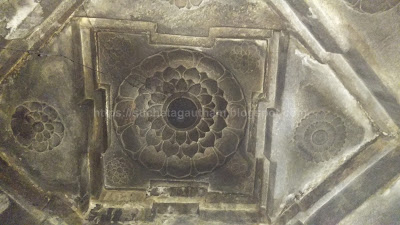 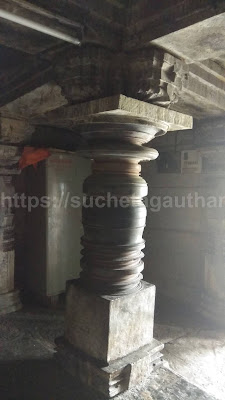 Flowers in the 9 bays in the roof

Pillar in the closed Mantapa

The mukhamantapa lead us into a dark dimly lit closed hall. It has always been dark and dimly lit. We would run in behind the priest, stand before the Chennakeshava in the Garbagriha and run out. The four pillars inside were dimly lit as we walked into the temple. The pillars hold up the ceiling and divide it into 9 decorative bays with fully open flowers carved in them. A small antarala [vestibule] connects this hall to the Garbhagriha. A black stone Chennakeshava dressed in green and holding a Conch, a Chakra, a Lotus and a Mace smiled at us in the glow of an oil lamp. Chennakeshava, beautiful Keshava in Kannada is indeed beautiful! "Chennigaraya" is again beautiful and that is what locals call him and the way they say, it is full of adoration. You must hear them say it. If it were a taste it would be Kallusakkare.  Keshava is Krishna and an avatar of Vishnu. Garuda, his mount is carved on the panel below.  The Utsava Murthy[portable diety] has Chennakeshava in Blue and his wives in Lavendar. If one of them is Rukmini who is the other wife of Krishna in this group? Must find out the next time I am in Turuvekere. 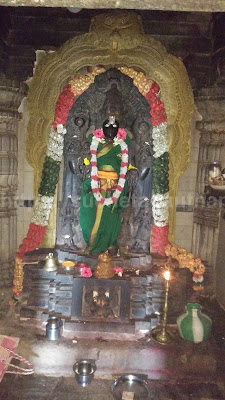 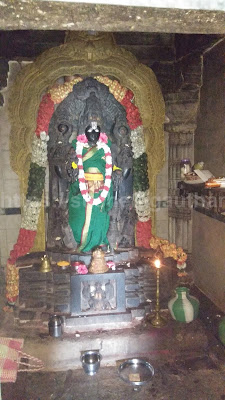 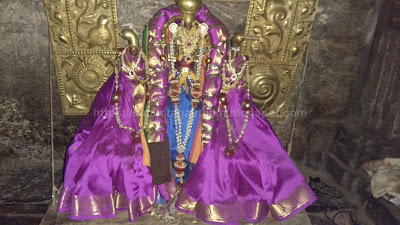 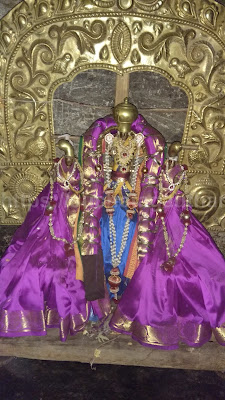 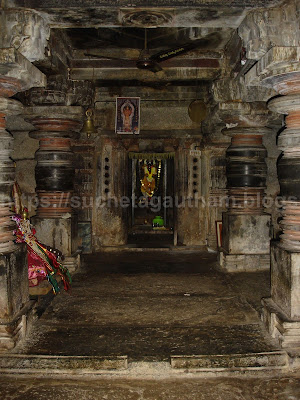 Closed Mantapa and Chennakeshava on another day

A flex board caught our eye. Somanna the Mahadandanayaka [Chief magistrate/ Chief of the armed forces] of Narasimha III built this temple in 1258 AD. Somanna is also credited with building the Somnathapura temple near Mysore. Somanna gifted the Chennakeshava Temple to a Brahmin, Kote Shankardeva of Turuvekere in his parent’s name. The names of the 5 Brahmin witnesses and the details of the villages given as gifts for the upkeep of the temple is inscribed at the top of a wall close to the roof. But I am happy all this was on the flex board because there was no such board outside. 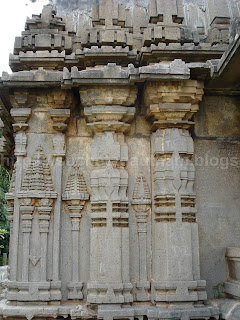 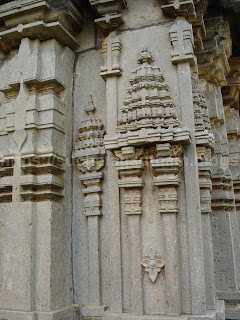 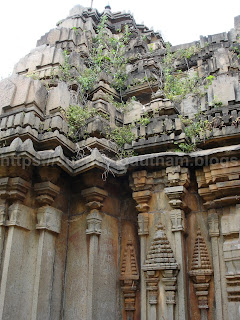 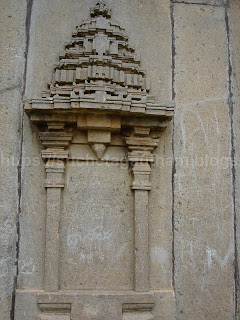 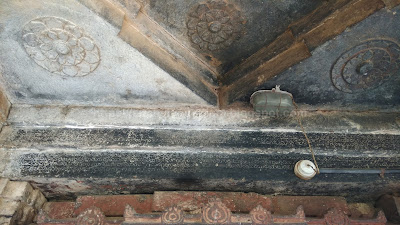 Zoom to see the inscription detailing the gift of temple etc

We had to take pictures seated on the lap of the Temple. So, we huddled over the seats in the porch and took pictures for posterity. I added it to memories of my huddles on this porch. It was time for the ritualistic pradakshina(circumambulation). We stepped on the Jagati, a raised platform all around the temple giving the devotee a circumambulation path. We could walk all around the temple on the Jagati now. When we were growing up, we could walk only a few meters on this jagati around the temple. Trees had encroached the temple on all sides. I remember my uncle saying the ASI had cut all of them down and cleared the whole area around the temple. We had not seen this renovation work. Must have been exciting and once in a lifetime opportunity for the residents. As we walked, we admired the small shrines and towers carved on the outer walls all around. The Ekakuta [single shrine/ spire] temple is built on a very visible semi- stellate base [semi star base] with Soap stone and the base comprises of five horizontal mouldings. The Antarala [vestibule] has its own spire, the Sukhanasi [tower] also called the "nose" of the main tower. 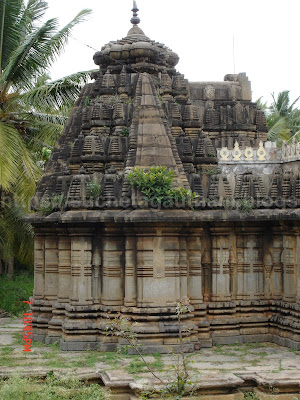 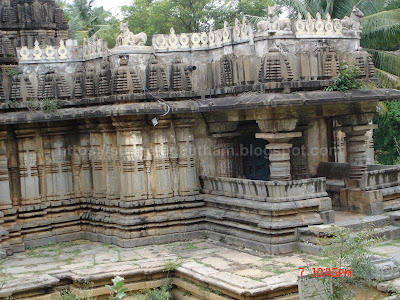 Side view with jagati and Porch visible 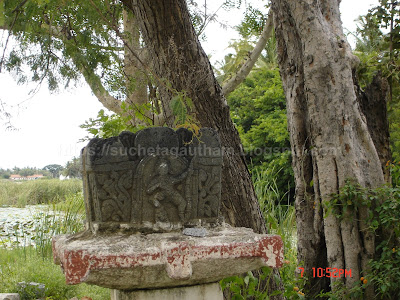 A sightseeing trip to Turuvekere meets my holidays there - Chennakeshava Temple