Conceptual impressions surrounding this post are yet to be substantiated, corroborated, confirmed or woven into a larger argument or network.

A point Describes the center of every circle. This point describes the nucleus at the heart of every field of energy. Metaphorically speaking a circle along with its centered point of origin describes a perfect geometry. The source of the circle is a point about which a field is inscribed in space and time. The center marks a circle's origin, its genesis, its nucleus, its spark. The center of a circle describes and pinpoints its source, the scope and the range of its creative influence.

inscribe verb [with object] (usually be inscribed)    1 write or carve (words or symbols) on something, especially as a formal or permanent record: .     • mark (an object) with characters:      • write an informal dedication to someone in or on (a book):     • archaic enter the name of (someone) on a list or in a book; enroll.     2 Geometry draw (a figure) within another so that their boundaries touch but do not intersect: Compare with circumscribe.

The field surrounded by pointed inscription is an extensions or enlargement of that which is central to its creation. By means of a compass the point becomes a circle. The compass is an instrument describing a pointed and linear action (projection) about which an arc or circle can inscribed and made apparent.

2.   an instrument for drawing circles and arcs and measuring distances between points, consisting of two arms linked by a movable joint, one arm ending in a point and the other usually carrying a pencil or pen.

What was once unseen is now seen, measurable and describable. The scope, range and extent of what can be created can now be made apparent within the circumference of the circle. The circle describes the limits or boundaries of the source's (center point) creative influence. The circle creates a border line that objectively represents the Concept of twoness (duality) by purposely distinguishing "insideness" from "outsideness", light from dark, matter from wave, consciousness from the unconscious and meaning from purpose. (Note: Keep in mind while pondering metaphorically upon these events that you are both an observer and creator of the same secondly, the border line is merely a veil made cognitive and apparent by choice.)

3 [in singular] the range or scope of something: the event had political repercussions that are beyond the compass of this book. • the enclosing limits of an area: this region had within its compass many types of agriculture. • the range of notes that can be produced by a voice or a musical instrument: the cellos were playing in a rather somber part of their compass. 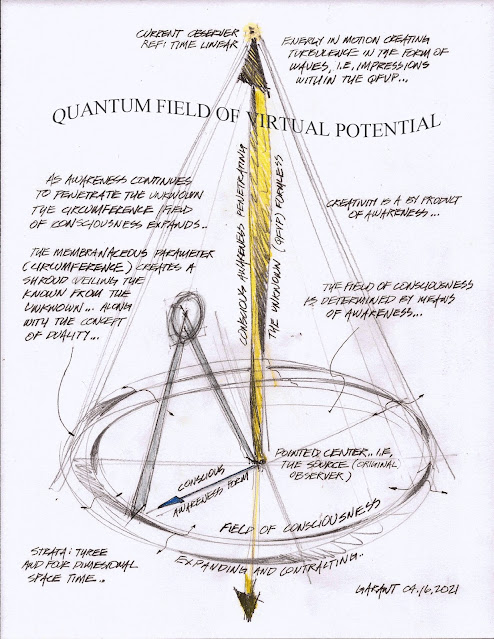 A point remains a point until projected beyond its "original position"  and to reach beyond the limitations and constraints surrounding its birth and origin.

A Quantum Field of Virtual Potential (QFVP) harbors every concept of perfection along with the dualistic/linear processes/methodologies required to experience/attain it. Design re-presents the symbolic and metaphorical circumstances and situations needed to acquire a pointed awareness as required of consciousness. 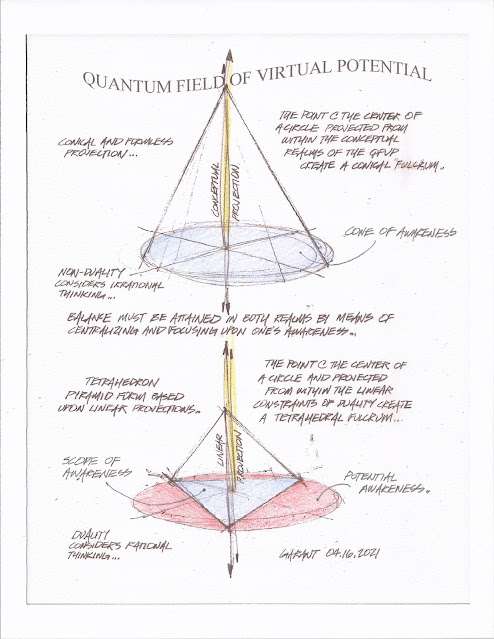 Conceptual in essence the conical Fulcrum is based upon abstract ideas, general notions and impressions. Based upon a plan, intention or conception, a mental picture or groups of objects or impressions, experimental models and testing modes of thinking and/or feeling. Beliefs, hypothesis, opinions, images, convictions and abstractions.

Concepts are defined as abstract ideas or general notions that occur in the mind, in speech, or in thought. They are understood to be the fundamental building blocks of thoughts and beliefs. They play an important role in all aspects of cognition.[1][2] As such, concepts are studied by several disciplines, such as linguistics, psychology, and philosophy, and these disciplines are interested in the logical and psychological structure of concepts, and how they are put together to form thoughts and sentences. The study of concepts has served as an important flagship of an emerging interdisciplinary approach called cognitive science.[3]

In contemporary philosophy, there are at least three prevailing ways to understand what a concept is:[4]

Concepts can be organized into a hierarchy, higher levels of which are termed "superordinate" and lower levels termed "subordinate". Additionally, there is the "basic" or "middle" level at which people will most readily categorize a concept.[5] For example, a basic-level concept would be "chair", with its superordinate, "furniture", and its subordinate, "easy chair".

When the mind makes a generalization such as the concept of tree, it extracts similarities from numerous examples; the simplification enables higher-level thinking.

A concept is instantiated (reified) by all of its actual or potential instances, whether these are things in the real world or other ideas.

Concepts are studied as components of human cognition in the cognitive science disciplines of linguistics, psychology and, philosophy, where an ongoing debate asks whether all cognition must occur through concepts. Concepts are used as formal tools or models in mathematics, computer science, databases and artificial intelligence where they are sometimes called classes, schema or categories. In informal use the word concept often just means any idea

All modes of cognition are based on mental, emotional, physical and spiritual patterns.

Concepts are intuitively driven and made cognitively apparent by means of feeling.

Design fulcrums are synesthesiastic in character.

Balance can be attained by utilizing and implementing both the rational and conical fulcrums of perception and observation. Consciousness is an exercise in balancing each with the other.

The rational fulcrum represents linear thinking and emotional response. Dualistic in character and at times extreme in response, awareness can often appear to be a black or white issue. Balance can cause extreme reactions, misrepresentations and/or ill thought due to a lack of flexibility, adaptability and sequential thinking. One issue may have simply followed another in the past but everything changes - every situation is different. Linear thinking can easily ignore or misinterpret changes in context and observation thereby exhibiting a lack of flexibility necessary when functioning and processing unknown variables.

THE COMMON POINT OF AWARENESS

Each fulcrum comes to a point that corresponds with the intentions of the observer. Perfect balance, i.e. focus, is often short lived, appears in an instant and is a challenge to discover and retain. Gainful awareness is the prize for attaining a productive focus through symbolic expression and expansion. Both fulcrums are pointed in their own unique way facilitating a symbolic POV in reference to every observer. In this way design assists and enables awareness (the center point in every circle) to expand, explore and grow within its own field of consciousness.

Perception is generic. Focus is imperative in every observation. Life is found in the present.

Balance is difficult to find, experience and retain for lengths of time because Life is founded upon the active process of "balancing". Dualities purpose: to seek greater balance through self conscious awareness.

Find your truth. Know your mind. Follow your heart. Love eternal will not be denied. Discernment is an integral part of self-mastery. You may share this post as long as author, copyright and URL https://designmetaphysics.blogspot.com/ is included as the resource and shared on a non-commercial no charge basis. Please note … posts are continually being edited over time. Copyright © 2006 - 2020 C.G. Garant. All Rights Reserved. (Fair use notice) You are also invited to visit https://designconsciousness.blogspot.com/ and https://sagariandesignnetwork.blogspot.com and https://www.pinterest.com

This post first appeared on Design Consciousness, please read the originial post: here
People also like
Portfolio Review: Happy Birthday, Paramount+!
Multi Level Marketing And How It Works
MICHELLE MONE IS A THIEF
Anxiety symptoms in men
The 15 Best Vancouver Restaurants
paris jackson RELEASES NEW SINGLE “just you” OUT NOW - @ParisJackson
How culture drives behaviours
5 Ways To Splurge While On A Budget
Taiwan Leader Tells China War ‘Absolutely Not an Option’
The Russia-Ukraine Conflict’s Impact on Europe’s Economy and Living Costs, and the US role
Want to Age Well? Improve Your Balance With These 5 Exercises