Design Consciousness and the Quest for Balance and Harmony

Conceptual impressions surrounding this post are yet to be substantiated, corroborated, confirmed or woven into a larger argument or network.

What are some of the patterns of thought that bring Design Consciousness to awareness?

10 Tips for Dropshipping Success
Why you should journal regularly
Mindfulness and Weight Loss
Best 10 Food Delivery Apps to Satisfy…
Popping blackheads on nose
symbolism  noun: the use of symbols to represent ideas or qualities: • symbolic meaning attributed to natural objects or facts. • (also Symbolism) an artistic and poetic movement or style using symbolic images and indirect suggestion to express mystical ideas, emotions, and states of mind. It originated in late 19th century France and Belgium, with important figures including Mallarmé, Maeterlinck, Verlaine, Rimbaud, and Redon.
symbols noun: a mark or character used as a conventional representation of an object, function, or process, e g. the letter or letters standing for a chemical element or a character in musical notation. • a shape or sign used to represent something such as an organization, e.g. a red cross or a Star of David. a thing that represents or stands for something else, especially a material object representing something abstract:
signs noun: a sign of affection: indication, signal, symptom, pointer, suggestion, intimation, mark, manifestation, demonstration, token, evidence; literary sigil. a sign of things to come: portent, omen, warning, forewarning, augury, presage, danger sign; promise, threat. at his sign the soldiers followed: gesture, signal, wave, gesticulation, cue, nod. he read the sign on the wall: notice, signpost, signboard, warning sign, road sign, traffic sign, guidepost, marquee. the dancers were daubed with signs: symbol, mark, cipher, letter, character, figure, hieroglyph, ideogram, rune, emblem, device, logo.
analogy  noun: (plural analogies) a comparison between two things, typically for the purpose of explanation or clarification: • a correspondence or partial similarity: • a thing which is comparable to something else in significant respects • Logic a process of arguing from similarity in known respects to similarity in other respects. • Biology the resemblance of function between organs that have a different evolutionary origin.
metaphor  noun: a figure of speech in which a word or phrase is applied to an object or action to which it is not literally applicable:  • a thing regarded as representative or symbolic of something else, especially something abstract
simile  noun: a figure of speech involving the comparison of one thing with another thing of a different kind, used to make a description more emphatic or vivid (e.g., as brave as a lion, crazy like a fox). • the use of simile.
allegory noun: (plural allegories) a story, poem, or picture that can be interpreted to reveal a hidden meaning, typically a moral or political one: • a symbol.
Design Proposition:
design + consciousness = awareness
awareness + design = consciousness
consciousness + awareness = design
DESIGN AS METAPHOR
Modeled within the parameters of space and time design might best be represented as a simple fulcrum where the concepts of meaning and purpose are "weighed in reference to each other". Design is the pivot and consciousness the lever in the search for balance and harmony. Design creates the axial point about which an Observer views every situation and circumstance.
Design plays a central role in recognizing, describing, understanding, measuring, perceiving, observing and comprehending the concept of consciousness.
Finding what is meaningful and purposeful in Life rests upon finding and maintaining a balance between these two conscious agents.
meaning noun what is meant by a word, text, concept, or action:     • implied or explicit significance:     • important or worthwhile quality; purpose: adjective [attributive] intended to communicate something that is not directly expressed:
purpose noun  the reason for which something is done or created or for which something exists:     • a person's sense of resolve or determination:     • (usually purposes) a particular requirement or consideration, typically one that is temporary or restricted in scope or extent: 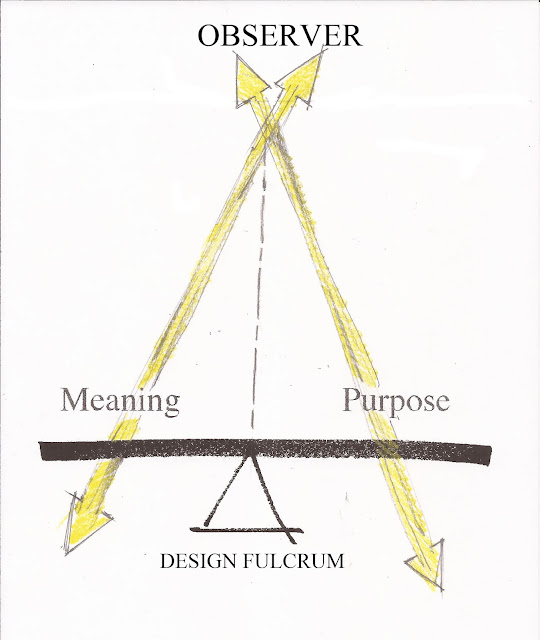 Design is essential in acquiring a greater understanding of consciousness. Design is the instrument an observer employs in order to monitor changes in consciousness. Design brings sovereignty to the observer. Design is the instrument that provides, substantiates, sustains, maintains, validates, assists, and encourages creativity.
Design and consciousness are analogous, kindred equivalents engaged in a dualistic relationship, partners in a dance of energy in motion, witnesses within a quantum field of virtual potential (QFVP).
Design is the point upon which the lever of consciousness rests and is supported, the fulcrum where contrasting components can find balance, stability, permanence and unity through awareness.
DESIGN + CONSCIOUSNESS = AWARENESS
awareness noun  knowledge or perception of a situation or fact:     • concern about and well-informed interest in a particular situation or development:
Awareness is a product of both design and consciousness. Awareness is a facet, a characteristic, a component, a dimension and a feature of consciousness observed in alignment with design. Awareness is central to consciousness and at the "point of Design".
In order to become balanced one must become aware.
In order to become aware one must become balanced.
Awareness is at the central intersection of consciousness and design.
The hub, the linchpin, the focus and the nucleus at the heart of pure wholeness.
The observer discovers meaning and purpose by means of awareness - making it one in the same. 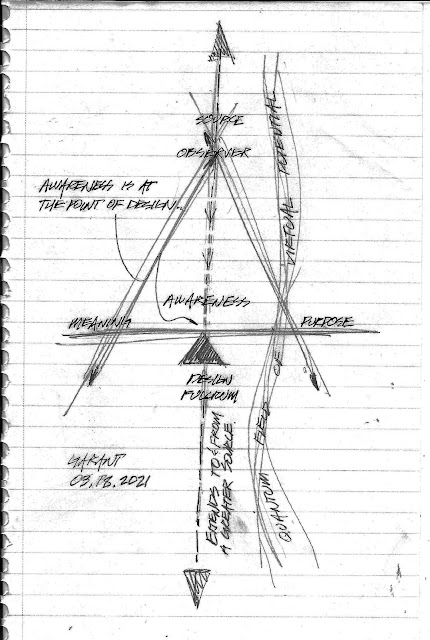 This post first appeared on Design Consciousness, please read the originial post: here
People also like
10 Tips for Dropshipping Success
Why you should journal regularly
Mindfulness and Weight Loss
Best 10 Food Delivery Apps to Satisfy Your Hunger
Popping blackheads on nose
8 Things You Didn’t Know About Video Marketing For E-Commerce
Heal Your Body Meditation.
The Fundamentals of Ethical Design
10 Australian Brands That Are Popular Worldwide
Startup Fashion Week Returned For Year Nine in Toronto - @StartupFW
How Can You Do Low-Cost Promotion with Fabric Tote Bags?
Shipwrecked Fishermen Who Battled Sharks with Their Bare Hands Saved by Coast Guard
The Top 7 Stress Relaxation Techniques and Their Benefits

Design Consciousness and the Quest for Balance and Harmony