Working from home is ruff. Dooglers make it a little better.

In December 2011, a small ceremony was held at a previously unnamed cafe at Google’s Mountain View campus. The NoName Cafe in building 43 would no longer be nameless: It would henceforth be known as Yoshka’s Cafe, in honor of Google’s original Top Dog, and the first dog to ever visit Google’s campus.

Yoshka belonged to software engineer and long-time Googler, Urs Hölzle, and his wife, Geeske. Urs first started bringing Yoshka to work in 1999, his first year at Google, when Geeske had to go to Europe for a few months. At the time, he remembers, working from home wasn’t feasible because his internet connection was too slow. “DSL was barely working, and I couldn’t leave Yoshka at home,” he says.

Luckily, his pup was more than welcome at work. “He was a sweet dog, so the reaction was really positive,” Urs says. “There was one person in the office who was afraid of dogs, but Yoshka quickly grew on him, and he recognized that Yoshka was big but not dangerous!” Yoshka was friends with everyone, even people who delivered packages to the office.

Yoshka passed away in 2011, but his legacy lives on. Yoshka’s Cafe includes a small museum dedicated to the Leonberger who had been well-known (and loved) by Googlers. Yoshka’s favorite toy, a fluffy ball, and his collar are on display, along with his Google badge. A small plaque on the podium explains that it was Yoshka who helped Google become “a dog-friendly company.” 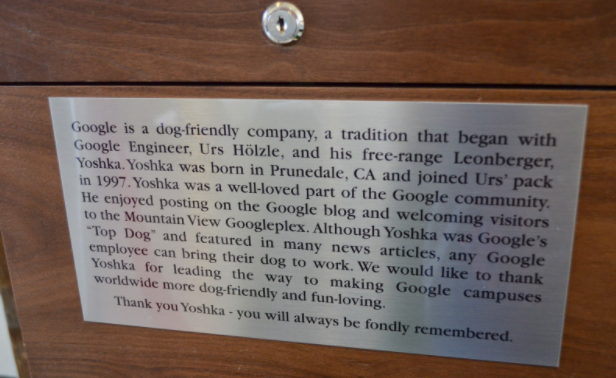 Not only are dogs still welcome at Google offices, there’s even a dog park at the Mountain View campus called The Doogleplex. Pups have become an integral part of Google culture—so much so, that even as we work from home, Googlers are still supporting that canine connection.

One of the most important parts of Google’s dog-friendly atmosphere is the Doogler group, a Googler employee group and message board, which for some has become an even more important asset while they work from home. There are different groups for various locations, and even some for specific breeds, but the original Doogler group was created two years ago by Aida Martinez, who figured that Googlers and their pups could benefit from a centralized online forum.

Aida has two dogs, Honey and Mia, who often accompanied her to work at the London Google offices. “I brought them to work since Mia was a 4-month-old puppy,” Aida says. “I rescued Honey when Mia was 1, and then she also started coming to the office at least once a week.” In addition to starting Dooglers, Aida also helped with dog-related events, like the London office’s puppy pop-up, where Googlers brought their pups in for other employees to take a break with.

Googler Danielle Feller also participated in similar events held in one of the New York offices. “You signed up, and went into a room with four puppies and you could just...roll around with them for 15 or 20 minutes,” she remembers of the Puppy Therapy Program. “It was so cute!” Shortly after, Danielle started thinking about how to bring the pop-ups to more of the New York locations, and to make sure that Googlers who didn’t have dogs could be the first to benefit from some play time.

In February, Danielle teamed up with Ann Stout and Dena Soukieh, two Googlers she’d met through the Puppy Therapy Program, to host more “puppy-pop” sessions. Danielle’s own dog, Oso, also participated, which had an added bonus for Danielle: “As great as it is to have my dog at work, when he’s at my desk, I get less done!” she says. “So many people want to come pet him and see him, so this was a nice way of giving him play time with my coworkers.” 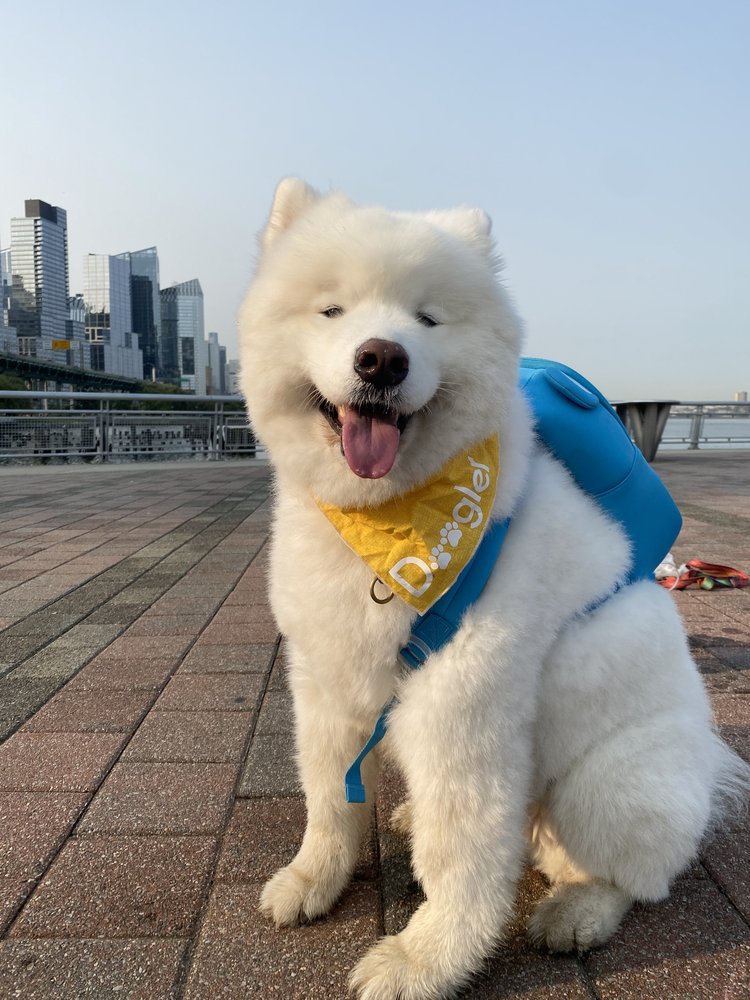 Oso wearing his backpack and Doogler bandana to the office. The term is so popular at Google that dog owners often get “Doogler” swag for their pets.

Now that most Googlers are working from home, the Doogler groups have figured out ways to bring some of the company’s dog-friendly atmosphere into the home. In June, Danielle helped organized a Virtual Pet Parade over Google Meet. “Each pet got one minute to be introduced and spend some time on screen, showcase a fun fact or trick, and then make room for the next one to be featured,” Danielle says. Slots filled up quickly, mostly with dogs, and the event also featured a shelter that was looking for foster homes and a Googler from the San Francisco office to introduce his foster dog.

The event was a hit—and even inspired other events, including one attended by nearly 800 Googlers located in the Asia Pacific area and another for those in California (though of course, Googlers anywhere can join). Ray Lader, who works as a Community Lead in the San Francisco office, recently held the Bay Area WFH Strut with a group of coworkers, which also featured a foster agency followed by intros of Googlers’ pets. Danielle says she noticed that a benefit of time at home is that more Googlers have decided to foster and adopt pets—and those new pet parents have a great resource at their fingertips. “The Doogler group is so collaborative,” she says. “It’s just a group of people who really care about their dogs and animals in general.”

One of those people is Max Dzitsiuk, a software engineer who works on augmented reality algorithms. While he usually works from the San Francisco office, he’s currently living and working in his home country of Ukraine. Before he moved to San Francisco to begin working at Google, he volunteered at a dog shelter in his hometown. “Once I moved to the U.S., I used some of my Google volunteer time to work at Bay Area shelters,” he says. He also joined the Doogler group. Instead of adopting, Max is dedicated to fostering dogs that he finds permanent families for; he often brought his fosters to the office. “My team liked to stop by my desk and play with the dogs.” 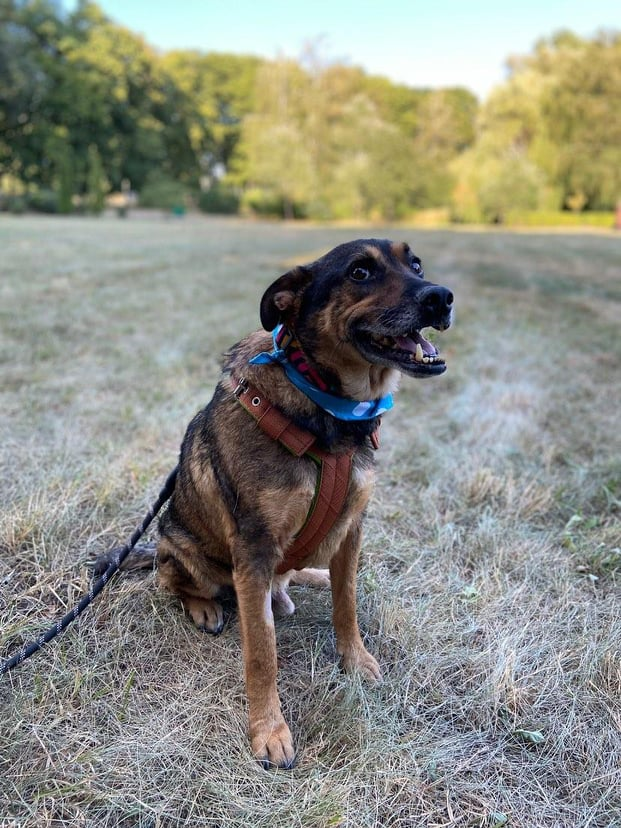 Max most recently fostered Zub, who will be moving to the U.S. (where he’ll be adopted) thanks to donations from the Doogler group. “He spent all of his life in a shelter near Kyiv,” Max says. “Despite not living with people much, he’s a very gentle and loving dog.”

While in Ukraine, he’s using the Doogler group to promote the work he’s doing with rescues. He recently shared that he’s raising funds to bring four rescue dogs to the U.S. “Thanks to the Dooglers, we were able to finish up all the necessary tests and treatments the dogs needed before making their long journey,” he says. “I can’t wait to post an update about their trip. I’m so glad to be working with people who care about this issue.”

Even while working from home, Googlers have still found ways to “bring” their dogs to work and involve them in “office” life. And given the circumstances, it seems we’re all better for it. “It’s not hard to feel happy when you just look at them. They’re so friendly and fun to be around; that’s why people have emotional support animals,” Urs explained, when I asked why dogs are such a welcome presence at Google. “It’s a good thing to have friendly faces around the office who just want to be around you and are happy to be petted and get your attention.” And the same applies to our home offices, too.

Working from home is ruff. Dooglers make it a little better.