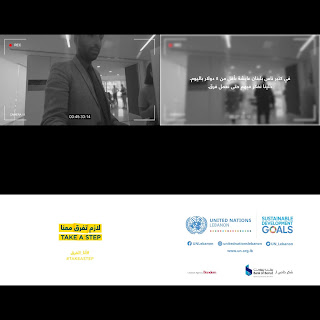 Now, here's an interesting ad in the worst possible moment.
Customers go to a Bank ATM and try to withdraw money. The only option is 4 USD or 6000 LBP. After much commotion the bank employee comes and suggests many options then asks "what? 4 USD is not enough?" - then it is revealed that this is the poverty line under which many Lebanese live per day. There is even a tag in the end #TAKEASTEP (even if the Arabic line is much better really "we should give a damn"). Now, where's my hiccup?
Lebanon has been having many - many - erratic banking strategies. Sometimes you go to your bank and the teller tells you "no, there's a new directive you cannot withdraw that much cash", sometimes you go to the ATM and - again - you are capped. You banker will give you 19,367 reasons why he cannot convert your Lebanese money into Dollars, or alibis as to why you cannot send international money in Dollars, or the Western Union agency is now obliged to get money in Lebanese while the government keeps the Dollars and so on. So watching the ad, my heart - litteraly - sank: What now? I kept thinking! And even when the revealer came indicating the government is not giving my bank account a haircut or anything, I was still upset at the ordeal I was just put through.
So the ad is nice, but truly this is the worst time to put it on TV what's with new regulations popping up weekly! Make that daily!