I shall not be comparing the two major makes of domestic stand mixer but two specific models: The Kenwood Chef KMC570 mixer vs KitchenAid KSM150PSER Mixer.

You may have noticed that domestic appliances are being designated longer and longer names and numbers so purely on name, the Kitchenaid wins it by four digits!

Kenwood is THE name in mixers because it has been around the longest and it is so well-known that it is the first brand we think of when we hear the word ‘mixer’. Click here to Read Kenwood Chef KMC570 Mixer Reviwe

This particular model retains the ‘Chef’ in its full name because, from a marketing point of view, Kenwood know that as soon as they give their mixer that particular name, it’s going to be taken seriously.

This is a powerful machine with 1000W motor. This means that of the two, it is the one for you, if you are into bread-making. The KitchenAid only has a 325W motor but will nevertheless do the majority of your kitchen mixing jobs without any problem whatsoever.

The Kenwood, in keeping with all of its other models has three power outlets which means that you can use it as a nucleus for all sorts of other kitchen jobs. The Kenwood range is designed in a modular way which means you can add attachments to enable you to do everything from mincing meat to grinding, slicing, shredding and even squeezing. So, although from the robustness point of view, the Kenwood Chef stand mixer wins hands down. It is more or less a draw on the bolt-on stuff, because the KitchenAid has a multipurpose attachment hub which accepts 15 different KitchenAid attachments

However, what the KitchenAid misses in sheer power, it makes it up as far as design is concerned. Whilst Kenwood retains its conservative image , this one comes in all sorts of colours as long as they’re silver! The KitchenAid has over 20 colours available so you can always find one which fits in with your kitchen décor. Whereas as with most other Kenwoods, you are limited to neutral colours, which supposedly fit any kitchen.

Both of these models retail at about £200 so pricewise there is very little difference. They both have a similarly sized bowl with a KitchenAid being slightly bigger, in spite of its smaller motor. Rather confusingly, the KitchenAid gives its volume in quarts. You may be interested to know that it’s 5 quart bowl is equivalent to 5.7 L. Always remember that the actual usable volume is about 1 litre less.

Continuing the Imperial v Metric specifications, the KitchenAid weighs in at 22 lbs (10 kilos), whereas the Kenwood weighs in at 8 kg (17.6 lbs).

One of the aspects of the KitchenAid which makes it score over the Kenwood, is the tilt back head for easy access to the bowl.

Manufacturers have recently been of the opinion that one of the great selling points for mixers is the  number of speeds they have. The Kenwood specifications states that it has “variable” speeds whereas the more brash KitchenAid simply states “10 Speeds”.

Although the prices of both machines are generally, on a par, it is well worth looking around because the KitchenAid can be up to £100 more expensive in some outlets.

Looking at general reviews of the Kenwood, the most often used adjectives are solid, heavy, metal and weighty. That is in spite of the fact that it is a full 2 kg lighter than the KitchenAid. Nevertheless, it is the Kenwood, which is Amazon’s number one bestseller.

Let’s have a look at what’s “in the box” for each mixer.

The Kenwood scores a little higher, with a beater, a balloon whisk, dough hook and a rubber creaming beater. It also has an additional 1.6 L “thermo-resist” blending bowl as well as a splash guard, a spatula and something apparently very popular with the buying public: a recipe book!

One of the most common complaints about the KitchenAid is that it doesn’t quite mix all the way to the bottom of the bowl and the manufacturers reasons for this is that it is not a good idea to mix everything right at the bottom of the bowl because that will inevitably lead to wear on the beater as a result of friction. However, it does mix to within the thickness of an average coin, which is good enough. As a test, any mixer should be able to beat a single egg to stiff peaks consistency and this one does it with flying colours! Luckily, though, if there are problems, there is an adjustment screw with which you can vary the height of the mixing assembly.

Some of these mixers used to stop working quite soon after purchase, but apparently in the last couple of years, this unfortunate tendency has more or less stopped. The rule of thumb with all mixes is low speed for dough, medium speed for batter, and high-speed for creaming. If you attempt to use ,for instance a  high-speed for mixing bread dough, don’t expect the motor to last very long! 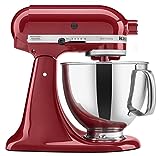 The Kenwood on the other hand, appears to be fault-free apart from comments about its styling and size. Perhaps this is a mixer which is best left out on a worktop rather than being lifted in and out of the kitchen cupboard. That must be a psychological issue, because there are no such comments about the more stylish KitchenAid which is 2 kg heavier.

So which one is the best stand mixer. Kenwood or Kitchenaid? Without doubt the Kenwood is the more powerful and more versatile and is sold with a CD full of recipes. On the other hand, the KitchenAid appears to have more design in it – even little touches, such as a handle on the stainless steel bowl are useful, but its motor is only one third of the strength of the Kenwood. Having said that, there appear to be no reports of the KitchenAid burning motors.

Finally, coming to the ultimate question….. Which one would I buy as a wedding present from my sister? It will have to be the KitchenAid……. And that’s only because I find it more stylish, more pleasing to the eye and certainly more of a design statement than the clunky-looking Kenwood.

Get Your Business Done in San Ramon