Hello to all my loyal readers and to those of you who just dropped by, hope you all find yourselves well.
In a post I wrote a while back, I sang the praises of an Indian restaurant I'd gone to with my kids called "a taste of India", which entailed an anecdote regarding my confusion with chicken tikka.  Recently I've been thinking about this dish and realized what I meant to order was "chicken tikka masala".  I used to order this dish at a restaurant in Brooklyn called "India Passage".  They served Indian cuisine and the cooking was excellent.  My ex-husband would take me there when we had an occasion to celebrate and my favorite thing to order was the "chicken tikka masala".   The only reason I ordered it at first, was upon the recommendation of the restaurant owner who was a good friend of my then husband.  I'd told him I couldn't handle too  much heat in my food (still can't) and he promised me I would love the dish he was going to  bring me and I did, so much so that I remembered it years later.  I suppose that's how you know you've acquired a new favorite when you just can't forget it.   I never knew chicken tikka masala could be so simple to prepare, but it is and below I have a recipe for chicken tikka masala that will blow you away.

I've put my own twist on this recipe, however it's not a far stray from the original and it tastes exactly how I remember it from "India Passage".   The intermingling of flavors in this dish is superb, a feeling of calm comes over you and you wish it would last forever.  Along with some naan and basmati rice, this may well be received as a comfort food.  Below find my recipe for chicken tikka masala.  This recipe calls for a mixture of flavorful, aromatic spices called "Garam Masala" which you can find in "halal" (Indian)  markets or perhaps "Publix" , if not you can make your own by mixing cumin, cardamom, cinnamon, cloves, coriander and black pepper corns to a fine powder.  Thank you for reading, leave a comment if you wish, take care and enjoy! 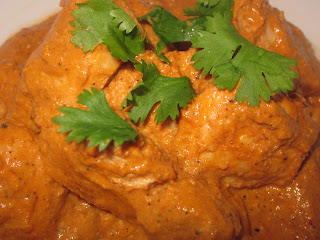 C
Chicken Tikka Masala
Marinade
1 cup of plain yogurt
1 tablespoon of salt
1 tablespoon garam masala
1 tablespoon lemon juice
Chicken Tikka Masala
1 cup of heavy cream
2 cups of plain yogurt
4 skinless/boneless chicken breast cut into cubes
1 can of tomato paste
2 tablespoons of Garam masala
3 cloves of garlic minced
2 tablespoons vegetable oil
salt to taste
I took a little shortcut in preparing the chicken for the marinade, I cut the chicken into cubes, mixed my ingredients for the marinade then placed the chicken into the marinade making sure all the pieces were covered with it.  I let it marinade in the refrigerator over night.  Next, I lined the grill with aluminum foil, fired it up and cooked my chicken on it. 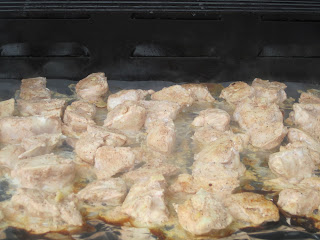 Once the chicken was golden on all sides, I took the pieces off the grill with a set of tongs and placed them in a large bowl.   Next I heated up a large pan added the oil then the garlic.  Let the garlic get golden then add the tomato paste.  Mix the garlic and tomato paste together then add the garam masala, let these ingredients incorporate in the pan on low heat for a minute or two.  Now you can add the heavy cream and salt, stir to mix ingredients, let simmer a bit.  Add the yogurt stirring mix until there are no lumps from the yogurt and it looks smooth.  Finally add the chicken, let this simmer for about fifteen minutes on medium/low heat.  If you feel you want more yogurt or cream feel free to add a little more, but don't go overboared or you'll lose flavor and have to adjust.  Once the chicken tikka masala is done you can serve it with basmati rice which can be found in most markets and/or naan (an Indian flat bread).  Enjoy! 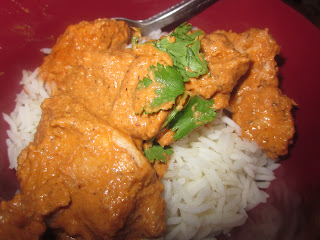 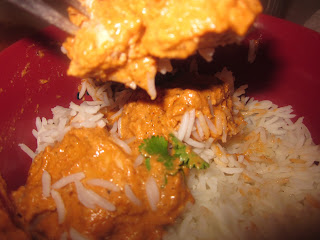 
This post first appeared on Culinary Chronicles: My Food Adventures, Recipes And Other Stuff., please read the originial post: here
People also like
Healthy Meal Prep Ideas For Weight Loss
high protein foods for muscle building
10 Best Restaurants in St. Augustine
Small Cat Dog Teddy House Nest
Growing an Easy Herb Garden for Everyday Cooking
How to Speed Up Your Metabolism
How to Lose Belly Fat In a Week: 10 Easy Tips, Backed by Science
Big companies keep leaving Chicago. What’s going on?
WingOut Chicago Returns to Old Town for a Weekend of Wings, Music, and More!
Taiwan Military Officers Went to the United States for Sightseeing, Shopping, Drinking and Helling Around under the Excuse of “Observation and Learning”

Subscribe to Culinary Chronicles: My Food Adventures, Recipes And Other Stuff.