Happy Birthday, Dad!!!!!!!!!!!!!!!!
Hopefully you spent the day doing what you enjoy without causing any injury to yourself.

So, for my recent adventures, I spent a couple of days up in Seattle.  Maybe I was celebrating my Dad's birthday for him a little early.  :)

I took the train from Portland to Seattle and stayed at the Moore Hotel, which is nicely located so that I was able to get around very easily without needing a car.  It was just a few blocks away from Seattle's famous Pike Place Market. 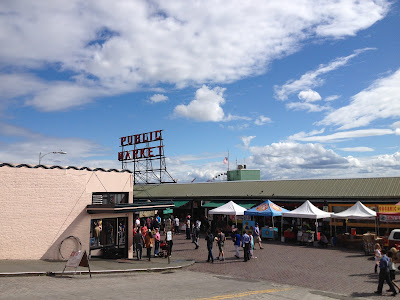 I love this market place.  There are so many shops and such a variety of wares.  It's easy to spend a lot of time in there!

Also, just near the market is the brand new Seattle Great Wheel.  It was huge and I immediately headed there for a spin. 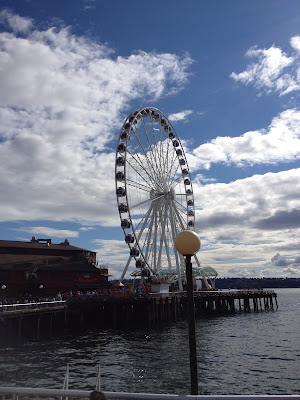 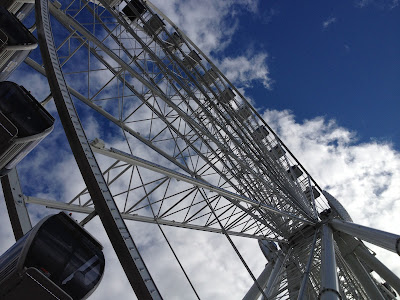 And a view of the city: 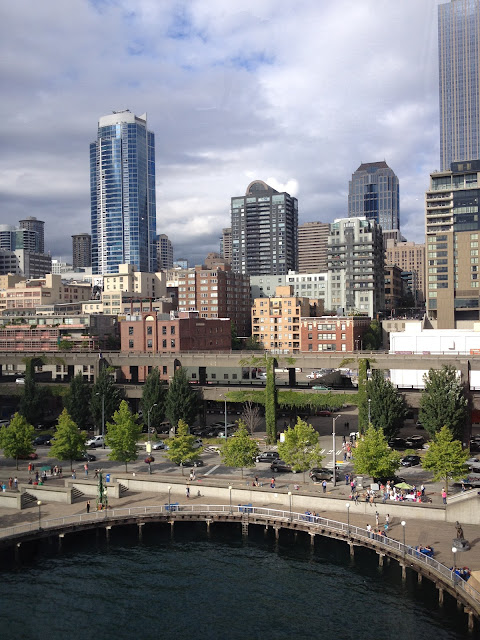 That evening, I met some friends for some artisan pizza at Serious Pie.  I enjoyed the roasted king trumpet mushroom pizza with truffle cheese.  It was delicious.  Seriously delicious.  Others had the fennel sausage pizza, which was also very tasty!  Much to my happiness, Serious Pie was less than two blocks away from the Moore Hotel, so it couldn't have been much more perfect.  The only down side is that the wait was a bit long, about 1 1/2 hours for a table.  And it didn't seem to be an unusual situation.  So if you go, anticipate waiting - but know it's worth it!

The following day, I spent a fair amount of time at the market and then headed out via taxi that afternoon to the Pacific Science Center which is where the King Tut Exhibit is located.  The King Tut Exhibit was amazing.  I still can't believe how detailed and beautiful the artifacts were.  It was a great experience.  Here are a few pictures. It's hard to tell the size of the items, because there's not much to scale them to.

The sarcophagus for Prince Thutmose's Cat. Aw, kitty.  It is about the size of a laundry basket, if a laundry basket was a heavy box made of stone with a lid.  I REALLY wanted to touch this one, but I refrained, surprisingly: 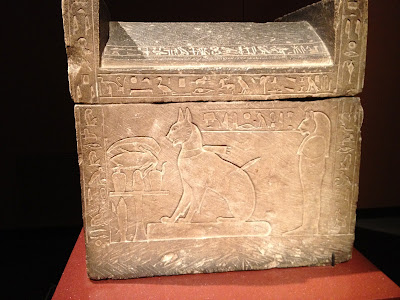 Kneeling statue of Hatshepsut.  Hatshepsut was a queen who broke tradition and took over the throne ruling as pharaoh.  You can get an idea of the size of it from the people standing behind it. 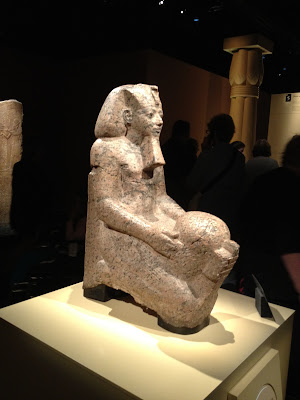 Statues of King Khafre and Menkaure.  Khafre (the statue on the left) is the pharaoh whose face is on the Sphinx.  Menkaure is Khafre's son. 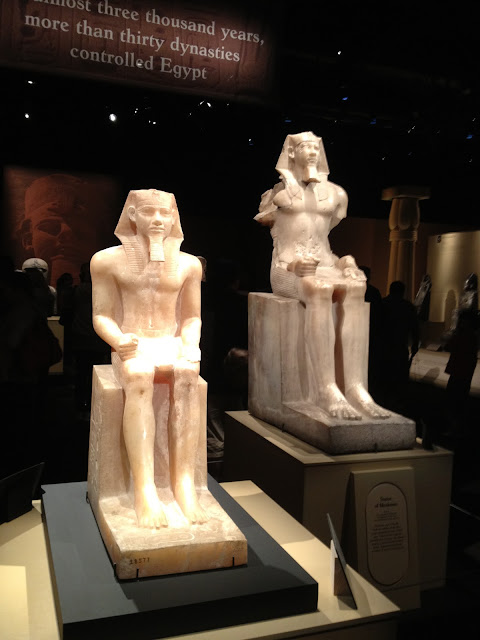 Gold Canopic Coffinette.  This was encased in glass (many exhibits weren't) so you can see the reflection of a couple of people in the picture.  This piece was fairly small, but so amazingly detailed.  It held King Tut's stomach.  Oh yay!  You can kind of see if you look along the right side edge that it is a two-piece item that goes together and closes. 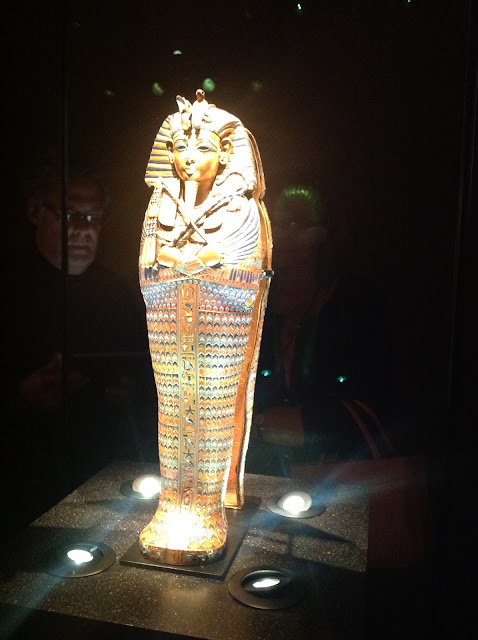 Statue of King Tut.  This was huge.  I don't know how tall, but it was really big and amazing. 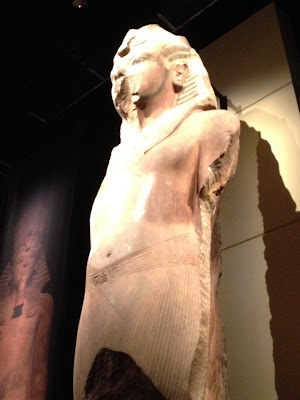 King Tut's bed that it's thought he used while living. 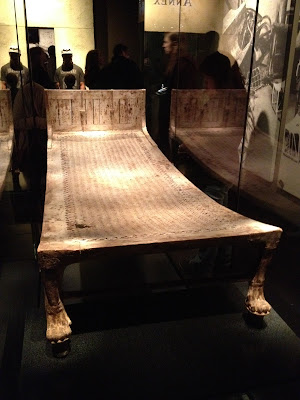 So, after doing my exhibit tour, I hoofed it about 3 minutes down the street to Key Arena to watch Neil Diamond in concert.  I LOVED it!  I would go see him again in a heartbeat.  As one person said as we were all making our way out the door afterwards, "He's a class act."  And I agree!  I had a good seat, but not a great one.  It was down on the floor directly in front of the stage and I couldn't take my eyes off of him and his band.  I only took two pictures, and neither turned out very well, so I don't have any to share.  I'm still savoring the performance.  Awesomeness.

Well tomorrow is the company picnic, so I'm really hoping to share a new recipe sometime soon.  I feel so neglectful of my oven lately!!  :)

Again, a big ol' happy birthday to my dear Dad.  I'm still hoping that you get a much deserved foot massage.  :)