Book Review: Jake Brigance Series (A Time to Kill, Sycamore Row and A Time for Mercy) by John Grisham 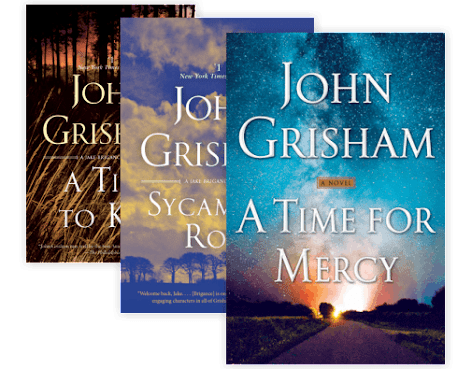 I hadn't read John Grisham in many years. Recently, I received a recommendation for the Jake Brigance Series by John Grisham which consisted of three novels - A Time to Kill (1989), Sycamore Row (2013) and A Time for Mercy (2020). I finished all three books in a span of 10 days which only happens when I willingly devote every single second of my spare time towards reading (always a good sign for the imminent review!). I was filled with nostalgia after reading Grisham after such a long spell. Although legal thrillers are not my most favourite category of fiction, I do enjoy reading them once in a while.
John Grisham is no stranger to bibliophiles. He was a practicing lawyer for over a decade but achieved worldwide recognition as an author. John Grisham carved out his own niche, writing a series of gripping legal thrillers. Having spent considerable time in the field of law, writing about courtrooms, juries and legal tussles come naturally to him and when he bases his stories on his native turf, the personal touches make them that much more appealing. It is no wonder he is considered one of the best thriller writers alive.
This series features main protagonist Jake Brigance a 'street lawyer' in the fictional town of Clanton in the equally fictional Ford County, Mississippi. All three novels are courtroom dramas and in-keeping with the time and location they are set in, tackle sensitive subjects like racism, segregation, sexism as well as bigotry, classism and domestic violence.
I've tried to keep this review free of any major spoilers!


This post first appeared on Meinblogland, please read the originial post: here
People also like
Meow Bar, Moscow
Have transaction data from all your sources joined in one place
Carpenter Ants in House
Cabbage Production Guide
Hindu Reincarnation Memory Club (HRMC)
“The Friend Who May Not Seem a Friend”: The Cat and the Fire, Part 1 of 3

Book Review: Jake Brigance Series (A Time to Kill, Sycamore Row and A Time for Mercy) by John Grisham