Tags: manwich
June 7th 2006
View original
Those that have skimmed and scanned the past 134 posts of this blog have figured one thing out about me: I have major food quirks. Majorly major. Somewhere between mayonnaise and tuna is that orange and red can o'shudder. Manwich.
Manwich is something we ate when all the other options were gone. After the salmon patties or macaroni and cheese with tuna and peas. There was always a can of Manwich and a pound of ground beef in the freezer. Sometimes we had buns, most of the time white bread. Spongy white bread soaking up Manwich juice. Tasty.
Imagine my shock, joy, repulsion, curiosity, desire, and every other emotion bottled into one big super feeling when I stumbled upon this booklet at a Goodwill. I say that like I tripped and a Manwich booklet just fell into my hands after breaking my fall. Anyway,  I was expecting gags and groans but instead I was surprised at how unremarkable 50 different ways to incorporate canned ketchup and ground beef could be. I did get a remarkable refresher on historic kitschy quotes and psychedelic 1979's illustration. 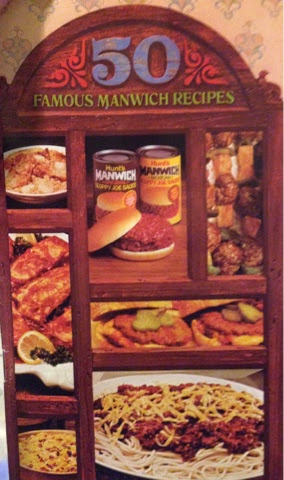 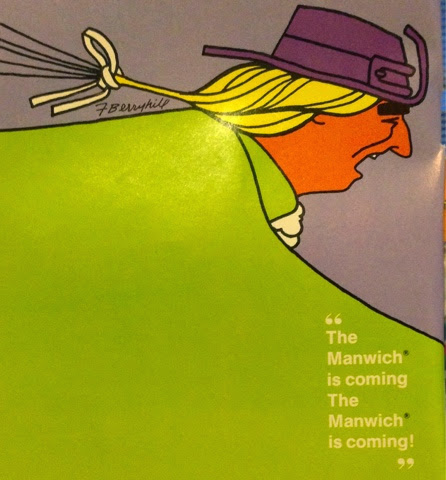 Heed the warning! Though I'm certain that isn't what Paul Revere said. Then again, maybe he did. History can and has been rewritten. He tried to warn us about Manwich. I just know he did. It feels like that could have happened. 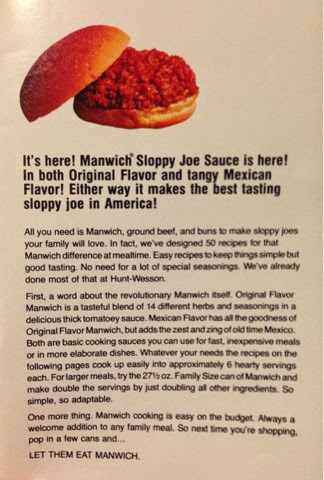 This is really putting on the ole dog. I'll have to dissect this as best as I can.
-I'm not too lazy or dumb to add a pinch of this and a dash of that. I would rather know what's going into my special sauce.
-There was Mexican Flavored Manwich? I just moved far, far away from Texas and ate a little Mexican food here and there. At no point did I ever think the food I ate tasted like Manwich.
-Manwich = broke food. 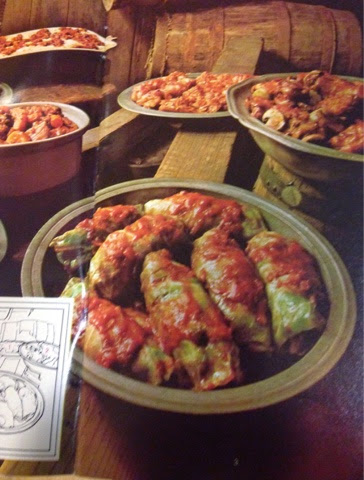 Manwich cabbage rolls. Chicken a la Jardiniere. Sweet and Sauerkraut franks. All made with Manwich. Some are reading this and salivating. Others are thinking I'm not entirely wrong in my feelings. 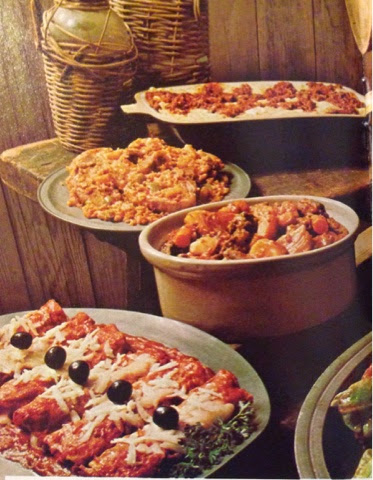 Enchiladas. Sauerbraten stew. Pork Chops Hawaiian. Beefy Lasagna. Who has time or desire to make Manwich into something other than Manwich? Someone with way more ingenuity than I will ever muster. 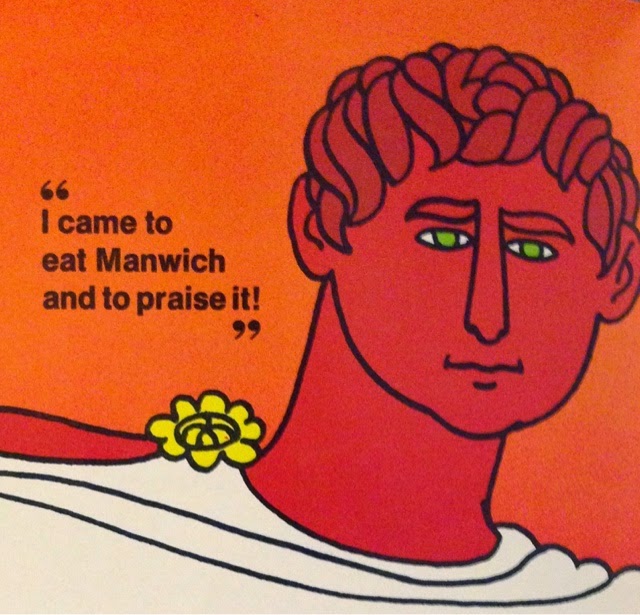 I think his nose looks like a limp penis. While he's praising the virtues of canned ketchup with 14 special spices, I'm looking at his nose. 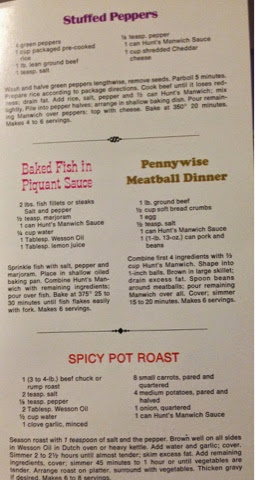 Here's some recipes just in case someone, somewhere has fish and Manwich and wondering how and if they could be cooked together. 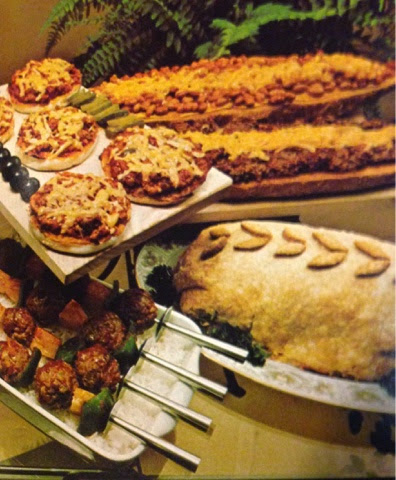 Having guests and wondering what to serve? No problem. Jolly Good Pizzas, M'm Kebobs, Help Yourself Sandwich, and an Upper Crust Beef Loaf should do the trick. Because, Manwich. 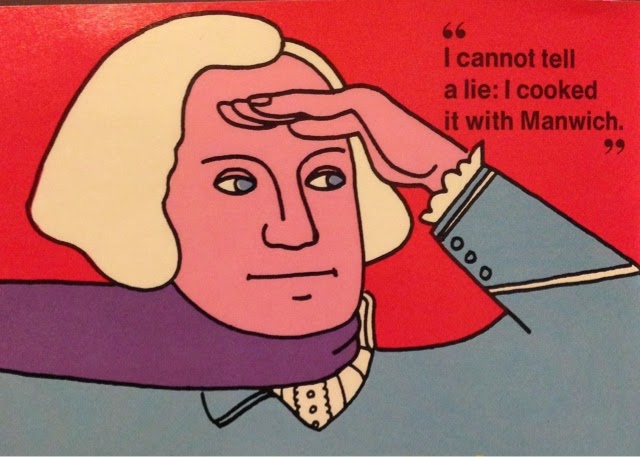 I could. Who wants to watch the sausage being made? This is like that semi homemade show that is or was on the Food Network. Sandra Lee would be all over this. 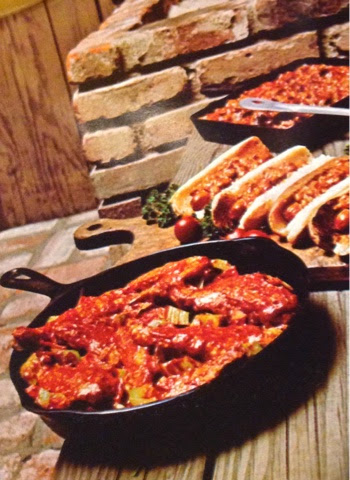 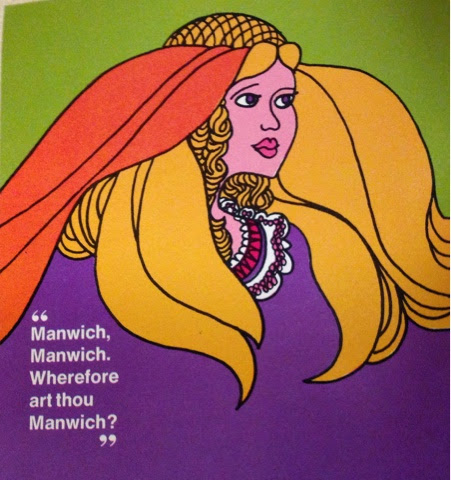 If I recall, her story did not end well. Maybe she should have chosen Manwich. 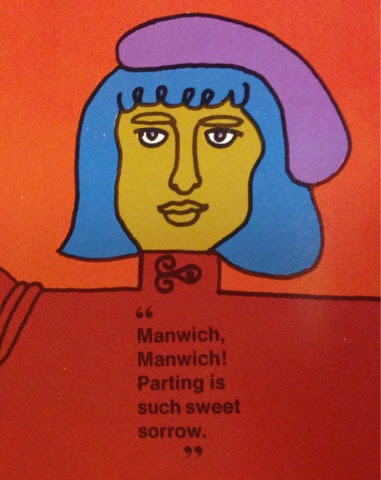 I just can't. The sheer stupidity of this is too much. Someone, maybe even the original owner of this book, thought this was funny. The green face, blue hair. And what looks to be a liver on his head. Hilarious. I will never hear these quotes again without thinking of Manwich. I need a sarcasm font. 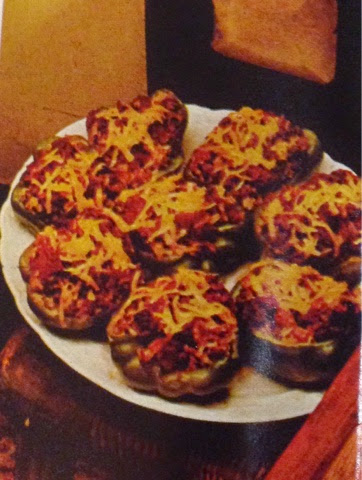 Manwich stuffed peppers. I bet that just stinks. I would need to burp my house after cooking these. By burp, I mean opening every window for no less than 72 hours. Who cares if it's winter in Connecticut. My pillows are not going to smell like green peppers and Manwich. 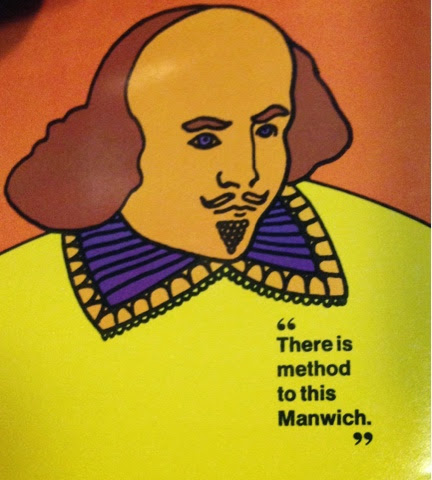 No. There's not a method to this Manwich and I really hate myself for repeating it. I had to process that saying to get it typed which means it went from eyes to brain to fingers. 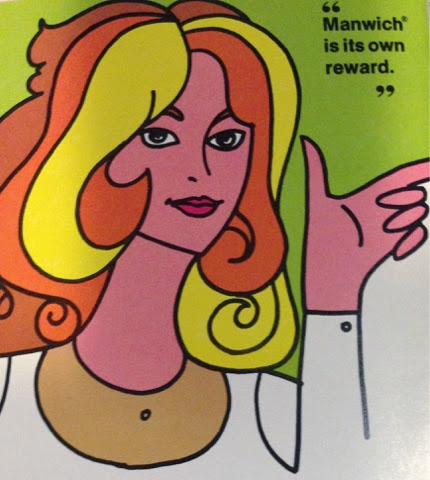 I'll take the penalty then. 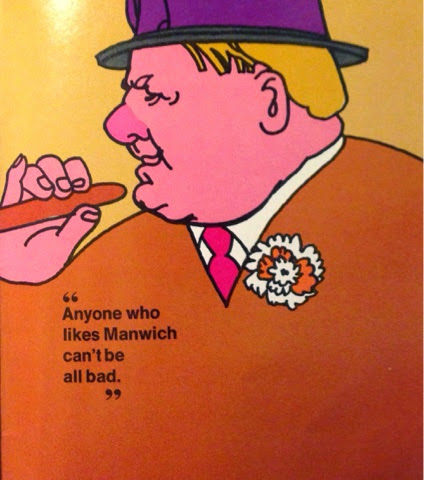 Simmer down. Nobody is that shallow. "Oooh I think you're an asshole because you like Manwich ," said no one ever. 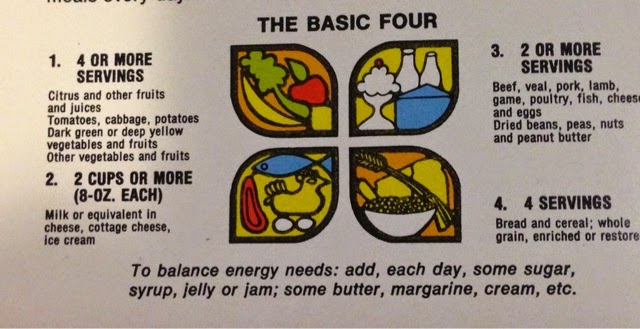 Add a can of Manwich to every meal! To balance energy add each day some sugar, syrup, jelly or jam, butter, margarine, cream, etc. After you take your heart and diabetes meds, winkety wink wink. 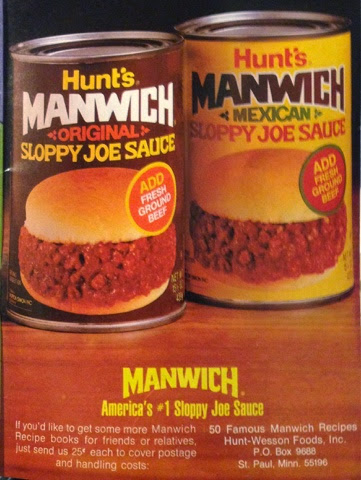 Manwich and its evil twin, Mexican Manwich.
I need to check and see if I have any Manwich. If I do, I have 50 ways to make it.