Without a doubt French Patisserie Fruit tart is among my most favorite desserts. Topped with copious amounts of fruit,  I’m being healthy, right?  As long as I ignore the Cream filling. 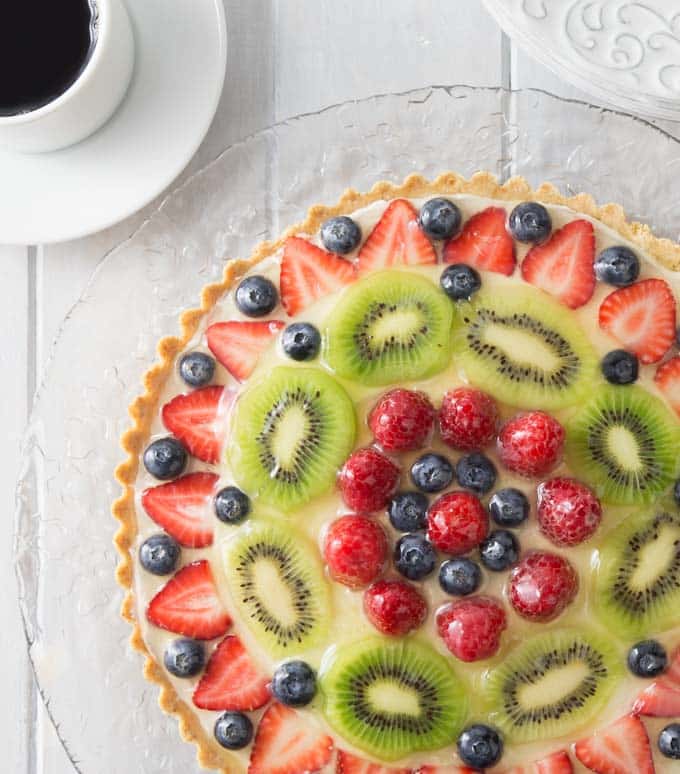 This dessert wows visually, but it’s not difficult to put together

Three parts: shortcrust, cream filling, and fruit topping. The glaze is optional and the first two items are make ahead.

My favorite grocery store in town started offering it about 10 years ago. The price kept going up to the point that I refused to buy it anymore. And thus, it became my mission to try to figure out the recipe. I finally did it. You basically prepare a vanilla cream made using cream cheese, heavy cream, sugar, and vanilla. That simple! It is not really a creme patisserie (thick pastry cream), but a much lighter one. 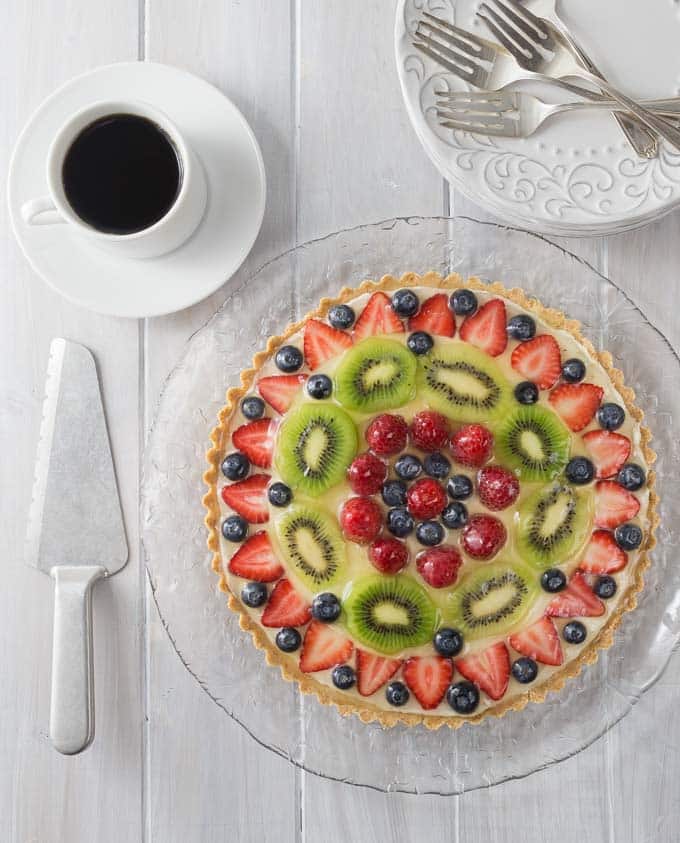 Let’s make a shortbread crust like a pro first – step by step:
Step 1: Place all the crust ingredients in a food processor.
Step 2: Pulse the food processor until the it starts to look like corn meal and is well combined.
Step 3: Pour the mixture into a 10 inch non-stick tart pan with a removable bottom

and push to the sides with a popsicle stick or chop stick. Make a thin layer in the middle and thicker on the sides.
Step 4: Press the middle of the mixture into the tart pan or you can use a flat bottom water glass. Press firmly to get a tight crust.
Step 5: Work the side up to the top edge of the tart pan and press tightly with your fingers.
Step 6: Bake in a 375 degree oven for 15 minutes or until golden brown around the edges. 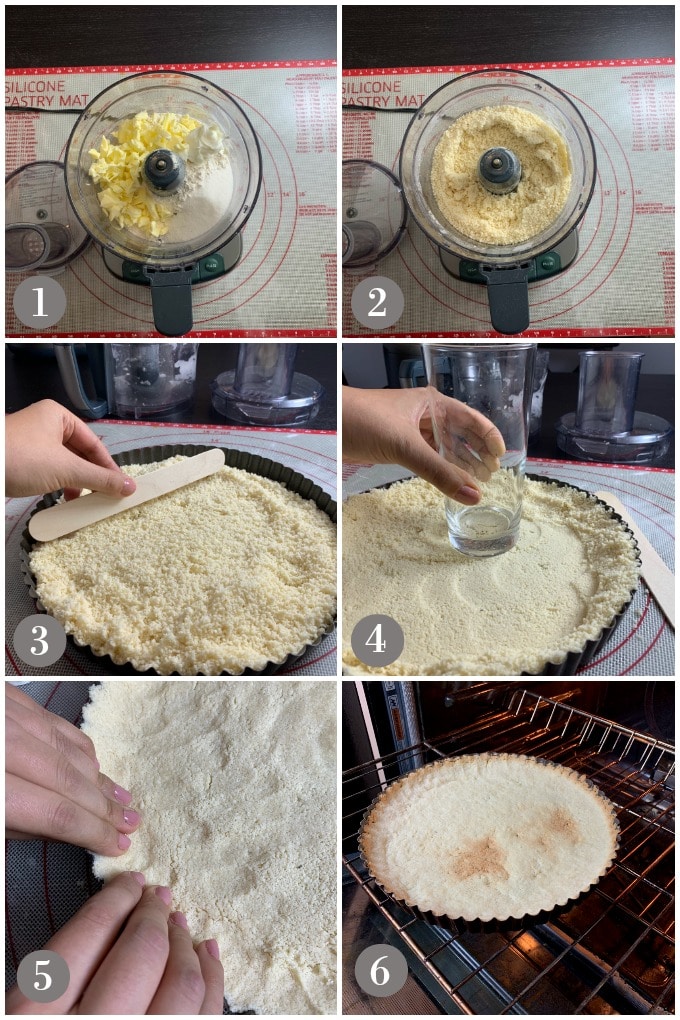 While the crust is baking I like to make the glaze so it can cool down before we assemble the tart.
Step 1: Combine the sugar and cornstarch on a bowl then heat the apple juice in a pan. Once it starts to simmer add the sugar cornstarch mixture.
Step 2: Whisk the mixture into the apple juice and bring to a boil and cook for two minutes until thick.
Step 3: Check the thickness with a spoon for nappe consistency or it coats the spoon. Once thick allow it to cool. 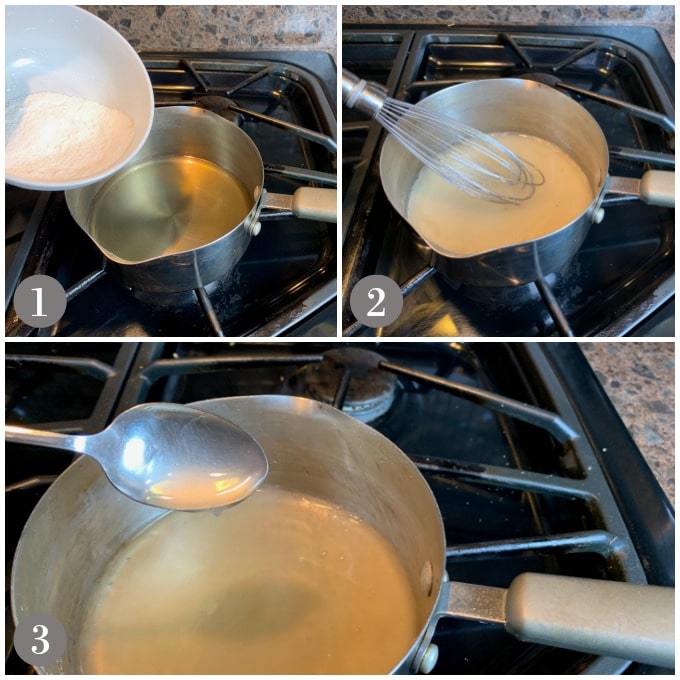 Now that the crust is done we can work on the cream filling and assemble the tart.
Step 1: Be sure the heavy cream, sour cream and cream cheese are all at room temperature. This will make a silky smooth vanilla cream filling. Add the heavy cream first to the mixing bowl and blend on medium speed for 2 minutes. I like to put the sour cream and cream cheese in a zip top bag, cut the corner and squeeze it into the cream a little at a time and keep mixing after you add it.
Step 2: Add the vanilla.
Step 3: Add the sugar.
Step 4: Pour the cream into a cooled tart shell.
Step 5: Make sure the cream is level and you can jiggle it a bit to get it level. At this point I like to put the tart into the refrigerator for 20 to 30 minutes until the cream is set.
Step 6: Arrange your sliced fruit around the cream.
Step 7: Add all your fruit slices and behold your masterpiece!
Step 8: Brush on the glaze over the fruit for a beautiful shiny finish. The glaze also keeps the fruit from looking dry if you store it in the refrigerator until it is time to serve. 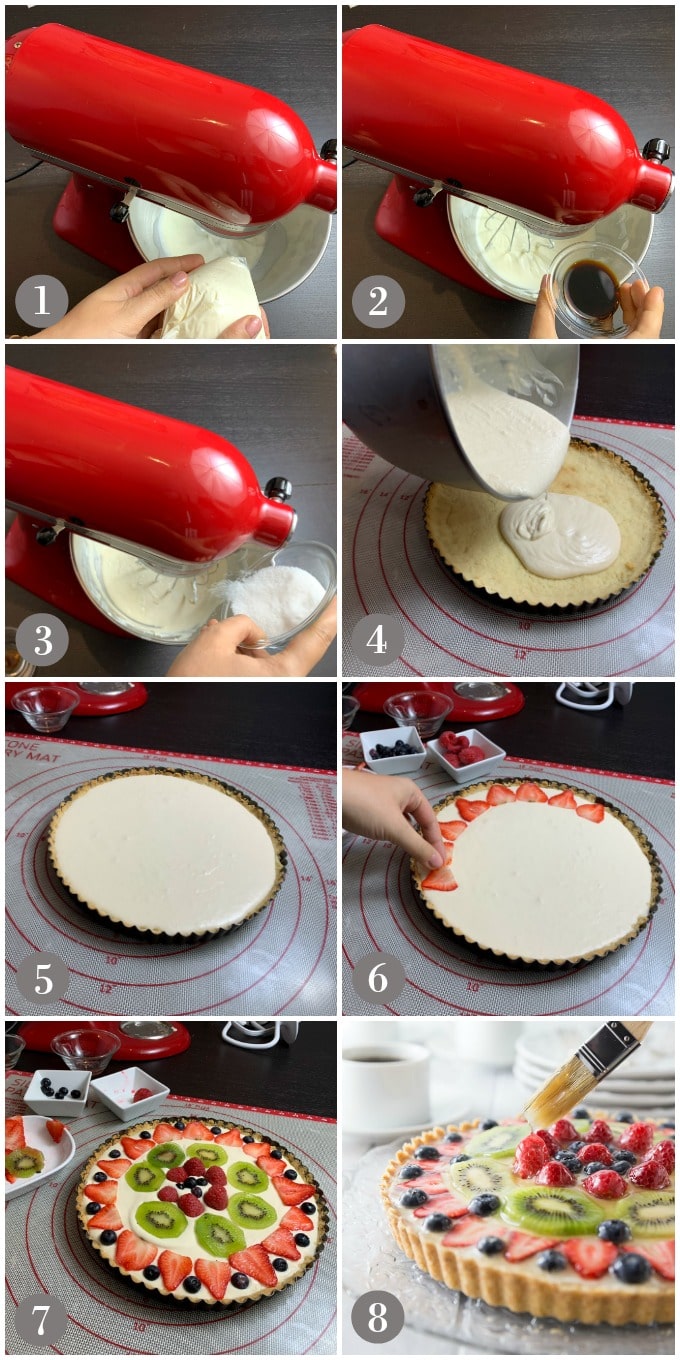 If you are interested in more traditional ethnic type desserts here are a few more to check out:
Polvorones de limón are a Spanish shortbread cookie with a hint of lime and dusted with powdered sugar.

Tusenbladstarta is a Swedish dessert that is like baking 6 big cookies and layering with custard cream, so good!

Lebkuchen is a German spice cookie that is typically made at Christmas time. 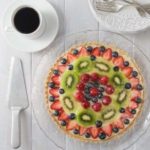 Here are some tips and tricks that I have found helpful in making a great fruit tart.  When I have combined the ingredients for the short crust I drop the crumbly meal right into the 10 inch tart pan and level it out with a chop stick or popsicle stick.  This gives me an even layer across the bottom and lets me build up the sides thicker. It reminds me of playing in a sandbox, or watching workers who are leveling fresh concrete with a long board.  Anyhow, I draw the stick across the bottom and deposit the extra meal around the sides.  I then take a flat bottomed water glass and gently tamp down the crust to pack it tight, and I usually work the edges with my fingers.  Be sure to pack it tight so it is not crumbly after baking.

The next tip is for the cream filling to have a really smooth consistency.  Be sure you let the cream cheese and sour cream come to room temperature before blending together.