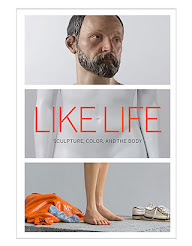 Like Life was a 2018 Sculpture exhibition at New York's Met Breuer Museum. Its catalogue of the same name not only illustrates many of the exhibits but also presents several analytical essays of a substantial and challenging nature. The catalogue is worthy of recognition in its own right and can be appreciated by anyone interested in art, even those who have not seen the exhibition. It presents a significant contribution to our appreciation of the three-dimensional art which we tend to label “sculpture” and its insights go significantly beyond what may be described as art criticism. The convoluted nature of this description will be understood by anyone who reads this book, because its approach is always to question the received values through which we interpret our experience of art. Indeed, these essays might even challenge our understanding of anything we might see through the lens of prejudice, assumption or merely interpretation. In short, everything. Like Life, the catalogue, thus becomes almost a disturbing experience. We know much more by the end, but only by realizing how little of ourselves and our perception that we actually understand.

Like Life is obviously a pun on life-like. It may also be read as a command, associated with liking life, which would be ironic, since the still life that these forms present is translated in many languages not as still, but dead. One of the threads that binds the discussion is that when sculpture becomes literally like life, it has generally been dismissed by critics as artefact, thus relegated and denied the label art. And at the heart of the discussion is the use of colour.

Modelled on a misplaced assumption that classical sculpture was expressed via a visual language derived from the unblemished whiteness of marble, the story of sculpture unfolded via this misunderstood desire to reproduce classical values through both purity of whiteness and fineness of finish. Like Life not only reminds us that these classical works were originally polychrome, it also asserts that this false set of values conveniently coincided with the European view that whiteness was always superior, and that anything coloured was, by inspection, inferior. Anything polychrome was thus firmly relegated to the ambit of the artisan, not the artist. And it was this assumption that for centuries effectively separated the worlds of sculpture and painting.

The original Met Breuer exhibition displayed sculpture from the later medieval era up to the present day, but non-chronologically. It juxtaposed items to illustrate themes, contrasts and contradictions in a thoroughly stimulating way. The catalogue of Like Life also does this, but the intellectual arguments within its texts are perhaps even more arresting than the visual punches the exhibition delivered.

Why is it that in painting, an attempt to render flesh flesh-coloured is normal even laudable,, whereas in sculpture it has for centuries been seen as devaluing the object? Why is it that we expect a sculptor to start with stone, wood or wax and work it into an image of their choice, rather than mould directly from the human form? Why do we still reject realism, when that realism depicts the everyday objects we normally do not associate with art? Why do expect idealised human forms, rather than real people, defects, foibles and all? Why is it that the sculpted naked human form still generally does not depict genitals? Why do we devalue sculpture that is modelled directly from life? What becomes clear quite early on in this journey through a history of sculpture is that the process it illustrates could be applied to any artistic form upon which we are willing to offer opinions. It could be painting, music, theatre, literature, poetry, etc. Upon what basis do we describe value or worth, upon what set of rules do we ascribe artistic value? And what controlling role do our presumptions play in editing what we see, or at least our interpretation of what we see? And, perhaps most important of all, if we are slaves to our presumptions, who or what generated them?

Functionality has always been a consideration. If an object is wholly divorced from use, then it has always been more likely, in our Western mode of thinking, that is, to be regarded as art. Mannequins in shopfronts, just like polychrome inflated cherubs decorating altarpieces, have always been seen as functional rather than artistic. A sculptor who chisels at a block of jasper to model a bust produces art, sometimes, whereas an undertaker who plaster-casts a death mask does not. But then, a death mask is not representing life, is it? It shows a form incapable of movement, after all. But then how can we see a still life as art, because that cannot move, can it?

Viewing the exhibition itself and certainly reading the catalogue can literally change the way a person looks at the world. A flea market that used to offer repeated tables of junk, now presents objects that have a reason to exist. What the observer must try to glean is why the maker of the object decided to represent that thing, in that way, in that material and in that colour. Like Life thus leads to complication. What previously was seen, and perhaps largely ignored, becomes objectified, separate, worthy of being looked at actively, rather than received in a passive, even dismissive way. Not many books have this kind of effect on their readers.

Like Life is as much a challenge as it is a presentation. Yes, we are presented with images of sculpture and asked to react. But the commentary often offers such a radically different approach from that which we may assume that it really does challenge us to reinterpret and re-evaluate our presumptions. It is what art is supposed to do, isn’t it?

How To Choose Best Baitcasting Reels?