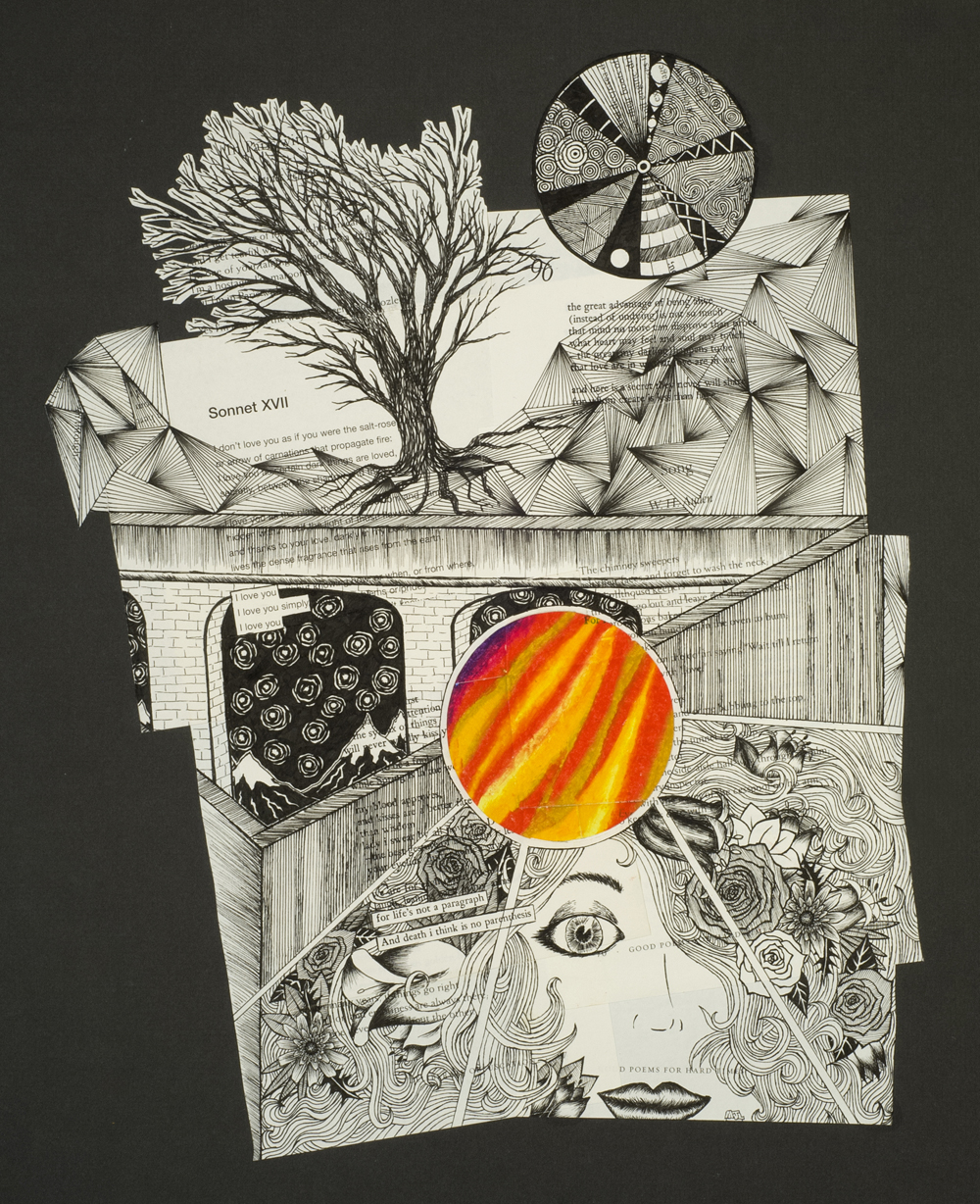 A TENNIS COURT
by Leesa Cross-Smith

Down there, they always peed outside. Hush-slipped their dress hems from their knees to their waists and squatted. Alabama girls. Alabama roses. What a pretty name: Alabama Rose, Leigh thought. The words swung down behind her eyes as she pulled her underwear back up where it belonged. Georgia Rose. That name was in the song they were just dancing to. The song playing in the reception tent. It was a song by one of those foreign boy bands, their mouths and faces, lemony and light. One of the boys had hair the color of the inside of an apple, all lit up and glowy. She liked the curly-haired one best because he looked like a little prince.

Michael looked like a little prince too. The girls walked back to the tent and saw him. The groom. The satin on the back of his suit vest looked like choppy waves of black water. He was dancing to another song now, something she'd never heard. The girls resembled an outrageous, drooping hydrangea bush standing there like that all bunched up together, smelling like sweet cocktails and fruit; they'd had peach cranberry lime strawberry cherry pineapple with ice and sticky lip glosses to match. Michael had a brother named Wolfgang and their parents had a tennis court because anytime you named your kid Wolfgang, the baby came with a tennis court. Wolfgang looked more like a Daniel or a John. Michael looked like the Wolfgang and because of it, the entire family was upside down. None of them made sense. The mother wore too much yellow, the father talked way too loud, the brothers didn't look enough alike and they also had a sister who was far too young, like she'd taken a crooked turn, wandered into the wrong family. But she was decent enough so they kept her, not knowing what else to do. They had so much money, nothing mattered anyway.

Michael and Jill were the newlyweds. Leigh and Jill worked together at the courthouse. Of course Jill had invited all of the courthouse girls and there they were, standing and sitting and drinking and eating and dancing when they weren't peeing. Alabama girls. Alabama Roses.

Wolfgang's syrupy brown eyes stuck to Leigh's and he asked her to dance. She said Okay and he said Not here, on the tennis court. She said Okay again and finished her champagne, motioned to the courthouse girls. They were supposed to keep an eye on one another. Fine. Done. Okay. She was keeping an eye on herself.

She followed Wolfgang's stalwart body. He'd been a college quarterback. Or maybe it was baseball. Leigh couldn't remember, didn't care. They were kissing on the dark tennis court, the smooth pleasant warmth of it heating up the backs of her thighs, her calves. She slipped off her shoes, little honey-colored heels covered in flowers. Everything was flowers. Mid-summer flowering in the South was an explosion. Bonanza!

“You didn't come with anyone?” he asked.

“I came with my girlfriends,” she said.

“I meant, a man,” he said, moderately annoyed. It made her like him more. It was a treat to be able to annoy a man so easily.

He kissed her earlobe, the milky pearl stuck in it.

“Do you play tennis?” she asked.

“You played in college?” she asked.

He nodded against her neck. It wasn't football. It wasn't baseball. It was tennis. She thought of her old crush on Pete Sampras, her current crush on Novak Djokovic—his wristbands, his responsible jawline, his celebratory fist. She'd always had an affinity for tennis players. Notoriously and gorgeously tall. Preppy and competitive. Alpha male.

“What's that bush called?” she asked him, pointing.

She pushed him away, gently. Like peeling off a sticker.

“I know those are gardenias,” she said, pointing to the other side where the creamy blooms spread lustily, almost inappropriately wide. Insolent. Forget Alabama Roses. Alabama Gardenias were her new heroes.

“Wow. You're something else,” Wolfgang said.

“Your name is Wolfgang,” Leigh said, laughing. The bubbly kind of champagne laugh that sneaks up on you. A bright poppy hiccup leapt from her mouth.

“You're drunk,” he said, rolling off of her. He sat with his hands clasped, his knees resting against the inside of his elbows. She liked it when a boy sat like that. A man, a boy, a dude, a guy.

“You look more like a John. Or a Michael. You should be Michael, Michael should be Wolfgang. Your family is kinda fucked up,” she said, laughing still, smoothing her hair. Her mouth tasted like his—hoppy beer and Italian cream cake.

“That one is called Abelia. The hummingbirds and butterflies like it a lot,” he said, pointing at a bush of white star-shaped flowers. “And Bottlebrush Buckeye,” he said nodding his head to the bushes beyond the fence. It was too dark to see but Leigh could feel the rough shrubby beasts slouch in the gloaming.

Leigh closed her eyes and pictured every flower every bush every vine every tree every root every green or brown or white or yellow or red or pink or purple or orange thing snapping and whipping loose and wrapping itself around her, around both of them, suffocating them as they gave their ghosts to the petal-scents and thorns. It's not that she wanted to die but sometimes she would think can't we just get it over with? It, meaning everything. Everything happening all of the time. She could invent a new cocktail and call it This Exhausting Life.

The moon—full, new, or waxing crescent

Just, stop
The wedding DJ was repeating songs now. Back to Van Morrison. She could hear the bass, the occasional birdlike drunken whoop. She didn't miss the courthouse girls. She and Jill weren't that close. She hated weddings. Ceremonies, in general. And don't get her started on funerals.

“I think I saw Winged Sumac back there where I went to pee,” Leigh said.

“Yep there's a bunch back there,” he said, nodding.

Nope. No, she didn't come with a man. She wondered if he came with someone. She remembered seeing him with a woman, but maybe she was making that up. Everything before was on the other side of the champagne curtain. She brazenly lifted one of her arms to smell underneath. It still smelled like her flowery deodorant. Calendula. Even in this humidity, even in this heat. Wolfgang was on this side of the curtain and he was looking at her, smiling. Surprisingly agog. He knew the names of the bushes. Irresistible—a boy knowing the names of the bushes. He was delightfully half-annoying, half-cute. Thorny enough. Outstanding. A boy called Wolfgang, a boy on a tennis court.

Leesa Cross-Smith is the author of Every Kiss A War (Mojave River Press) and the editor of WhiskeyPaper. She had her first story (ever!) published in Storychord in 2011. Her writing can be found in The Best Small Fictions 2015 and lots of literary magazines. She lives in Kentucky and loves baseball and musicals. Find more at LeesaCrossSmith.com.

Marissa Levien is an artist and writer living in Queens. Her work has been published in Pure Coincidence Magazine, Sundog Lit, Penny Dreadful, Literary Manhattan, and the Toast. He artwork has also been displayed at the Domenican Cultural Center in New York, the Local Project in Queens, and was shown as part of the summer series of the Dyfunctional Collective on Governor's Island, an exhibition which she also curated. On weekdays one can find her working as a gallerist for Cavin-Morris Gallery in Chelsea, and on weekends one can find her sipping whiskey and talking literature as a guide on New York's Literary Pub Crawl Tour. See more of her work at marissalevien.com.

Steady Holiday is Dre Babinski. Until now, you could find her playing in bands around Los Angeles, making a record with some friends from Dr. Dog and opening for big-tent stuff like Fitz and the Tantrums and Fun dot. She enjoyed the sideman life, but longed for an outlet of her own, writing and recording in secret, developing a body of work about hidden desire itself. Steady Holiday is her coming out party. For more, visit steadyholiday.com.

Simple Tips To Increase Self-Esteem
87 Ideas to Start a Side Hustle Busin…
Where To Stay In Amsterdam 2020 {Best…
American Tourister Moonlight Luggage …
OPINION - Shields and Brooks 9/6/2019
Every other Monday, Storychord features one story + one image + a one-song soundtrack -- each by a different, underexposed artist -- for a collaborative, multi-media storytelling experience. Want your work featured in an upcoming collaboration? Submit: http://storychord.blogspot.com/2010/02/about-storychord-submission-guidelines.html