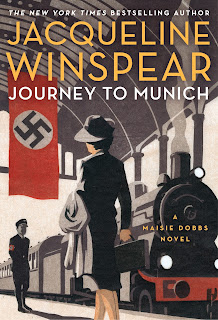 The first Maisie Dobbs crime-solving mystery launched the former war nurse in her own private investigation business, in 1929 -- in the postwar desperation of bombed-out London and the grim almost-defeated mood of England as a whole. A trained psychologist with strong ties to her mystically inclined and very wise mentor, Maisie steps out of the noted English class system (shh! she was once a servant!!!) into a role connected with both the police and the upper classes.

In JOURNEY TO MUNICH, the 12th in the popular and highly readable series, it's 1938, nine years further away from the war that still haunts Maisie Dobbs. She's already had hints in the meantime that her home country suspects that war with Germany will be inevitable. Now the British government and the American Secret Service collude to send her into enemy territory: the city of Munich, where two missions at once call for her skills—one as agreed with the government, and the other a personal act on behalf of desperate parents.

Jacqueline Winspear sets up the plot to accomplish far more than letting readers apply their hindsight to the growing evil of the Nazi forces. Maisie's official task is to pretend she's the daughter of a British scientist who's been imprisoned in the Dachau concentration camp, on the outskirts of the good-time city of Munich. As usual, she exceeds the assignment and delves deeply into the local resistance (portrayed in gritty and heart-pounding detail) in order to rescue this man.

Meanwhile, her effort to persuade a young woman of Canadian parents -- a grown daughter in the family that she blames for her own husband's death! -- increases Maisie's own likelihood of being fingered as a spy and captured, herself. And what game is the American agent playing in the midst of all these risks?

Winspear's readers can expect a top-notch page-turner as this skillful author draws Maisie closer to the very type of wartime conditions that still haunt her from two decades earlier. And although we can't have Maisie's intriguing mentor Maurice Blanche return to us, JOURNEY TO MUNICH demands so much from her that Maisie renews her commitment to Maurice's process of both investigating and protecting her inner integrity and calm. Best to read the other volumes first, to get the most from this one.

We who frame these books in our existing history know that the pace of the series is going to take Maisie into the Second World War, and the tension of that awareness ramps up the stakes in this volume. It's an excellent read, tightly paced, humanely inquisitive, and much deeper than the average page-turner.

If you are reading James Benn or Charles Todd, be sure to keep up with Jacqueline Winspear's Maisie Dobbs series -- for a very different and worthwhile face of British mystery in the fiery glow of the past century's most significant wars.

Defining the problem of Sexism & Harassment