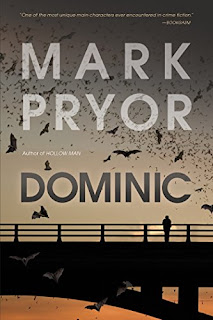 Mark Pryor is British by birth and bucked the author trend by moving to Austin, Texas, to become an assistant district attorney. His Hugo Marston series, apparently now on long pause, is set in Europe and delves into human love and loyalties, with a whiff of the paranormal that evil can call forth.

I found his stand-alone crime novel Hollow Man to be interesting -- it's in the Dexter line, and also similar to Garry Disher's Wyatt series, as the protagonist is a psychopath. Unlike Disher's Wyatt, however, Pryor's charming criminal Dominic -- himself an Englishman and prosecutor -- shows no inner sense of longing for an emotional life. Love leaves him cold ... well, not physically, but he won't be making any genuine self-sacrifice for the lady who attracts him. And again unlike the Marston series, this one is set in Texas. Dark, dark Texas.

Pryor then created a sequel after all, which was released last week: DOMINIC. This time, to add to the puzzle of Dominic's criminality and manipulations, there's a lady of interest involved who is nearly as chilly-hearted as the psychopath protagonist ... a lady in a lime green dress that shows off all her physical allure. Is it her beauty, or her own manipulative psyche, that attracts Dominic?

Making the book yet more challenging is Pryor's device of alternating voices between these two dangerous personas. And each time he does so, it's up the reader to catch up, because on the page each one speaks as "I." So it pays to note the character name at the opening of each numbered chapter.

Although the manipulations and interrupted interior monologues are compelling and even haunting, they are also deeply disturbing. I do hope there aren't many people like Dominic in the real world. I came away from the book reluctant to face another in this series, and hope that it's not the career of dealing with American courtrooms that is pulling this kind of writing from the author!

If you're a Wyatt or Dexter fan, or a reader of Dave Zeltserman, you need Hollow Man and DOMINIC on your shelf, for comparison and to better grasp the choices of these noir crime-fiction creations. Do expect to get up and check that the double locks are in place on the doors, and that all your other means of self-protection are ready and close at hand. Published by Seventh Street Books, where crime fiction thrives.