Release Blast w/Giveaway: Love Between the Covers: A Documentary Film by Laurie Kahn 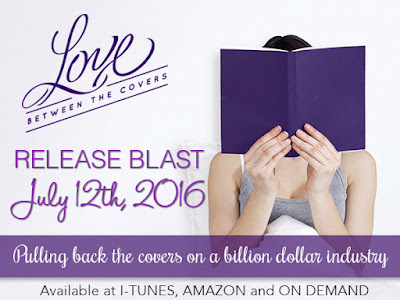 Love Between the Covers
A Documentary Film
Written, Produced & Directed by: Laurie Kahn
Releasing July 12th, 2016
Distributed by: The Orchard

Have you ever made love in front of o…
The Queens of Pop: In The Mix
Home Workouts for Weight Loss
Creating and Selling Digital Products
Telegram Marketing solutions
Love Between the Covers is the fascinating story of the vast, funny, and savvy female community that has built a powerhouse industry sharing love stories.  Romance fiction is sold in 34 languages on six continents, and the genre grosses more than a billion dollars a year -- outselling mystery, sci-fi, and fantasy combined.  Yet the millions of voracious women (and sometimes men) who read, write, and love romance novels have remained oddly invisible. Until now.
For three years, we follow the lives of five very diverse published romance authors and one unpublished newbie as they build their businesses, find and lose loved ones, cope with a tsunami of change in publishing, and earn a living doing what they love—while empowering others to do the same. Romance authors have built a fandom unlike all others, a global sisterhood where authors know their readers personally and help them become writers themselves. During the three years we’ve been shooting Love Between the Covers, we have witnessed the biggest power shift that has taken place in the publishing industry over the last 200 years. And it’s the romance authors who are on the front lines, pioneering new ways to survive and build communities in this rapidly changing environment.
Watch Now
iTunes Movies | Amazon
The Official Trailer

Love Between the Covers - Official Trailer from Laurie Kahn on Vimeo.

Project History – Love Between the Covers
By Laurie Kahn, Director
Romance is the behemoth of the publishing industry; it outsells mystery, sci-fi, and fantasy combined. Yet no filmmaker has ever taken an honest look at the amazing global community that romance writers and readers have built.
As a documentary filmmaker, I want to bring the lives and work of compelling women to the screen, because any industry dominated by women is typically dismissed as trivial and “merely domestic.” My previous films -- A Midwife’s Tale and Tupperware! – are very different from one another, but they were both shaped by my desire to look honestly at communities of women who haven’t been taken seriously (but should be), who deserve to be heard without being mocked.
I knew very little about the romance community when I decided to make this film. But the further I got into this subject, the more convinced I became that the romance community is not only an interesting sisterhood including more than 100 million women around the globe, but also a phenomenon to learn from.
No filmmaker has ever had the access we’ve had. We have been allowed to film behind-the-scenes strategy and editorial meetings at publishing houses; we’ve been included in the private lives of our main characters; we’ve captured public and private moments at conferences where thousands of romance readers and romance writers are gathered; we’ve been invited to shoot on trips with authors and their fans in South Carolina, Alaska, and Texas; we’ve been allowed to film both high-end and low-budget romance cover shoots; and we’ve been granted an unusually intimate interview with superstar Nora Roberts.
Love Between the Covers is one part of a larger effort called the Popular Romance Project that I dreamt up five years ago. To pull off this huge project, I found fabulous partners: The Library of Congress Center for the Book, the Roy Rosenzweig Center for History and New Media, and the International Association for the Study of Popular Romance (IASPR). They’ve all been a pleasure to work with!
The Popular Romance Project explores the fascinating, often contradictory origins and influences of popular romance as told in novels, films, comics, advice books, songs, and internet fan fiction, taking a global perspective—while looking back across time as far as the ancient Greeks.
In addition to the film the Popular Romance Project includes:
PopularRomanceProject.org – the interactive, content-rich website launched in 2011 by the Roy Rosenzweig Center for History and New Media. The site allows its users to see romance novels in a broad context across time and place—with a huge archive of Love Between the Covers interview excerpts, teaching resources, and blogs by romance authors, scholars and industry insiders.
What Is Love? Romance Fiction in the Digital Age – an international, multimedia conference of scholars, writers, and readers, hosted by The Library of Congress Center for the Book, funded by Harlequin and the Nora Roberts Foundation. The conference took place on February 11, 2015 at the Library of Congress -- open to the public and free. It was an exciting, stimulating day for all who were there, and videos of the panels will be available at the Library of Congress website.
Our advisory board and colleagues at IASPR have been there to help us every step of the way. IASPR’s current president, Pamela Regis, was the co-chair of the conference at the Library of Congress.
Many institutions and individuals have supported this project: the National Endowment for the Humanities, Mass Humanities, the Nora Roberts Foundation, Romance Writers of America, Amazon.com, Harlequin Enterprises, the Tavris Fund at Brandeis University, our amazing supporters at Kickstarter, and those who’ve donated through our website, lovebetweenthecovers.com.

Director/Producer LAURIE KAHN’s films have won major awards, been shown on PBS primetime, broadcast around the world, and used widely in university classrooms and community groups. Her first film, A Midwife’s Tale, was based on the 18th century diary of midwife Martha Ballard and Laurel Ulrich’s Pulitzer Prize-winning book A Midwife’s Tale. It won film festival awards and a national Emmy for Outstanding Non-Fiction. Her film TUPPERWARE! was broadcast in more than 20 countries, won the George Foster Peabody Award and was nominated for a national Best Nonfiction Director Emmy. Kahn previously worked on Eyes on the Prize: America’s Civil Rights Years, The American Experience, FRONTLINE’S Crisis in Central America, All Things Considered, and Time Out. She’s a resident scholar at Brandeis’s Women’s Studies Research Center.
For more information on the film, http://www.lovebetweenthecovers.com/
Website | Facebook | Twitter | YouTube


This post first appeared on EskieMama Reads, please read the originial post: here
People also like
Have you ever made love in front of other people?
The Queens of Pop: In The Mix
Home Workouts for Weight Loss
Creating and Selling Digital Products
Telegram Marketing solutions
What You Need to Know About Sydney Epoxy Flooring
First Night of the Seven (7) Nights of Christmas and Carols COGOP SVG

Release Blast w/Giveaway: Love Between the Covers: A Documentary Film by Laurie Kahn