Remnants
by Carolyn Arnold
GENRE: Mystery
~~~~~~~~~~~~~
Carolyn Arnold will be awarding a paperback copy of Violated by Carolyn Arnold to a randomly drawn winner via rafflecopter during the tour. Please visit GoddessFish.com to follow the tour, remember the more you comment better your chances on winning. 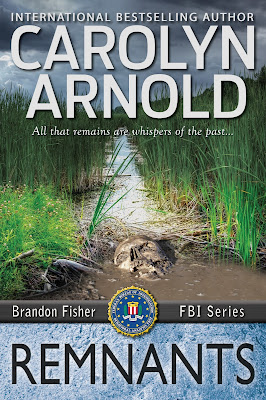 BLURB:
FBI agent and profiler Brandon Fisher and his team are called to Savannah, Georgia, when body parts belonging to three separate victims are recovered from the Little Ogeechee River. As the case takes one dark turn after another, Brandon finds himself embroiled in a creepy psychological nightmare.
~~~~~~~~~~~~~
Excerpt Two:
My senses were busy taking in the Crime scene: marshland, relative seclusion, an arm and leg discovered last week, an arm yesterday. Aside from the human remains that had been found here, the property had a serene feeling to it, a sense of peace. There was a tangible quality to the air, though—or maybe it was the presence of law enforcement and crime scene investigators—that made it impossible to deny that death had touched the place.
“What else can you tell us about the limbs that were recovered?” Paige asked.
The lieutenant cleared his throat. “Well, both arms didn’t have hands, and the leg didn’t have a foot. We found incision marks indicating the hands and foot had been intentionally cut off.”
“Our killer could have taken them for trophies or to make identification impossible,” I suggested.
Pike gave a small nod and continued. “And while we know the hands and foot were removed, it’s not as clear how the appendages separated from the torso. It would be something we’d need the medical examiner to clarify.”
Jack’s brow furrowed, and I could tell his mind was racing through the possibilities.
“But,” Pike continued, “all the limbs have one thing in common: muscle tissue remained, even though the skin had been removed.”
“It is possible that the skin was also taken as a trophy,” Zach speculated.
“We could be looking for a hunter or a sexual sadist,” Jack said.
Hunters were typically identified by the type of weapon they used—a hunting knife, rifle, or crossbow, for example—and they tended to dispose of their victims’ bodies in remote, isolated areas. A sexual sadist, on the other hand, got off on the torture and pain. But we’d need to gather more facts before we could build any sort of profile on our unsub. Even knowing more about the victims themselves would help. Was the killer choosing people he or she was acquainted with? Were the victims of a certain gender, age group, occupation? The list went on and on. From there, we could more easily speculate on our killer’s motive and what they had to gain.
~~~~~~~~~~~~~
Five Steps to Profiling a Serial Killer

BY CAROLYN ARNOLD
He’s five seven, in his thirties, walks with a limp, works in temporary placements, and is single. He targets women because he was abused by his single mother, who slept around with men while he was growing up.
If you’re a fan of serial-killer fiction, whether it be on TV or in books, you are probably left shaking your head sometimes when the FBI sees some crime scene photos and immediately has a profile of the killer. What are they, psychic?
As it turns out, profiling is actually a science, though not an exact one. In fact, many profiles prove to have been wrong once the unsub is caught. So why bother profiling at all? Well, even if some facts are off, profiling establishes a foundation from which investigators can begin their search for—and hopefully catch!—the killer.

So what do investigators consider when building a profile?
1. Investigators focus on the crime itself. What do the crime scene photos show? What are the autopsy findings? Are there any witnesses, and if so, what are they saying? What have police officers noted in their reports?
2. Investigators visit the crime scene. They use their six senses—sight, sound, taste, smell, touch, and intuition—and make a record of their reactions. They analyze where the body was found, whether the murder was committed in the same location that the body was found or the body was dumped. They question any and all aspects of the location and what it might tell them about the killer and/or the killer’s victim selection, aka victimology.
3. Investigators look for a signature or method of operation (MO). Don’t confuse these two terms, though, as they are not the same thing. Every crime has a MO, which is how the murder was carried out, but a signature is not present in all cases. A signature only exists when a killer chooses to leave behind a personal mark.
4. Investigators consider what kind of unsub might commit the crime at hand. For example, are they organized or disorganized? Are they a hunter or a sexual sadist? Is gender, age, or religion relevant? Is there is a geographical element to the crimes?
5. Investigators take a closer look at the victims. They factor in similarities and determine whether the victims are low-, medium-, or high-risk people. Can any of the victims be connected to one or more person or place? How were the victims approached? Is there evidence of resistance, or is it possible the victims knew their killer?
Sometimes the answers to all these questions can be harder to piece together than others. In my most recent novel, Remnants, Brandon Fisher and his FBI team struggle to build a profile on the killer they’re hunting, as the identities of the victims are unknown and aspects of the MO vary among the murders. But when a torso painted blue and missing its heart is found—something they haven’t seen in any of the previous deaths—the case takes a dark turn that begins to provide them with some new leads. As the story unfolds, the FBI is drawn deeper and deeper into a creepy psychological nightmare. One thing is clear, though, even if they don’t have all the facts yet: The killing isn’t going to stop until they figure it all out. And they are running out of time…
I invite you to read Remnants and profile alongside the FBI to stop a serial killer in Savannah, Georgia.
Remnants is available in e-book, paperback, and hardcover formats from popular retailers, including the following:
Amazon
Barnes & Noble
Apple iBooks
Kobo
Google
About the Brandon Fisher FBI series:
Profilers. Serial killers. The hunt is on. Do serial killers and the FBI fascinate you? Do you like getting inside the minds of killers, love being creeped out, sleeping with your eyes open, and feeling like you’re involved in murder investigations? Then join FBI agent and profiler Brandon Fisher and his team with the Behavioral Analysis Unit in their hunt for serial killers.
This is the perfect book series for fans of Criminal Minds, NCIS, Silence of the Lambs, Seven, Dexter, Luther, and True Crime.
Read in any order or follow the series from the beginning: Eleven, Silent Graves, The Defenseless, Blue Baby, Violated, Remnants.
~~~~~~~~~~~~~ 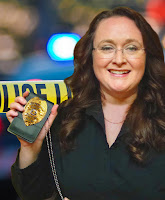 AUTHOR Bio and Links:
CAROLYN ARNOLD is an international best-selling and award-winning author, as well as a speaker, teacher, and inspirational mentor. She has four continuing fiction series—Detective Madison Knight, Brandon Fisher FBI, McKinley Mysteries, and Matthew Connor Adventures—and has written nearly thirty books. Her genre diversity offers her readers everything from cozy to hard-boiled mysteries, and thrillers to action adventures.
Both her female detective and FBI profiler series have been praised by those in law enforcement as being accurate and entertaining, leading her to adopt the trademark: POLICE PROCEDURALS RESPECTED BY LAW ENFORCEMENT™.
Carolyn was born in a small town and enjoys spending time outdoors, but she also loves the lights of a big city. Grounded by her roots and lifted by her dreams, her overactive imagination insists that she tell her stories. Her intention is to touch the hearts of millions with her books, to entertain, inspire, and empower.
She currently lives just west of Toronto with her husband and beagle and is a member of Crime Writers of Canada.
Social Links:
Website Facebook Twitter Newsletter


This post first appeared on EskieMama Reads, please read the originial post: here
People also like
18+ Adult Movies Of All Time To Fulfill All Your Sexual Fantasies| Lolita, Exotica and More
5 Tips For Protecting Your Cryptocurrency Investments
Music Profile: Crissi Cochrane - Soul Singer Songwriter - Ontario, Canada | SRL Networks London Music PR
Istanbul: a virtual tour through books, film, food and music
Top Ten Feats of Small Business Owner Superheroes!
Putting Scammers on Scan on Twitter
How to Tell if a Hospital’s Culture is a Good Fit for You
How to Get a Girl to Have Sex With You: 5 Tips