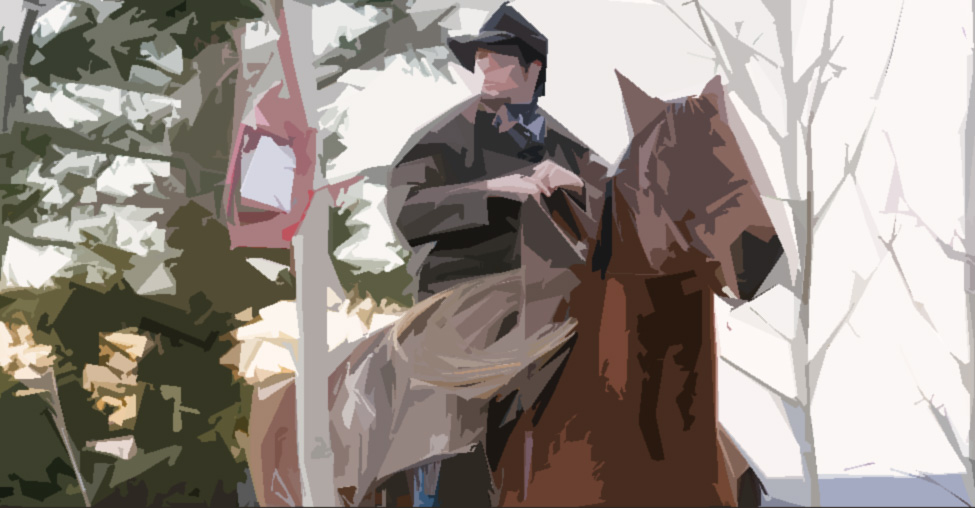 It was all flat prairie with just a single ridge, and two grizzled prospectors, Tex and Colorado, climbing the ridge on opposite sides and unaware of one another, met unexpectedly at the top.

“Any luck?” Tex said. He was heading toward the mountains; Colorado was going the other way.

“I do say,” Colorado said, and touching the brim of his hat, he moved on.

Two months later, Tex was ensconced in a luxury suite, the entire top floor of the Nevada Hotel. He was in the bathtub, sipping champagne while his new gal, the beautiful, conniving Lola, kneeling alongside the tub, sponged his chest and back.

“Got you, you mangy thievin’ varmit,” he said.

“Before’n you does something,” Tex said, “taste this scintillating alcamahal.”

“I am powerful thirsty,” Colorado admitted.

He accepted a long-stemmed glass from Lola.

Colorado sat; Lola jerked suddenly on a velvet sash and the floor opened beneath Colorado and he plunged three floors, down a chute and into a coal bin. By the time he extricated himself, the plush stagecoach carrying Tex and Lola was hightailing out of town.

Two months later, Tex and Lola were riding in a private railroad car, steaming toward San Francisco. Tex was sitting on a walnut throne-chair, smoking a ten-dollar cigar. Lola, wearing a frilly, red-velvet gown fringed with black and with generous cleavage showing, was clipping Tex’s whiskers. The car door opened and in stepped Colorado, gun pointed.

Lola pulled on a sash and the powerful spring in the floor beneath Colorado’s feet exploded and Colorado was ejected, crashing through the skylight and hurtling a hundred feet into the air, arms and legs flailing, and coming down on a prickly saguaro.

“They never do,” Lola said. She pulled again on the sash and Tex went up through the skylight and into the air and he landed on a cactus too. He extricated himself, painfully, and after pulling the stingers out of his behind, he walked over to the tracks. The train was chugging away and Colorado was there.

“I knowed your danged gold would bring me nothing but trouble,” Tex said.

“You going after her?” Colorado said.

“I reckon I’ll head for the hills,” Tex said. “Say, I’ve got just enough money in my billfold for a grubsteak for the three of us.”

“Me and you,” Tex said, winking and grinning, “and Lola, soon as she plunks down on the fancy toilet I had put in special for her,” and jerking his arm up and down, as if he were yanking a sash, “and concludes her business.”

This story was written by Hugh Centerville. Hugh is an author at Centerville Books and blogs with his siblings at Hugh Centerville's Blog. His shorter stuff has, or will appear shortly, in Hello Horror, Stinkwaves, and Another Realm.


This post first appeared on Funny In Five Hundred, please read the originial post: here
People also like
Video Premiere: “Statesboro Blues” David Starr
Bracelet Jonc
Maw Maw’s Old-Fashioned Peach Cobbler
Playing Blackjack From Home Guide
Cold Air After a Shower Almost Kills A Man
How CBD and Cannabis is Changing the American Economy
Discover the Breathtaking Roussillon Ochre Trail, the stunning ‘Colorado of Provence’
Choosing the best Point of Sale system for your business
Merry Christmas and Mahatma Gandhi
Calm by Wellness CBD Review
28% of Americans are Free to Smoke Under Recreational Legalization Laws, Up From 4% in 2012. More Legalization in the Works
A Wonderful Winter Ahead At One Snowmass by Katie Shapiro