Review of YOU COME WHEN I CALL YOU: Douglas Clegg 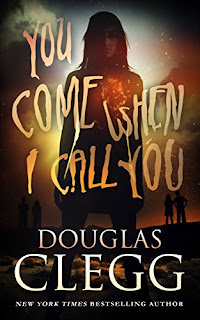 Mind-blowing Horror / Thriller / Mystery
Date Published: September 15, 2012
A Desert Town. A ritual of darkness. An unending horror unleashed.You Come When I Call You is the dark, heart-pounding epic of supernatural horror from New York Times bestselling and award-winning author Douglas Clegg. Nightmares overtake a desert town. Four friends, witnesses to past horror, draw close as visions from childhood return to strike terror in their hearts. And then, someone comes back from the dead...

A Dark Revival
An old friend — from years ago when they were all teenagers in the town of Palmetto, California — is hunting them. He calls himself the Desolation Angel.

A Beautiful Demon
And at the center of it all, a mysterious girl, missing for years -- and the creature that possesses her soul.

"You come when I call you."

"Horror at its finest!" -- Starred Review in Publisher's Weekly.

Karen Wiesner: I Have Dreamed a Littl…
Case Study: Reasonable Accommodation …
Relatos terroríficos de Kanako Inuki
Best Slots You Can Play at Online Cas…
Best Things to Do in Cadaques, Beauti…
REVIEW
Straight Up Terrifying!!!
Palmetto, California. 1980. It’s the last summer friends will spend in the desert town, but it’s one they’ll never forget. What happens is so horrifying, so cataclysmic, that it haunts them to this day. But the soul-shattering nightmares aren’t the only result … there are murders. Gruesome, gory, and disturbing, somehow the past comes alive in the form of inexplicable crimes. But can the present really be blamed on the past? It’s the fear they must face.
Let me just say that YOU COME WHEN I CALL YOU by Douglas Clegg scared the living crap out of me!!! I like to indulge in horror every so often, and when I do, I hope for a storyteller like this one to blow my mind!!! Mission accomplished, Sir Author Sir!!!
I’m not sure where to begin or how to describe this book, but I’ll start with the structure. This story fluctuates between past and present, and I found it to be a very effective device as it allows us to be there, witnessing what the characters did. It puts us in the here and now, and in this story’s case, the here and now is buried in Palmetto.
As for the beginning of this novel, it’s disjointed—and that’s another very smart, very purposeful choice. We get to peek at aspects of the story through journals, recorded interviews, and personal accounts. It opens up so many questions, and draws us right into wanting to solve this mystery. In other words, this is not your usual story, and does not develop in chronological order. So if you like your stories written on the intelligent side, this one’s for you!
As for Douglas Clegg’s writing: SUPERB!!! It’s so good that I didn’t want it to stop, but then I did because it is that good and I was really, really scared! Yes, I’m not the bravest of souls and it’s been a while since I was that frightened. I gotta say it felt sorta good! You know, it’s that dip in the ice water that gets your heart going and simultaneously makes you happy that you’re not in the water anymore!
The suspense is ridiculously amped up, the chills unceasing, and the pacing just enough to allow you to breathe. During the reading of this, my kindle became sort of an alien life force. I’d eye it and think, “Do I really want to go there?” Yes, yes, and yes! I had to find out the secret … the one that left me with my own nightmares.
If you’re a horror fan and haven’t read Douglas Clegg, I HIGHLY recommend that you do! He is at the top of his game and you’re in for a treat. If you’re an occasional indulger like me, again, download and read this book. It definitely delivers on what you’re looking for.
I’m giving this spellbinder 5.0 stars.

Review of YOU COME WHEN I CALL YOU: Douglas Clegg