Can't-Wait Wednesday is a weekly meme hosted over at Wishful Endings to spotlight and discuss the books we're excited about and have yet to read. Generally they're books that have yet to be released, but not necessarily. It's based on Waiting on Wednesday, which was originally hosted at Breaking the Spine.

My pick for this week is a riveting, high-stakes fantasy heist with morally grey thieves for fans of Mistborn and Lies of Locke Lamora... 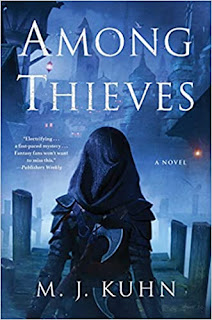 A thrilling fantasy debut—a high-stakes heist novel set in a gritty world of magic and malice, and perfect for fans of Six of Crows!

In just over a year’s time, Ryia Cautella has already earned herself a reputation as the quickest, deadliest blade in the dockside city of Carrowwick—not to mention the sharpest tongue. But Ryia Cautella is not her real name.

For the past six years, a deadly secret has kept her in hiding, running from town to town, doing whatever it takes to stay one step ahead of the formidable Guildmaster—the sovereign ruler of the five kingdoms of Thamorr. No matter how far or fast she travels, his servants never fail to track her down...but even the most powerful men can be defeated.

Ryia’s path now leads directly into the heart of the Guildmaster’s stronghold, and against every instinct she has, it’s not a path she can walk alone. Forced to team up with a crew of assorted miscreants, smugglers, and Thieves, Ryia must plan her next moves very carefully. If she succeeds, her freedom is won once and for all…but unfortunately for Ryia, her new allies are nearly as selfish as she is, and they all have plans of their own.