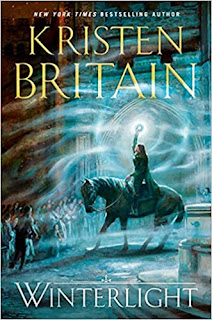 It feels strange to be talking about the penultimate book in a Series arc after 23 years, but Winterlight is the 7th Green Rider novel by Kristen Britain and what's planned as the next-to-last story in the current arc (no worries, she's promised there will be more Green Rider books, just a different story arc).

While I didn't necessarily love Firebrand, I loved a lot about it, and I appreciated the way Britain explored the emotional toll that Mirror Sight left on Karigan. Well, no spoilers, but if you read the 6th book, then you know it didn't just leave poor Karigan with an emotional toll, but with psychological and physical ones as well, and all of that weighs heavily upon the story of Winterlight. What's important is that this isn't a book that wallows in sorrow. Where I found that aspect of Firebrand to be tiresome, even if it was realistic, here the story is one of perseverance, healing, inner conflict, and surprising growth.

With a divide-and-conquer plot, one that sees Sacoridia threatened by the remnants of the Second Empire and the reborn Darrow Raiders, while the dark forces of Mornhavon the Black stir and Lord Amberhill threatens to fulfill his dark future, there's a lot going on here. There are sieges and battles aplenty, not to mention some threats both monstrous and magical that put even more of an edge on the story. The story takes us across the realm, with more settings than I think we've seen in a single Green Rider novel to date, and all of it advances the main plot, leading up to that promised story arc resolution in the next book.

The story of Karigan, Zachary, and Estora gets significant attention here as well, with Britain finally putting all the cards on the table and forcing an awakening, if not a reckoning. There are some fantastic surprises involved in their triangle, including a final sequence that is one of the most emotionally rewarding she's ever written. There's a rather shocking change in Karigan's fate that plays into all of that - all I'll say is that Winterlight means something - and it sets up some interesting questions to be resolved in the next book. It's not all their story, however, and I liked that other Riders, Ash especially, got their chance to lead the charge, take center stage, and advance different aspects of the story.

While there is some divine intervention involved in the story, it's mostly in pursuit of the mythology and character building. Unlike the last book, it's not used to drive resolutions or save the day. It's the Riders, Weapons, soldiers, and common people who drive the story, who take responsibility for the conflict, and who tip the balance in the end. The climax has so many threads, so many fantastic developments, it's one of the most satisfying in the series. It feels like there's still so much to be resolved, too much for one more book, but I'm looking forward to the next book as much as ever.

Green Rider is a series I discovered and the forgot about with the 5-year gap between the first two novels, but rediscovered a few years back as an unabashed standard of 90s epic fantasy and binged my way through the next 4 books before catching up with Firebrand just as it hit mass market paperback. I love this series, I love the style, I love the narrative, and I love the characters. It's one that sticks with me, one of those rare series where I can pick a book up after a few years and still remember everything significant that happened. The more I've become reinvested in the series, the higher my expectations have become for each book, but Winterlight was damned near perfect.

My sincere thanks to the publisher for sending me an ARC in exchange for an honest review.