Haunted? Hunted? When you need a safe place from disaster, heartbreak, or gods trying to break you and drain your blood… come to Sanctuary. It’s New York’s most exclusive club for magical beings and the backdrop of three sexy stories from three award winning authors.

We Choose to Be by Megan Hart
Love is in the air…and the blood. When hemomancer Hadassah meets the woman of her dreams, she has no idea that Yael is actually a blood demon. Is it only the draw of Hadassah’s talents that brings Yael into her bed? Or is there something more. Something that could last. What is love, after all, unless it’s bound by blood?

Sanguine Faith by Brenda Murphy
After a messy break-up leaves Laurel homeless and unemployed, she accepts her great-uncle’s offer of a townhouse and a job. When a seductive spirit trapped in the town house offers Laurel a means of escaping the life her uncle has planned for her, she learns that free does not mean without cost.

Promises Made by Starlight by Fiona Zedde
Abandoned by her wife years before and left devastated, Izzy has recently lost nearly everything else. Her credit is abysmal, she’s underemployed, and her successful best friend treats her like a charity case. But when her wife reappears, breaking her heart all over again, Izzy finds that not everything is as it seems. Blood gods walk the earth, and the one she once welcomed into her bed is back—ready to reclaim what’s hers.

The rap on the car window rattled the glass. Laurel started and slammed her knee into the steering wheel. She cursed softly as she jabbed the window control button. The demon was dressed as a policeman. He wore dark glasses and his beefy hands rested on his thick duty belt nestled between the pepper spray canister and his pistol holster. A slight glow from a pouch near his hip was the only clue to his true identity. Huffing out her frustration at the window’s lack of response, Laurel shoved open the car door.

“You okay?” The officer leaned closer and peered into her face. His feet were squarely inside the circle of salt Laurel had spread around the car the night before.

“You can’t sleep here.” He gestured to the street lined with ancient brownstone townhouses and graffiti covered buildings. “It’s not safe.”

“I’m sorry—” Laurel wiped her hand over her face and squinted at the officer’s name badge. “—Officer Sullivan, is it? I worked a late shift and didn’t feel safe driving anymore. I pulled over here to catch a nap.”

“Stow it. I passed this way last evening, and you were parked here. Your car hasn’t moved.” He leaned closer and removed his sunglasses and slipped them into his shirt pocket. “I know your uncle.”

“Great-uncle.” Laurel stared at his face and inhaled sharply. His eyes were light gray rimmed with red, her image mirrored in their shallow depths. His practiced glare was that of an experienced centurion. Laurel shivered under Sullivan’s gaze, unable to look away from the magical enforcer. He was bound to her clan, sworn to serve and protect. Loyal to a fault, willing to die for the family. Her great-uncle had a legion of centurions, all more than willing to aid and abet his less than legal business dealings.

“Is that so? Why are you here? What do you want?” Laurel pressed her lips together and rolled the hem of her shirt between her fingers.

Officer Sullivan leaned down and spoke softly. “You’re royalty in our world, Laurel. He know you’re sleeping in your car?” His melodious tones seeped into her body as he used the old language, the language of secrets, curses, spells, and death.

Laurel suppressed her shudder. “My roommate kicked me out.” She scrubbed her hand over her face in an attempt to hide the lie. “It was sudden.”

The centurion straightened and pursed his lips. He drummed the fingers of his hand on his holster. “All right, Laurel, if that’s how you want to play it. You need to discuss this with your great-uncle. If you don’t, I will. I don’t want to find you sleeping in your car again.” He tilted his head. “You may not have inherited your family’s abilities but you’re still family. We take care of our own. I can’t spend my nights watching you sleep, keeping watch for the Orions.”

Laurel gripped her keys tightly. Orions. The hunters. So many missing. So many gone in the blink of an eye, their bloodless and mutilated bodies found months or years later. Or worse found still smoldering, their mouths open in voiceless screams. She had taken a chance last night, but after walking in on her girlfriend eyebrows deep between their neighbor’s legs she had stuffed her car full of what it would hold and fled.

“I’ll be safe.” She lifted her shoulders and let them fall, straightening her posture before she settled her hands at nine and three on the steering wheel. “I’ll talk to him today.”

Officer Sullivan stepped back, smearing the salt of the circle she had spread around the car. He pointed at it, lifted his chin, and smirked. “Seriously? It doesn’t work unless you infuse it with energy.”

Laurel inserted the keys into the ignition. “I know.” She looked away from her feeble attempt to protect herself and his smirk. After snapping her seatbelt in place, she waved at him and closed the door. She banged her hand hard on the steering wheel when the telltale click-click-click of a dead battery echoed in the car. “Fuck me.”

Officer Sullivan opened her door. “Come on. I’ll give you a lift.”

Laurel chewed her lip as she looked down at her paint-stained black T-shirt and tatty jeans. “I can’t go like this.”

Officer Sullivan rapped on the top of the car. “Get out. Now. I don’t have all day to deal with you, Laurel. And it’s not worth my life to leave you here with a broken-down car.” He stepped back and crossed his thick arms. “Do I need to assist you in exiting the car?”

Laurel shivered. She had experienced a centurion’s assistance just once and the memory of it still woke her at night. She trembled and wiped her sweaty palms on her jeans. “Let me grab my backpack.”

Laurel gathered the few things she didn’t want to leave in the car. After jamming her sketchbook next to her ancient laptop in her bag, she zipped the top closed and grabbed her hooded sweatshirt from the backseat before she exited the car.

“I’d really like coffee. I can’t talk to Great-uncle Marcus without some caffeine on board.”

“Come on, I’ll buy you breakfast.”

“Why’d you let me sleep there last night if you were just going to take me to my uncle today?”

Laurel glanced at Officer Sullivan walking beside her. “Thank you.”

“No problem. To serve and protect. Even if it’s from yourself.” He held the car door open, and she slid onto the cool leather seat. She settled her backpack between her feet and pulled on her black hooded sweatshirt. The car shifted to the side as Officer Sullivan entered and levered his bulk behind the wheel.

He waited until she had fastened her seatbelt before he started the car. Laurel’s gaze slid over the array of weapons lining the car. Magical weapons clipped into racks side by side with conventional firearms, their soft glow visible to Laurel.

Able to see magic, unable to wield her own power, the last female of a clan stretching back eons, unwilling to assume her role as clan leader and unwilling to produce an heir, Laurel chewed her lip as the car shot forward bringing her closer to her great-uncle’s house.

Laurel shifted in her seat and drummed her fingers on her knees. “You worked for my mom and dad, didn’t you?”

Laurel stared out of the window. A familiar ache settled in her chest. There were some things even magic couldn’t protect you from. The ratty buildings gave way to well-kept streets and high-rise buildings. The sidewalks were crowded with people scurrying to work and school.

“Do you think the humans ever get it? Like, do they know about us? Really get it? Other than the ones we make consorts?”

“Humans see what they want to see. If they ever understood how powerful supernaturals are, they would freak right the fuck out. And try to exterminate us. Again. All of us. Their unwillingness to see and believe is what keeps us safe.” He tapped the pistol on his belt. “And this.”

Laurel shuddered as the car slowed and stopped.

Officer Sullivan turned off the engine and preened in the rearview mirror a moment before he turned his head to face Laurel. “How do you take your coffee?”

“Black. Unless it’s that dark roast crap. Then make it white as a virgin’s wedding dress.”

Officer Sullivan’s loud guffaw exploded in the quiet of the car. “You got it.” He left the car.

Laurel glanced at the tarnished Saint Christopher medal stuck to the car’s headliner and rolled her eyes. A group of humans rushed past, small children and their adults, animated and laughing, their voices muffled by the car window. The gentle ache in her heart blossomed into full-blown longing. Laurel blinked the grit of exhaustion from her eyes, leaned back against the headrest, and rehearsed the story she would spin for her great-uncle, hoping he would listen, knowing he would not. 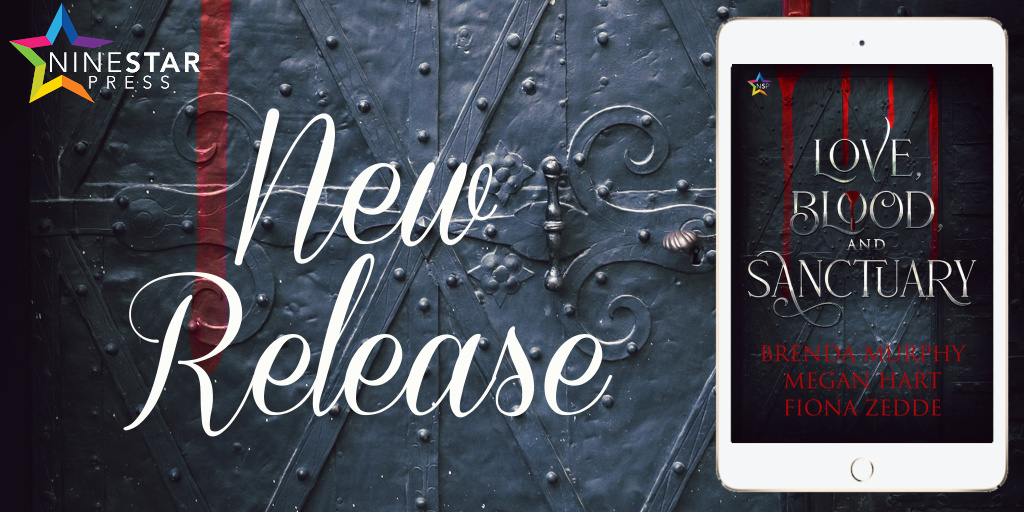 I hope you enjoy reading this book as much as I enjoyed writing it. For a free short story, information on book signings, appearances, work in progress snippets, previews and sneak-peeks, sign up for my email list at: http://www.brendalmurphy.com/

Megan Hart writes books. Some of them use bad words, but most of the other words are okay. Some of them hit bestseller lists and win awards and some don’t, but that’s the way it goes. She can’t live without music, the internet, or the ocean, but she and soda have achieved an amicable uncoupling. She loathes the feeling of corduroy or velvet, and modern art leaves her cold. She writes a little bit of everything from horror to romance, though she’s best known for writing steamy fiction that sometimes makes you cry.

Fiona Zedde was born under the Jamaican sun but now makes her home in Spain. Since getting the writing bug, she’s published around thirty books and short stories, mostly about black queer romance, including the Lambda Literary Award finalists, Bliss and Every Dark Desire. Her novel Dangerous Pleasures received a Publishers Weekly starred review and was winner of an About.com Readers’ Choice Award for Best Lesbian Novel or Memoir.

At this very second, she’s probably writing another book, and it has 100 percent chance of having queer romance and queer women in it. Her pseudo-healthy obsessions are French pastries, English cars, and Jamaican food.

a Rafflecopter giveaway
© 2021 Beauty in Ruins All Rights Reserved