"Waiting On" Wednesday is a weekly event, hosted by Jill over at Breaking the Spine, that spotlights upcoming releases that we're eagerly anticipating. 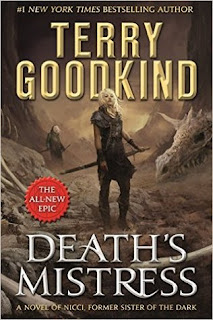 Onetime lieutenant of the evil Emperor Jagang, known as "Death's Mistress" and the "Slave Queen", the deadly Nicci captured Richard Rahl in order to convince him that the Imperial Order stood for the greater good. But it was Richard who converted Nicci instead, and for years thereafter she served Richard and Kahlan as one of their closest friends--and one of their most lethal defenders.

Now, with the reign of Richard and Kahlan finally stabilized, Nicci has set out on her own for new adventures. Her first job being to keep the unworldly prophet Nathan out of trouble...

Death's Mistress: Sister of Darkness will launch The Nicci Chronicles, Terry Goodkind's entirely new series with a cast of characters centered on one of his best-loved characters in the now-concluded Sword of Truth.


I've always had something of an awkward relationship with Terry Goodkind. I loved the first 3 Sword of Truth novels, and still count them among my favorite epic fantasy reads. I found the middle novels to be rather weak and repetitive, but I also felt he redeemed himself exceptionally well with the final duology . . . before getting tirelessly repetitive again with the opening instalment of the Richard and Kahlan series that followed.

While I have yet to read The First Confessor, it's on my list for the same reason this is - I'm curious to see what Goodkind can do with the world, unencumbered by the legacy of Richard, Kahlan, and the Sword.
© 2016 Beauty in Ruins All Rights Reserved