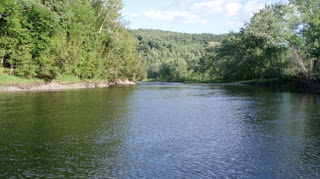 The photo is of the Connecticut River which separates New Hampshire and Vermont.  It's just one example of how boundaries--arbitrary and otherwise--divide and influence people.

In this case, the state line is not the middle of the river, but the high water mark on the western side.  This has meant that the good sites for power dams are mostly in New Hampshire, which in turn meant that it was much easier for that state to turn to manufacturing, while Vermont continued as an agricultural state.

I'll be talking about this boundary and others when I take part in one of the CIFAR-The Walrus Talks on Monday Sept. 23 from 7-9 p.m. at the Canadian Museum of History in Gatineau. The topic is Boundaries and my presentation is titled (at the moment at least) Across the River, the Height of the Land: Physical and Political Boundaries.  Tickets at https://thewalrus.ca/events/

And of course boundaries lie at the heart of my new book Frenemy Nations: Love and Hate between Neighbo(u)ring States which the University of Regina Press will be bringing out next month.

NEXT MONTH!  Hard to believe since this project has been in the works for so long. There will be more about the launch later.