Espionage Thrillers Can Be Female-Friendly

Often, I wonder if I am the only female reader of hardcore espionage thrillers written by authors like Brad Thor and Vince Flynn.  Their books are written with the male reader in mind, play out like an action flick and are very different in tone from the Romantic-Suspense novels written for women by two of the genre’s top talents:  Cherry Adair and Tara Janzen.

I think female readers tend to shy away from Thor’s Series featuring blonde hottie Scot Harvath and Vince Flynn’s sexy, brooding Mitch Rapp (coming soon to a theater near you!) because the covers of these books look boring and utilitarian, often featuring an American flag or eagle or something symbolic like that.  These books are often located far, far away from the romance section and the author’s picture on the back of the book usually show commanding, stern-faced men who couldn’t possibly write to a woman’s sensibilities.

Well, they don’t, not really and that is okay.  They have female characters just like any good action movie and they do a swell job of fleshing out the feminine characters in a realistic way.  But if you’re looking for excessive descriptions of clothes, mentions of Jimmy Choos, sweeping head to toe descriptions of characters, you’ll probably be disappointed and should go directly here.  Much like a very dry Cabernet Sauvignon, I find their writing to be an acquired taste,  a taste for which I developed after reading Robert Ludlum’s older works.

Let’s start first with Vince Flynn.  His series centers around Mitch Rapp.  As I mentioned, he’s tall, dark and handsome and a stone cold killer, in the employ of the U.S. government of course.  His technical term is Counter-Terrorism Operative and he is an undercover agent for the CIA. (I can totally see Gerard Butler in this role.)  The series begins with Transfer Of Power and Rapp attempting to save the White House from terrorists.  (Does he succeed?  Read the book.) The series follows Mitch and eerily, current events as terrorism becomes more of a threat to the U.S. and her allies.   Mitch Rapp fights the good fight, whether or not he has the support of Capitol Hill.  It’s a really good series and if you like shows like 24 and The Unit, or movies like Mr. And Mrs. Smith or the Jason Bourne franchise, I’m pretty sure you’ll become addicted to this series. 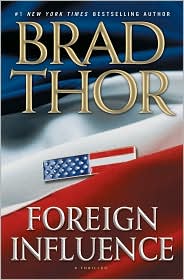 Navy Seal and currently a Secret Service agent on the presidential detail.  He attempts to rescue the President of the United States, who is kidnapped in a brazen attack that leaves thirty Secret Service agents dead.  This series follows Scot Harvath who eventually leaves the Secret Service and like Mitch Rapp becomes a Counter-Terrorism Operative.  He does his best to protect America from all enemies, foreign and domestic.

I am really excited to read Thor’s next book and the beginning of a new series which will center around The Athena Project, an elite team of female special forces operative based at Ft. Bragg, NC.  The series will begin with their recruitment and follow them to their deployments around the world.  This novel should be available just in time for Thanksgiving 2010.

Really, I would think these types of books would go over huge with women but I don’t see publishers spending advertising or marketing dollars to promote these authors to this market.  I mean, come on, how many women Love a man  in uniform?  How many women would love to spend a (totally make-believe) night with (the very fictional)  James Bond or James Bourne (or is that just me?)

Authors Cherry Adair and Tara Janzen’s have sold hundreds of thousands of books writing about spies and the women who love them in their series.   Flynn and Thor have great websites but Cherry Adair’s sight is not to be missed!  There’s the ominous music, the pictures of real guys, dossiers on secret missions.  Really, I love, love, love her site.  I’ve read her books White Heat and Hot Ice (about the men and women of TFLAC-Terrorist Force Logistical Assault Command) and whole heartedly recommend them to you, dear reader.

I cannot, however recommend her novel Night Fall and the other novels belonging to the TFLAC PSI Unit series that mix espionage and wizardry (yes folks, I said wizardry).  I actually tried to read this novel and gave up in the middle.  I just couldn’t suspend disbelief and accept that covert operatives in addition to being gorgeous and highly trained government agents also had supernatural abilities.  It’s probably just me though, because her books sell like hotcakes and if check here, you’ll see that she’s written a million, gazillion books.  I like espionage thrillers and I like supernatural, I do not, however, like them together.  Harry Potter as 007 just doesn’t do it for me.

There is also Tara Janzen’s excellent series of gorgeous, danger-loving hunks in her Steele

Street series that begins with Crazy Hot and ends with Crazy Sweet.  Her books are heavy on the ‘hot and heavy’ with a huge helping of technical terms about guns and bullets (enough to convince any laymen at least, that she knows what the heck she is writing about) and lots o’action.  Her series features the men of Special Defense Forces and the women who loves them.  Crazy Kisses is one of my faves.

If you read Flynn and Thor and like their style, try Robert Ludlum (the older books written by him and not posthumously with a ghostwriter) and David Baldacci.  If you like your espionage with a heaping side of bodice ripping, try The Smuggler Wore Silk by Alyssa Alexander, it’s an edgy historical romance with equal amounts of steamy love scenes and action and adventure.

Espionage Thrillers Can Be Female-Friendly