Something Waiting In The Dark: A Gay Monster Harem Serial by Sadie Sins

After his father is laid off, Ky Scion is forced to reside in his ancient family manor in the small town of Blackstone Falls. He’s an outcast to the local farmers, too Goth and too gay. Ky turns to repairing the huge house while pursuing an art degree. His parents are blind to the terrible secret he discovers among the bloodstained walls. Something lives in the dark, in the nooks and hideaways of the old house. Someone with hot breath and strong hands who wakes Ky up in the middle of the night.

In the dark hides the powerful Relics. Unique and beautiful, they’re exploited for their magic and fought after viciously. Relics aren’t items, they’re sentient beings, demonic men stolen from their world to be bonded into servitude to callous sorcerers.

Ky’s grandfather disappeared years ago, leaving his Relics to be killed off one by one. The monster who feeds on the Relics smells of rot and blood, and is soon to attack. Ky’s not a sorcerer, and has no way to defend himself from the murderous beast set on revenge.

Hampton Cannabis Expo Founder Gary Bi…
LYRICS: Pdot O – Holy Ghost Cry
How To Help Your Husband Get On Board…
Feelings and Cancer
An Act of God? 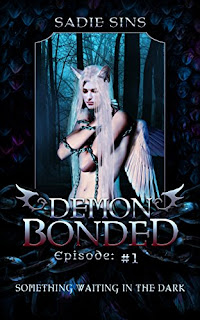 For a first taste of A Gay Monster Harem Serial (currently a 10-book serial), Something Waiting In The Dark was such a fantastic story! Ky is absolutely lovely. He's gay, goth, and an artist, but not your stereotypical brooding, depressive stereotype, but a happy, reasonably well-adjusted boy with a desire to create.

The ancient family manor he and his parents have just moved into is a perfect setting, part spacious dream palace, and part haunted nightmare dungeon. There's a backstory there that's only teased, but we know nobody else in the family has been able to live there long, and Ky's parents wouldn't have chosen it either were they not in dire financial straits.

The teasing glimpses of the cat-like demon who stalks the walls are exciting, just enough to let you know what's going on, but not so much that they spoil what I imagine will be a big reveal to come. Sadie Sins really plays with the cat-like aspects, going so far as to leave scratch marks and dead presents of mice on the bed.

Bring on the next episode (Breathing Under the Bed) or, better yet, check out the Demencious Saga bundle of the first 4 instalments!


This post first appeared on WTF Are You Reading?, please read the originial post: here
People also like
Hampton Cannabis Expo Founder Gary Bierfriend On Conference's 5th New York Season
LYRICS: Pdot O – Holy Ghost Cry
How To Help Your Husband Get On Board With Prepping – Part 2
Feelings and Cancer
An Act of God?
Boity saved my life – Lerato Kganyago

Something Waiting In The Dark: A Gay Monster Harem Serial by Sadie Sins