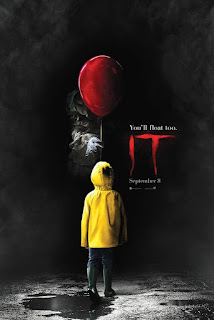 Well, the bad news is that DVD and Blu-ray issues of Stephen King’s It won’t be in the shops in time for Christmas 2017.

The good news, however, is that you will be able to download or stream the film if you want to watch It during the holiday period!

Read on to find out when Chapter One of Stephen King’s It will be available in the Digital, DVD and Blu-ray formats.

The new Stephen King’s It film is directed by Andy Muschietti and stars Bill Skarsgård in the role of Pennywise the Clown. Bill Skarsgård’s portrayal of Pennywise is truly creepy and the re-imagined image of the evil that stalks Derry is superb. Combine that with the wonderful performances of the young actors that were selected to pay the Losers Club, and you have a wonderful interpretation of Stephen King’s horror classic.

The development of Chapter Two of Stephen king’s It has already started. The young Losers Club is expected to be seen again in flashbacks in the next film, but there is no news yet in who will be playing the adult versions of the Losers Club.

The 2017 adaptation of Stephen King’s It will available for streaming and downloading in high definition and standard definition on December 19, 2017. The digital version of the film will be available from a select number of sources, including iTunes, Amazon, PlayStation, Xbox and Vudu. You will also be able to find It Chapter One on the video on demand services of some satellite and cable TV suppliers.

You can pre-order from Amazon now:


You can pre-order from Amazon now:

When Is Stephen King’s It Chapter Two Going to Be Released?

With Chapter One of the Stephen King’s It remake having been so successful, there is no doubt whatsoever that Chapter Two will now be made. In fact, work has already started in the second instalment of It and the film is currently scheduled to be released in cinemas on September 6, 2019.


This post first appeared on Stephen King Store, please read the originial post: here
People also like
Short Happiness Quotes From Famous and Unknown People
Vertiv Names Stephen Liang Chief Technology Officer
Canopy by Hilton, Philadelphia
How To Make Sex Better In Long-Term Relationships
Ratt Problem – GEICO Insurance
Interview with the legendary comic book artist and writer William Messner-Loebs
Rochester Exterminator | #1 Caring For People
Remembering Woodstock On Its 50 Year Anniversary
Rabies – What to Do If You Get Bitten by a Rabid Animal
Yet another hurdles for Libra by the lawmakers, might delay the Libra launch
Rocketman (2019) Review