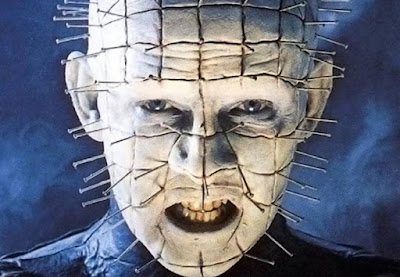 Whether it is a demon from Hell, a child killer that stalks your nightmares, or an evil entity that takes on the form of a clown, the makers of Horror films and the writers of horror fiction are forever trying to conjure up characters that will tap into our darkest fears.

First, there were the classic horror villains, such as Frankenstein’s Monster, Dracula and Werewolves, and then Hollywood began to come up with even more sinister baddies to haunt your dreams.


Perfecting a horror villain is not as simple as it may seem. There is a fine line between scary and farce. After all, who can forget the villains in films like the Killer Klowns from Outer Space, or the Attack of the Killer Tomatoes?

When they get it right, though, the filmmakers’ horrific character inventions get stuck in our minds and that usually leads to a string of sequels, sadly, each one slightly more farcical than the last.

However, we all still enjoy a truly terrifying villain, so here’s our own top ten of the best modern horror film villains. 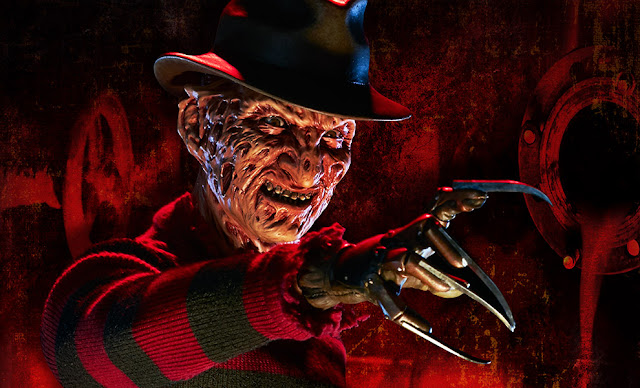 If you want a lesson on how to create a Horror Movie icon, then you need look no further than Freddy Kruger from Wes Craven’s A Nightmare on Elm Street. The very concept of A Nightmare on Elm Street was brilliant; it is’ literally, your worst nightmare come true. Freddy evolved over a series of sequels, from a truly terrifying horror movie villain, into a wisecracking monster with some great one-liners. Ultimately, Freddy Kruger, played by Robert Englund, became a horror film anti-hero that audiences laughed at and feared in equal measures. 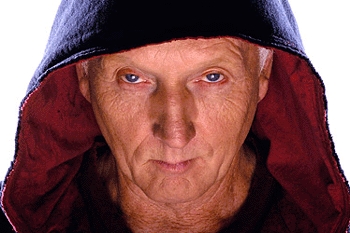 A horror movie villain that never actually kills anyone with his own hands, Jigsaw first appeared in the 2004 American horror film Saw. Jigsaw is one nasty serial killer, even if never gets blood on his own hands. Instead, he places his victims in situations where they can choose to either inflict pain on themselves or other people, or wait to die. The first film was a clever new take on the genre with a surprising twist at the end. While the subsequent sequels were somewhat limited by the original premise, some of the “games” set for the victims were quite ingenious. As horror franchise sequels go, the Saw series of films did manage to maintain much of what had made the original Saw film so successful. 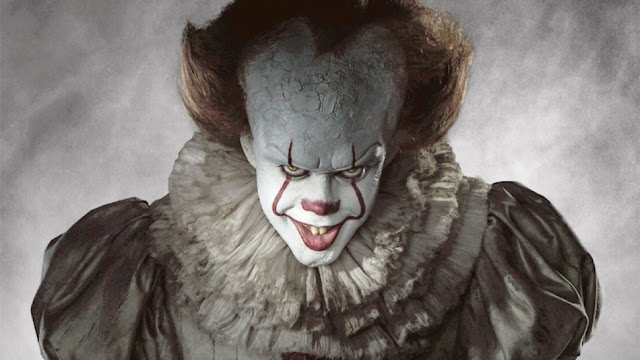 First brought to life by Tim Curry in the 1990 TV miniseries and now reborn in a new form in the new 2017 movie, Pennywise the clown from Stephen King’s It is one of the all-time greatest horror character inventions. Throughout history, clowns have invoked both fear and joy in Kid’s and Pennywise plays perfectly on those mixed emotions.  Incidentally, if the new Bill Skarsgård Pennywise has given you a deep fear of clowns and you were wondering what to call your phobia;  you are now suffering from coulrophobia.

Hannibal Lecter - The Silence of the Lambs 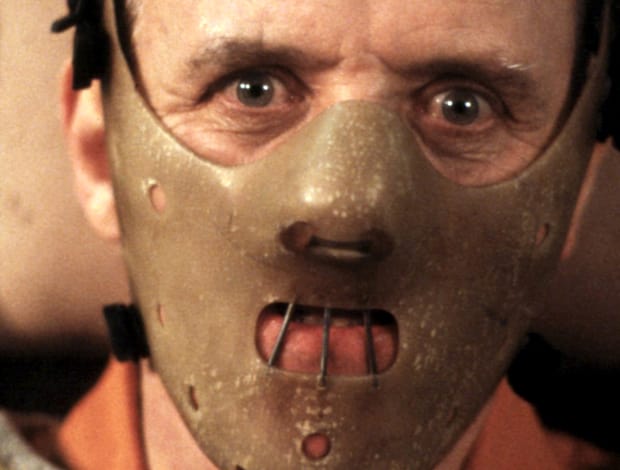 The Silence of the Lambs and subsequent equals are truly chilling films and that, for the most part, is down to the amazing way that Anthony Hopkins plays the villain of the piece, Dr Hannibal Lecter. As if being a serial killer and cannibal wasn’t enough, Lector is also a cold, calculating and manipulative killer who knows just how to get the upper hand over anyone. The original Silence of the Lambs won five academy awards, including Best Picture, Best Actor, Best Actress and Best Director. It’s a horror classic not to be to be missed. 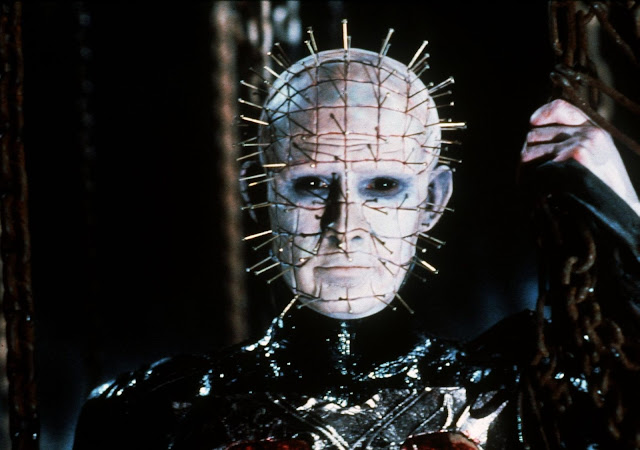 Pinhead, from Clive Barker’s Hellraiser, was an unusual horror film villain for the time when he first appeared in the 1987 film, because, unlike most horror movies villains of the 1980s, he was intelligent and articulate. Played by Doug Bradley, Pinhead is the leader of the Cenobites, who are evil creatures that were once human but now live in extradimensional realm. The Cenobites can return to earth to harvest human souls via a puzzle box known as the Lament Configuration. Pinhead oozes evil and menace, but he still manages to get some great one-liners too in what is a great series of horror films that, in some scenes, can be really quite disturbing.
- 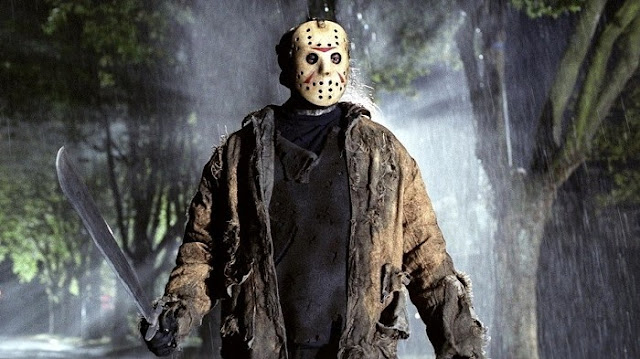 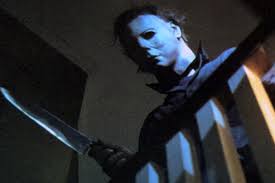 Michael Myers is another masked slasher who has become a horror movie icon. The famous mask used in the Halloween film was actually a slightly altered Captain Kirk mask.  Myers is an escaped patient from a Sanatorium, who had stabbed his sister to death when he was a child. Once he has escaped, he goes on a killing spree that lasted for ten films in all and saw Myers return, no end of times, from the dead. Jamie Lee Curtis will be reprising her role of Laurie Strode from the original film in a new Halloween movie that is due to be released in October 2018. 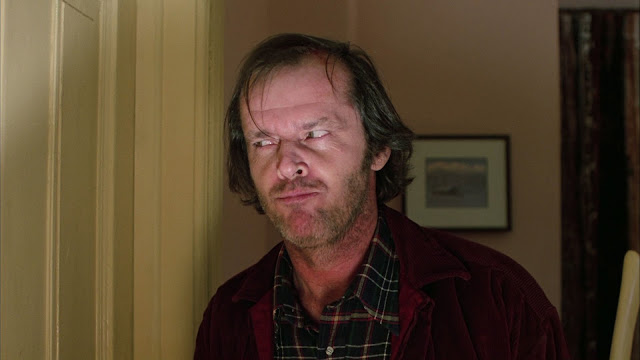 Even though the Jack Torrance as portrayed by Jack Nicholson in the 1980 Stanley Kubrick film is very different from the Jack Torrance in Stephen King’s The Shining novel, the film Jack is an iconic horror movie villain. In the film, Jack Torrance is nuts for the outset and it’s his own demons that push him right over the edge.  Jack Nicholson’s portrayal of a man descending into complete madness is brilliant. The Shining well deserves its reputation of being one of the best horror movies ever made. 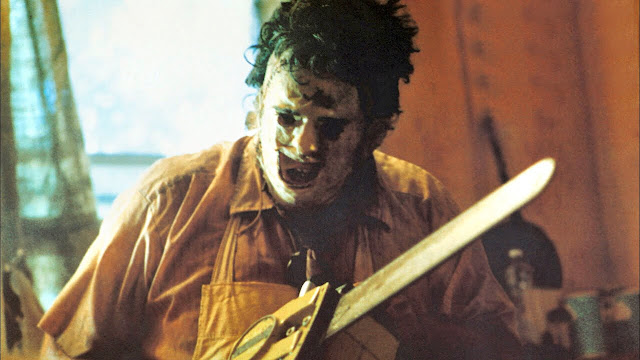 The wielder of the chainsaw in Tobe Hooper’s 1974 The Chainsaw Massacre and subsequent sequels, Leatherface has become one of the most instantly recognizable horror movie villains, even to people who have never seen the film. Leatherface was a member of a family of cannibals and his mask is made from the skin of some of his victims.  The film spawned 7 sequels, including a remake of the original film in 2003. 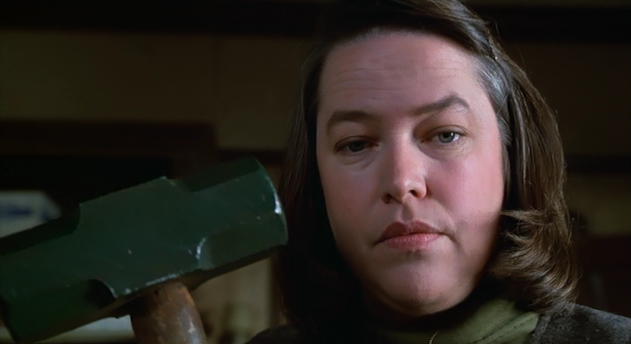 We finish our top ten of iconic horror film villains with the incredibly menacing Annie Wilkes, as played by Kathy Bates in the 1990 film adaptation of Stephen King’s Misery. Kathy Bates won the Academy Award for Best Actress for this role, and rightly so. Annie Wilkes, who keeps author Paul Sheldon prisoner until he rewrites a book the way that she wants it written, is one of the most terrifying horror villains of all time. A woman who says she adores you, but who will stop at nothing to get her own way. What could be worse!


This post first appeared on Stephen King Store, please read the originial post: here
People also like
Meow Bar, Moscow
Music Profile: Crissi Cochrane - Soul Singer Songwriter - Ontario, Canada | SRL Networks London Music PR
“The Friend Who May Not Seem a Friend” – The Cat and the Fire, Post 2 of 3
What Causes Bed Bugs?
Self Motivation: How to Keep Moving Forward In Your Career or Business
10 Notable Online Video Makers That is Sure to Give Your Business an Edge
Capture Attention and Drive Traffic with Catchy Headlines: 7 Ideas for Blog Titles
Things You Should Stop Worrying About in Bed
Why the Riddler is such a good villain for The Batman film
Nigerians React as Mr Macaroni Bag 1960Bet Ambassador
Boomerang – New Telugu Short Film 2018 || Directed by Sridhar Marepalli || Silly Shots