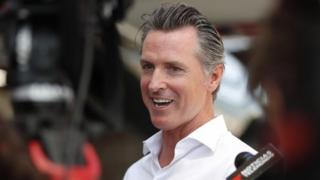 US President Donald Trump and the Republican Party are suing California over recent legislation requiring presidential candidates to file tax returns in order to stand in primaries.

In two lawsuits, the plaintiffs said it was unconstitutional as it added an extra requirement to run for president.

Mr Trump has refused to release his tax returns, saying that they are under audit.

California is the first state to succeed in passing such a law, though others under Democratic control have tried.

It would apply to ballots for primary elections but not the general election.

The state is involved in more than 40 lawsuits against the Trump White House on issues such as environmental regulation and immigration.

In the first lawsuit, the Republican National Committee said the law was “a naked political attack against the sitting president of the United States”.

It argues that the law would “directly impede” Mr Trump’s chances of gaining the Republican nomination. California provides 14% of delegates needed to win.

A second lawsuit by the Trump campaign argues that states do not have the power to supplement qualifications for president set out by the US Constitution.

Currently there are only three requirements for presidential candidates – to be natural born citizens, over the age of 35 and resident in the US for at least 14 years.

Mr Trump’s counsel, Jay Sekulow, described the law as an “attempt to circumvent the US Constitution”.

He said voters had already spoken about whether Mr Trump should release his tax returns.

However, Mr Trump is the first major-party presidential nominee not to release any tax returns since Republican Gerald Ford in 1976.

Hemp Land USA Review
CBD 2020: What to Expect + Our Top Pr…
How to Create a Winning Black Friday …
Bitbay to Break Relations with Monero…
Remembrance Day, as Seen Through the …