Need a Job? Chances Are You’ll Get One

Last week the Labor Department announced a 4.7 percent unemployment rate, marking the 75th straight month of job growth — the longest sustained growth since 1939. You’d think companies had most of their positions filled by now, right? Nope. And that’s good for you.

Instant Cryptocurrency Confirmation c…
How to Love Mondays and The Rest of T…
Best Story-Rich Games on PC: November…
A guide to male enhancement – Tacklin…
Can Employee referrals help you hire …

“Three in four employers reported that they are in a better financial position than they were a year ago, which is instilling more confidence in adding people to their payrolls,” says CareerBuilder CEO Matt Ferguson. “One of the key challenges for employers will be bridging the talent gaps within their own organizations by either offering better wages or by helping to reskill and upskill workers.” 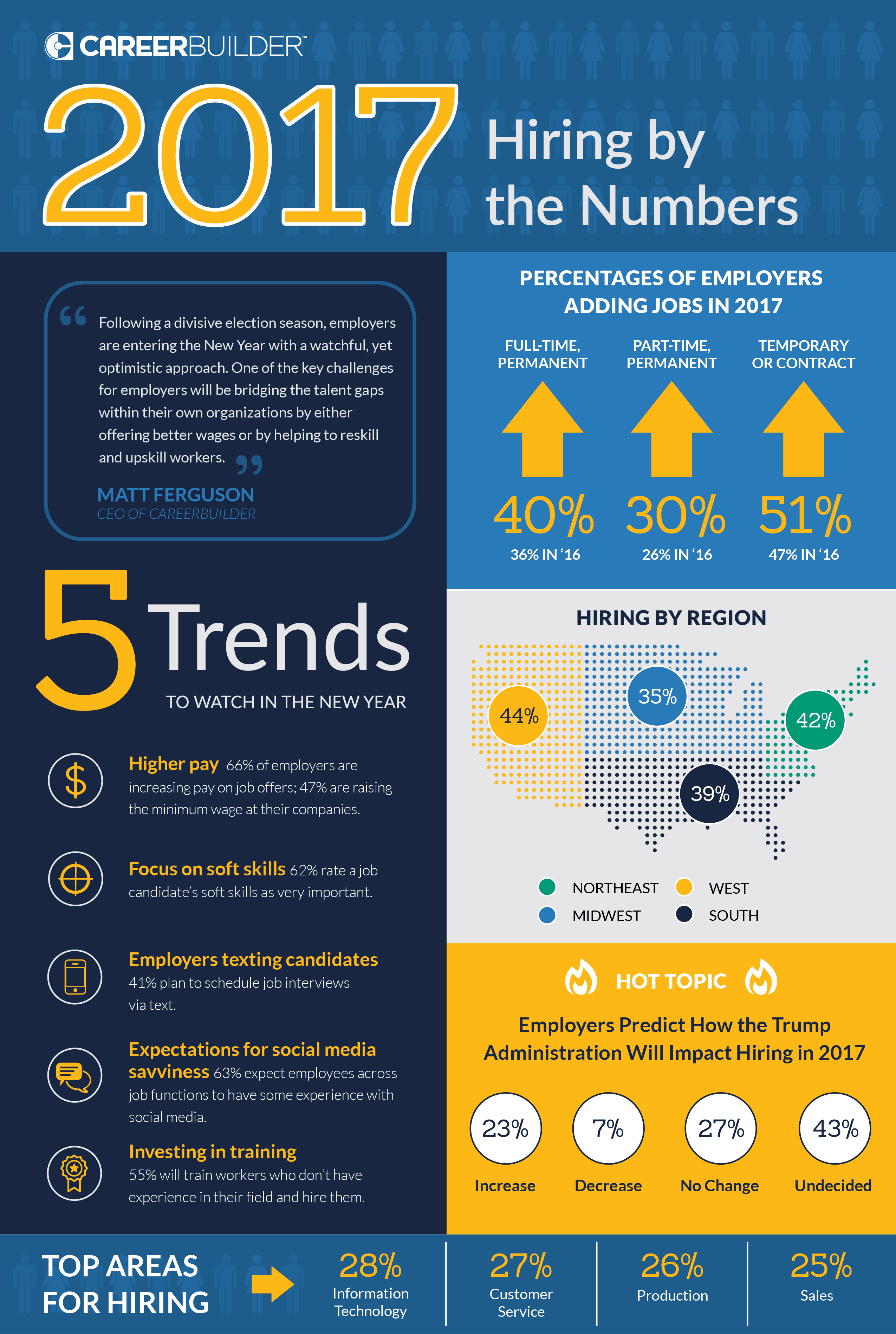 The study shows that employers will be under a lot of pressure to offer higher pay this year. Luckily, two-thirds of them plan to increase salaries on initial job offers, with 30 percent going up by at least 5 percent. Almost half will be increasing minimum wage by $3-$5 an hour. This is the highest rate of increase in seven years.

And it’s not just better wages — it’s more hours, too, as more full-time permanent jobs are becoming available and people are shifting away from part-time employment. This year, expect 40 percent of companies to be on the hunt for these positions. Only eight percent of employers expect a fall in staff levels this year (down 2 percentage points from this time last year).

The hot spots for hiring

When it comes to sectors, information technology takes the top spot. Companies plan to increase IT hiring by 28 percent. Customer service will jump 27 percent, while sales will go up 25 percent.

Changing fields soon? No worries, regional hiring will be impacted as well. Head west for work, as that will see the biggest jump in new jobs.

But it was the Northwest that had the highest year-over-year improvement in full-time, permanent hires, going up from 30 percent to 42 percent. The South expects a 3-percentage-point jump to 39 percent while the Midwest will go up to 35 percent, up 1 percentage point from this time last year.

Other hiring changes this year

The CareerBuilder study says companies want candidates to talk about their soft skills — like attitude, personality, teamwork, and personal responsibility. Along with that, social media skills will be expected in nearly two-thirds of employee job functions, so be sure to brush up on your social management!

Look out for managers to be in constant communication. Can you handle getting a text from a hiring manager? CareerBuilder says 41 percent of employers will be reaching out to candidates via text messages to schedule interviews.

Experience, while necessary, may not be a huge deciding factor for companies. The study says: “55 percent of employers said they will train workers who don’t have experience in their field and hire them in 2017.”

River flowing towards a cave

My new idea in my relationship with depression

Need a Job? Chances Are You’ll Get One