Vancouver, British Columbia--(Newsfile Corp. - February 12, 2019) - Spearmint Resources Inc. (CSE: SPMT) (OTC Pink: SPMTF) (FSE: A2AHL5) (the "Company") is pleased to announce that upon receiving a complete set of airborne data showing the presence of anomalies outside the boundaries of the Company's pre-existing acreage, the Company has strategically increased its Chibougamau Vanadium Prospect by 2,190 acres to a total of 16,175 contiguous acres. The recently received airborne data shows the presence of multiple sharply defined areas of northeast trending magnetic susceptibility, including an anomaly measuring 9km in length, which has now expanded to a total of 12km in length with the acquisition of the new claims (Figure 1).

Highlands, Buttermilk Opening and Sum…
Instant Cryptocurrency Confirmation c…
The Top 11 Things To Do In The Huacac…
Google News: Learn how to do SEO for …
Why is it so much harder when you hav…

James Nelson, President of Spearmint, stated "We are pleased to have received such encouraging data from the airborne survey recently completed over our Chibougamau Vanadium Prospect. In light of receiving this complete set of data, we immediately and strategically expanded our land package to cover new anomalies identified outside of our pre-existing acreage. The airborne data has identified multiple sharply defined magnetic anomalies, including one anomaly measuring 9km in length which has now grown to 12 km with the new claims acquisition. This newly acquired acreage certainly strengthens our footprint in this world class Vanadium district. A follow up work program is being formulated and management is excited to further investigate these anomalies to determine whether they are vanadium bearing like that of our neighbour BlackRock Metals." 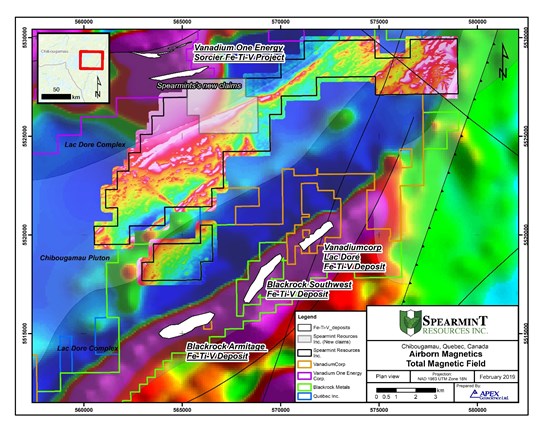 Spearmint's vanadium prospect borders the vanadium deposit of BlackRock Metal's (private) Ilmenite vanadium project and Vanadium One Energy Corp.'s Mont Sorcier vanadium project. Vanadium has garnered significant market attention recently as the use of vanadium in battery storage is gaining momentum and Spearmint is very pleased to maintain a significant footprint in one of Canada's best-known vanadium districts. Vanadium has been the best performing battery metal over the past two years going from under $5 USD per pound to recently reaching an all-time high of over $33 USD per pound. On August 21, 2018, the Government of Quebec announced a $248-million investment in the BlackRock Metals Vanadium Project and the development of the Grande-Anse sector with the total project representing investments valued at nearly $1.3 billion and will create more than 800 jobs during the construction of the mine and mill. (Source: News Release from Office of the Deputy Prime Minister, Minister of the Economy, Science and Innovation and Minister responsible for the Digital Agenda, August 21, 2018, 09:30 EST.)

Kristopher Raffle P.Geo., Principal, of APEX Geoscience Ltd., a Qualified Person as defined by National Instrument 43-101 reviewed, verified, and compiled the data reported herein specific to the Chibougamau Vanadium Prospects. Mr. Raffle has reviewed and approved the scientific and technical disclosure in this news release.

If you would like to be added to Spearmint's news distribution list, please send your email address to
[email protected]

The CSE has not reviewed and does not accept responsibility for the adequacy or accuracy of the content of this release.

To view the source version of this press release, please visit https://www.newsfilecorp.com/release/42769