Toronto, Ontario--(Newsfile Corp. - October 30, 2018) - Cordoba Minerals Corp. (TSXV: CDB) (OTCQX: CDBMF) ("Cordoba" or the "Company") today provides an update on recent exploration activities at its Alacran Deposit, located within the 100%-owned San Matias Copper-Gold Project in Colombia. A detailed investigation into the source of Alacran mineralization has led to the identification of a potential porphyry copper-gold source located immediately west of the Alacran Deposit. Drill targets are being finalized ahead of a planned 1,500 metre diamond drill program.

California’s Silvergate Bank Bets on …
How to Get Free Cryptocurrency
PrimedeQ: One Stop Shop for New & Use…
7 Risks You Need to Take in Your 20s …
5 Factors to Consider before You Star…

"We are very pleased by the considerable progress being made at our Alacran Deposit," commented Mario Stifano, President and CEO of Cordoba Minerals. "Through new surface mapping and by re-studying historical diamond drill core, our geological team has identified clasts of porphyry-style mineralization contained within intrusive breccias. We are in the process of finalizing drill targets and expect to commence diamond drilling in the coming weeks." 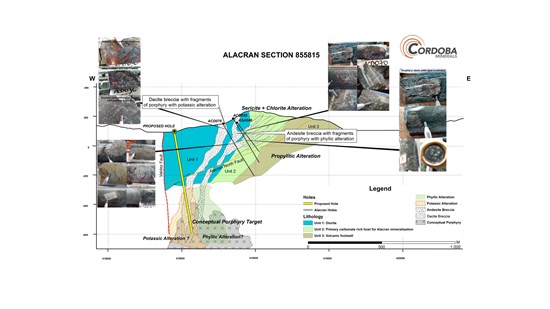 Previously, the focus of exploration at Alacran was to identify massive magnetite and sulphide mantos that replace the Unit 2 carbonate-rich mudstone. This style of mineralization extends over approximately 900 metres from South to Central Alacran and can have a true thickness of up to 40 metres (refer to Figure 2 below). In the north of the Deposit, the manto mineralization transitions to CBM feeder-style mineralization.

The CBM feeder zones consist of carbonate, sericite and albite containing pyrite, chalcopyrite and sphalerite. Hydrothermal fluids are interpreted to have moved along the bedding of the volcano-sedimentary host rocks by exploiting fractures and porosity. 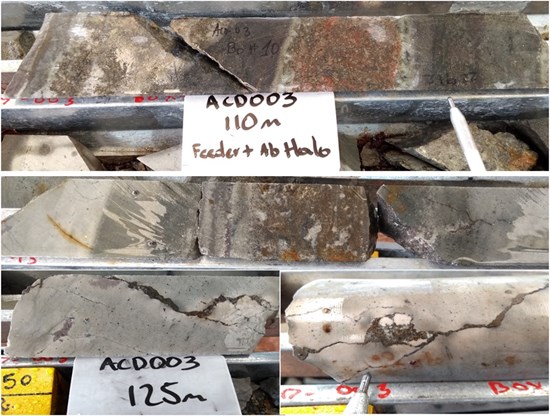 During recent "boots on the ground" fieldwork, Cordoba's geologists noted that current artisanal mining located near the town of Alacran had exposed a body of intrusive breccia. Through subsequent mapping and drill core re-logging, Cordoba's geologists have been able to identify two distinct types of breccia, each containing clasts with porphyry-style alteration and mineralization.

The dacitic breccia is particularly interesting because it has a porphyritic dacite matrix and contains angular clasts of hornblende porphyry with both potassic and phyllic alteration. Importantly, the clasts with potassic alteration also contain porphyry-style A veins.

Previously identified internal metal zoning patterns within the Alacran Deposit (refer to Cordoba's August 8, 2018 news release), which show increased gold, copper, silver and zinc values in the Central and Northern portion of the Deposit, are now believed to be spatially related to the breccias.

Figure 6: Breccias related to mineralized zones in the Alacran Deposit.

Evidence of a Nearby Mineralized Porphyry Deposit

Altered porphyry clasts are present in both the dacitic and andesitic breccias; however, only in the dacitic breccia are clasts with potassic alteration observed. These fragments have disseminated magnetite and feature sinuous Type A veinlets of saccharoidal quartz containing magnetite and chalcopyrite. 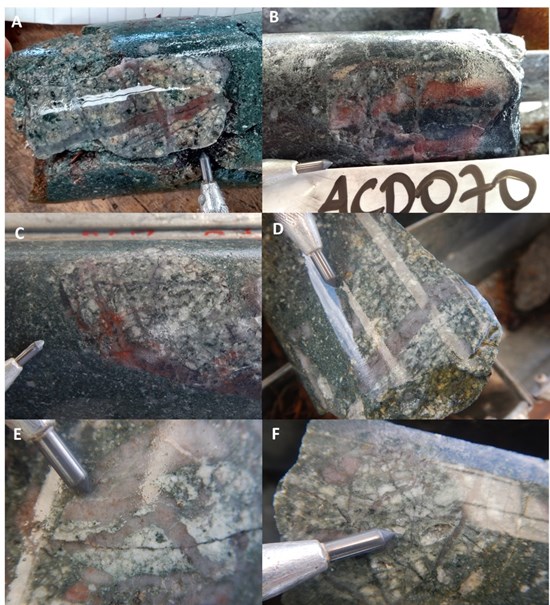 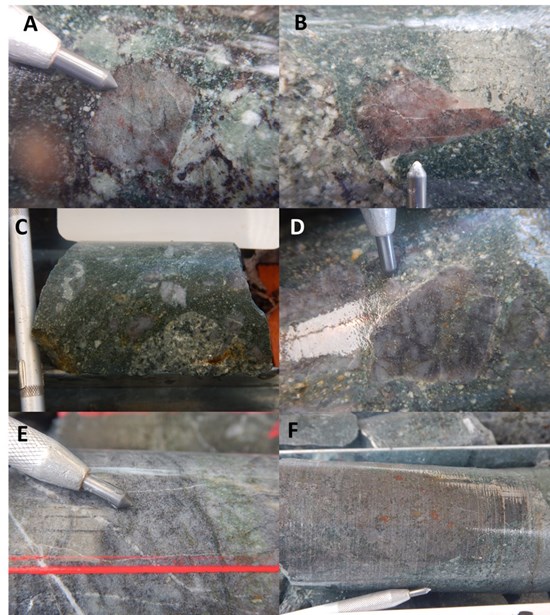 Unidirectional Solidification Textures ("USTs") contained within the porphyry clasts are often seen in porphyry deposits at the top or "apical" portions of the intrusive stock in association with potassic alteration and Type A veining.

Given the potential impact of these recent observations, the Company has decided to delay the Alacran Preliminary Economic Assessment until the area of interest has been explored with drilling.

The scientific and technical information in this release has been reviewed and verified by Dale A. Sketchley, M.Sc., P.Geo., a Qualified Person for the purpose of National Instrument 43-101. Mr. Sketchley is a consultant to Cordoba Minerals and is considered independent under National Instrument 43-101. Mr. Sketchley is a geologist with over 40 years in the mineral exploration, mining and consulting industry. He is a Member of the Association of Professional Engineers and Geoscientists of British Columbia (APEGBC) and the Canadian Institute of Mining and Metallurgy (CIMM).

An independent, National Instrument 43-101 compliant, technical report for the Alacran Deposit, dated April 10, 2018 and prepared by Amec Foster Wheeler Americas Limited, is available under the Cordoba's SEDAR profile at www.sedar.com and on Cordoba's website at www.cordobaminerals.com.

Eugene Schmidt was instrumental in identifying new prospective targets at Alacran and in the greater San Matias District. Having completed this objective, he will transition back to a consultant role to advise the Company during exploration and drilling at Alacran as well as at Perseverance in Arizona, USA. Although no longer acting as Vice President, Exploration, he will continue to generate new ideas and potential projects for Cordoba.

Cordoba Minerals Corp. is a Toronto-based mineral exploration company focused on the exploration and acquisition of copper and gold projects. Cordoba is currently focused on its 100%-owned San Matias Copper-Gold Project, which includes the advanced-stage Alacran Deposit, located in the Department of Cordoba, Colombia. Cordoba has also entered into a joint venture and earn-in agreement to explore the Perseverance coppery porphyry project located in Arizona, USA. For further information, please visit www.cordobaminerals.com.

ON BEHALF OF THE COMPANY

Neither the TSX Venture Exchange nor the Investment Industry Regulatory Organization of Canada accepts responsibility for the adequacy or accuracy of this release.

This news release includes "forward-looking statements" and "forward-looking information" within the meaning of Canadian securities legislation. All statements included in this news release, other than statements of historical fact, are forward-looking statements including, without limitation, (i) that exploration has identified a potential source of mineralization for the Alacran Deposit; (ii) that an area located to the west of Alacran could represent a potential copper porphyry target; and (iii) that exploration activities may lead to new or large-scale discovery at Alacran. Forward-looking statements include predictions, projections and forecasts and are often, but not always, identified by the use of words such as "anticipate", "believe", "plan", "estimate", "expect", "potential", "target", "budget" and "intend" and statements that an event or result "may", "will", "should", "could" or "might" occur or be achieved and other similar expressions and includes the negatives thereof.

Forward-looking statements are based on a number of assumptions and estimates that, while considered reasonable by management based on the business and markets in which Cordoba operates, are inherently subject to significant operational, economic, and competitive uncertainties, risks and contingencies. There can be no assurance that such statements will prove to be accurate and actual results, and future events could differ materially from those anticipated in such statements. Important factors that could cause actual results to differ materially from the Company's expectations include actual exploration results, interpretation of metallurgical characteristics of the mineralization, changes in project parameters as plans continue to be refined, future commodity prices, availability of capital and financing on acceptable terms, general economic, market or business conditions, uninsured risks, regulatory changes, delays or inability to receive required approvals, and other exploration or other risks detailed herein and from time to time in the filings made by the Company with securities regulators, including those described under the heading "Risks and Uncertainties" in the Company's most recently filed MD&A. The Company does not undertake to update or revise any forward-looking statements, except in accordance with applicable law.

5 Factors to Consider before You Start CFD Trading Business

10 Important Points To Consider Before Renting A Self Storage