How to Set a Deadline and Achieve You…
The Spring of Khosrow Carpet
What is Conversion Tracking? How to S…
مميزات وعيوب تطبيق tomtom gps لأجهزة …
A Comparison of the Environmental Imp…

Only recently folded into the Space Force, a Space and Missile Systems Center (SMC) press release discussed the decision in greater detail, confirming that the center itself has chosen to delay SpaceX’s GPS III SV03 launch. Instead of a technical fault or issues processing the rocket or satellite, SMC is delaying the launch to “minimize the potential of COVID-19 exposure to the launch crew and early-orbit operators,” possibly referring to any combination of Lockheed Martin, Raytheon, or SpaceX employees.

This is now the second SpaceX launch to be delayed by the coronavirus pandemic after the Argentinian government’s strict response force its space agency (CONAE) to postpone its SAOCOM 1B Earth observation satellite launch. Viewed a different way, SpaceX’s next two commercial (non-Starlink) launches have each been delayed a month or two. However, it’s reasonable to assume that those delays are more or less indefinite, given that they both appear to be contingent upon the end of the United States’ coronavirus outbreak.

The Space and Missile Systems Center confirms a 2-month delay in the launch of the next GPS satellite — which was set for launch from Florida on a SpaceX Falcon 9 rocket on April 29 — to "minimize the potential of COVID-19 exposure to the launch crew and early-orbit operators.” 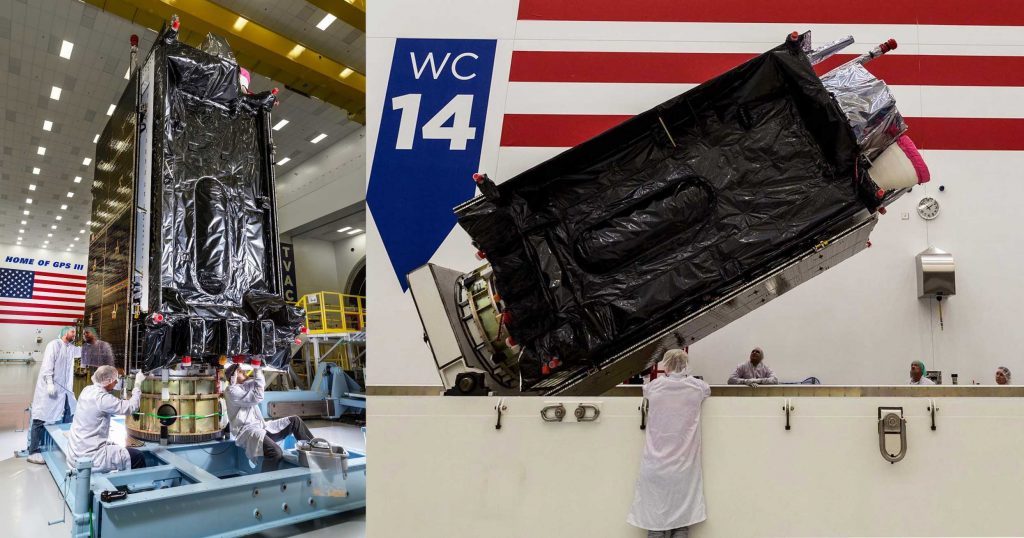 SpaceX’s second GPS III satellite launch has been delayed by the US Space Force due to coronavirus concerns. (Lockheed Martin)

As a result, it’s looking increasingly likely that SpaceX’s next two or three Falcon 9 launches will all be internal Starlink missions, carrying several more batches of 60 communications satellites into orbit. SpaceX’s next Starlink mission – the seventh overall – is expected to launch no earlier than April, likely in the second half of the month. Thanks to SpaceX’s highly successful Starlink factory, at least another two additional batches of satellites are ready or nearly ready for launch, waiting their turn for a Falcon 9 rocket.

SpaceX’s fleet of flight-proven rockets has rapidly diminished after two boosters failed their landing attempts in February and March 2020, making it substantially harder to support an aggressive Starlink launch cadence. Excluding two Falcon Heavy Block 5 side boosters flown in April and June 2019, SpaceX’s fleet is now down to three booster: B1049, B1051, and B1059.

Thankfully, although production slowed down as SpaceX’s Hawthorne factory focus shifted more towards payload fairings and upper stages, the company has continued to build Falcon 9 boosters. Currently, boosters B1058 and B1060 have passed their McGregor, Texas acceptance tests and are awaiting their first launches in Cape Canaveral, Florida. B1058 should become the first SpaceX rocket ever to launch astronauts as early as late May 2020, while B1060 – assigned to launch the GPS III SV03 navigation satellite will now have to wait until June 30th at the earliest for its debut.

Assuming everything goes as planned, both B1058 and B1060 will land shortly after their respective NET May and NET June launches, potentially freeing the boosters up for refurbishment and reflight on future SpaceX missions – Starlink included.

Unfortunately, future launch delays are extremely likely due to the fact that the United States remains in what appears to be the early stages of the coronavirus pandemic. SpaceX itself already has six confirmed COVID-19 cases at its Hawthorne, California factory and headquarters, a number that could easily continue to grow without strict and immediate interventions. For now, though, the company appears set on forging ahead in this time of crisis.