Just minutes before SpaceX began fueling Falcon Heavy for its commercial launch debut, NASA announced that the company had won a contract for its Double Asteroid Redirection Test (DART) mission, to be launched by Falcon 9 for the low cost of $69M.

Designed to cost less than $250M total, the DART mission will aim to be as light and fast as possible, using a dedicated Falcon 9 to send the ~600 kg (~1300 lb) spacecraft and its Italian companion cubesat on an ~11 million kilometer (~7M mi) journey to the binary asteroid Didymos. The ultimate purpose of DART is to effectively prove out both technologies and physics that could be used in the future to defend Earth from asteroids known to be on a collision course.

It's official! @NASA has picked the @SpaceX Falcon 9 rocket as the launch vehicle for #DART, the Double Asteroid Redirection Test.

If all goes as planned during DART’s imminent design review milestones and hardware integration, Falcon 9 could launch the spacecraft towards the Didymos asteroid system in June 2021 for an October 2022 arrival. That “arrival” would involve DART impacting Didymos-B – the smaller of the pair at 163 m (535 ft) across – at a relative velocity of more than 6 km/s (3.7 mi/s). Nicknamed Didymoon, Didymos-B effectively orbits Didymos-A. At that speed, the ~600 kg probe will create an impact with the equivalent explosive force of nearly two and a half tons of TNT, the purpose of which is to determine just how much the sheer kinetic energy of impact can modify a small body’s orbit around the main asteroid.

Estimates from the spacecraft’s mission managers expect Didymoon’s orbit to be shifted by about 1% as measured by the time it takes to orbit Didymos-A, from ~11.9 hours to ~11.8 to 12.0 hours. This is a very small change but one that should – in theory – be easily measurable by telescopes on Earth, despite the fact that Didymoon has been estimated to have a mass of approximately 3.5 million metric tons (7.6 billion pounds), approximately seven million times heavier than DART. In short, NASA is going to functionally bomb an asteroid moon to see if humans might be able to use kinetic impactors to gently ‘boop’ threatening space objects off of the offending trajectory years or even decades in advance.

Despite the inherently destructive, single-use nature that DART’s impactor status bestows, current plans thankfully include an Italian cubesat known as LICIACube. The small copassenger will deploy two days before impact to fully exploit the scientific value of DART’s demise with high-quality photos of the event and aftermath. LICIACube will be traveling the same speed and thus won’t be able to enter orbit around the asteroid system, but a European Space Agency (ESA) mission known as Hera plans to do just that in the mid-2020s to better characterize Didymos and the crater (hopefully) made by DART.

Aside from the mission itself, DART serves as a technology demonstration platform for NASA. It will mark the first in-space use of the NASA-built NEXT-C ion thruster and , as well as the first standalone use of Roll-Out Solar Array (ROSA) deployment mechanism (shown above being tested on the ISS). Even more intriguing is a proposed transformational solar array planned at one point for DART, a flexible combination of advanced solar cells (~33% efficient) and mirror concentrators that could feed a spacecraft five times as much power for a given solar array area and distance from the sun. It’s unclear whether this will make it into DART’s final design but it still appears to be on the table as of January 2019. According to the contracted manufacturer, DART’s solar array will produce ~6.6 kW, while rough estimates suggest that the solar array will have an area of 16 m^2 (170 ft^2). Relative to the simplicity of the deployment mechanism and small size of DART (~600 kg total), this is an incredible amount of accessible power. 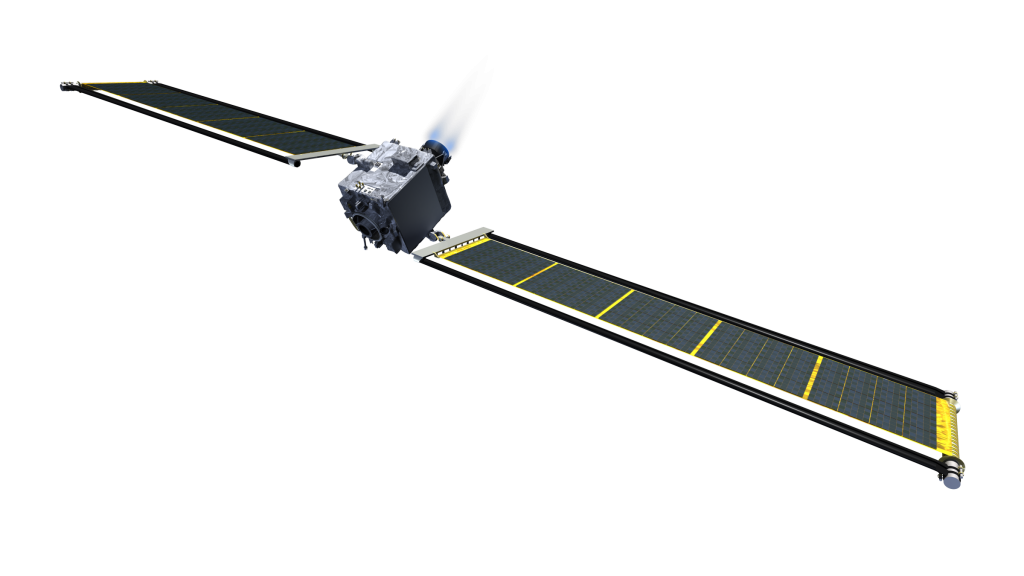 The most recent render of the NASA/APL DART spacecraft. (NASA/APL)

Falcon 9 B1045 rolls out to LC-40 ahead of SpaceX’s first dedicated NASA payload, the TESS exoplanet observatory. (SpaceX)

For NASA’s SpaceX launch contract, the agency will pay just $69M, barely 10% above Falcon 9’s bare-minimum list price of $62M. It’s safe to assume that the timing of the contract award – days after SpaceX abruptly dropped an official protest of ULA winning a ~$150M NASA contract – might not be . Regardless, SpaceX’s decision to bid so low for a NASA launch does lend some serious credence to the company’s protest that ULA’s contract for the mission – NASA’s LUCY asteroid explorer – was “vastly more [expensive]” than the bid SpaceX submitted.

Weighing just ~600 kg (~1300 lb) wet, DART could end up launching with additional copassengers on Falcon 9, although there is a precedent set by NASA’s ~360 kg TESS and Taiwan’s -5 for SpaceX giving tiny spacecraft dedicated launches. Additionally, it’s possible that DART will launch on a flight-proven Falcon 9 Block 5 rocket, given the likelihood that NASA will have certified flight-proven SpaceX vehicles for almost any launch by 2021.