In their Hype Cycle for Cloud Security 2020 report, Gartner predicted that cloud-based automation testing was one of the cloud technologies that would become widely adopted within the next two years.

Equipment for IVF and Andrology Lab
Burrow Has The Perfect Pillow For Eve…
Mental Slot Review and Playtest (NoLi…
NCAA COVID Protocols: Can’t Play? For…
How to Price Your Craft & Design (par…

Gartner believes that this technology will deliver a high level of benefits to organizations that adopt it. The pandemic has only accelerated this shift, as more and more businesses regard the cloud as a necessity rather than a luxury.

The primary benefit most testing companies have from using cloud-based testing services is that they don’t have to focus on investing in the hardware to deliver the software. This saves a lot of capital that would have otherwise been used to create an in-house testing department.

These cloud-based automation testing tools also help engineering and DevOps teams construct various test environments with multiple configurations and data, or even potentially create a fully automated release process when used in conjunction with tools such as Heroku or Docker. Utilizing tools like this creates more opportunities for collaboration among product development teams.

Regardless of the scale and type of testing a company performs, cloud-based automated testing is already widely considered as the future for the industry. In fact, worldwide end-user spending on public cloud services is forecast to grow 18.4 percent in 2021.

Whether it’s mobile application testing companies or enterprise software testing ones, the unanimity in each sphere is apparent.

And why not? The benefits these businesses reap are manyfold. Cloud-based automated testing provides architectural flexibility, a plethora of options in resources, and most importantly, complete remote accessibility. Not to mention the most obvious benefit of cloud-based testing: it’s easily scalable, which makes future-proofing a worry of the past for testing companies.

What are the advantages of cloud-based automated testing? 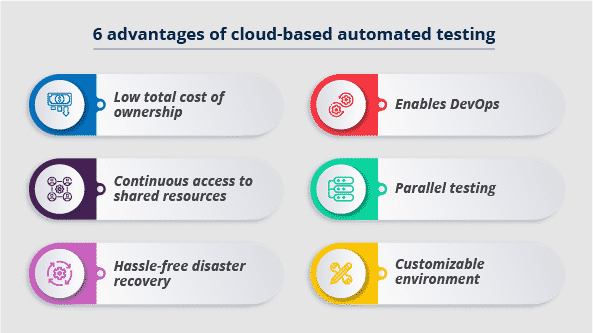 Cloud-based automation tools give companies the benefit of a significantly lower total cost of ownership compared to their traditional counterparts.

This is due to the fact that cloud-based testing tools do not require heavy hardware infrastructure to run or costly licensing fees.

These tools also provide room for the prospect of high reusability of the components that are used in test scenarios. Your testing team can use the same components to verify how software or applications are run on various devices. These range from desktop, mobile or tablet applications.

Cloud-based automation tools give their users access to resources at any time of the day without device or time limitations. This makes being proactive around the clock a possibility for most software testing firms as it isn’t uncommon for these businesses to have resources in various locations.

This is especially key for businesses employing work-from-home measures during the COVID-19 pandemic. Having continuous access also means your QA teams can locate bugs and defects at the early stages of the software development lifecycle (SDLC). Since cloud-based solutions allow for greater test coverage in shorter time spans, QA teams in different locations can access resources whenever they like. All that’s required is for the team to log in to the cloud server and begin testing.

Building and maintaining a physical backup recovery solution can often be costly and requires tons of hardware, depending on the scale of operations. And even then, hardware malfunctions can often cause complete data loss. Cloud-based software testing may be a simple and surefire fix for this issue with data retrieval being one click away. This is often because all the info on the cloud is stored in multiple servers across the world.

In the event of a server breakdown, other servers can pull the load and keep the work going, and most significantly, keep your data intact.

It looks like cloud solutions are the natural best step to evolving future business processes. Cloud solutions also can better prepare your business for any audits as past data is definitely accessible.

It’s safe to mention that DevOps and cloud-based testing tools are a perfect recipe. The cloud offers the following DevOps advantages: 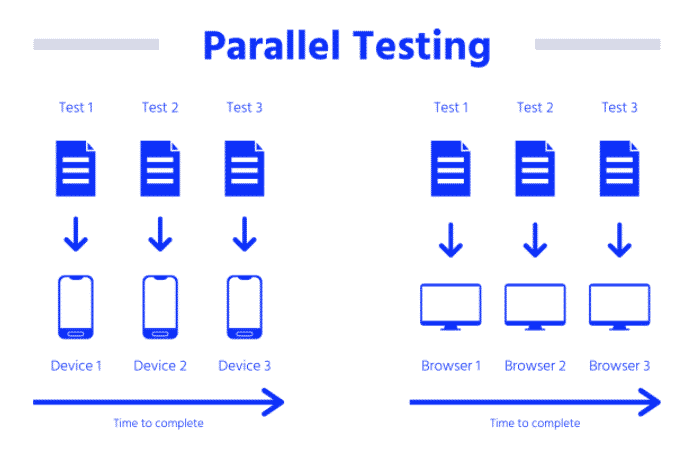 During a perfect setting, software test targets involve various browsers, OS, platforms, and devices. Once you employ the cloud, you’ll perform parallel tests altogether of these environments instead of following a scheduled progression.

This enables software testing companies to guard their testing time, making cloud testing useful for agile and CI methodologies. Besides this, the cloud allows companies to scale both mobile and web platforms’ elasticity and coverage. Plus, with the right cloud vendor, you get the capacity available and tools required to simulate different devices, users, requests, and more.

With the assistance of cloud-based software testing, it’s relatively painless for businesses to emulate the “end-user” environment. They will also customize it and remain according to their usage. Teams can easily conduct performance and testing scenarios in multiple combinations and permutations, saving time, and overall expense. Creating a user-centric environment requires a much bigger investment in an offline grid, which isn’t possible for every firm. Furthermore, hosting and managing tests eats up a significant portion of the investment. Cloud-based testing can help lower costs and navigate around these limitations at the same time.

The pandemic has forced a number of businesses to enable cloud-based automated testing environments and while we think it is the future, some might point to its insecure nature as being a stumbling block.

And you wouldn’t be wrong to have at least a few of these as perfectly warranted reasons. As a subscriber to a cloud-based testing application, you sign off on your data and information to an outside party.

While this makes your data more vulnerable to breaches and hacks, most cloud-based tools are well equipped to mitigate such issues.

For your peace of mind, choosing a cloud-based testing service that provides 24/7 customer support with a ticket escalation system can be just enough to sideline security concerns. All in all, cloud-based testing tools are here to stay and are an integral part of the industry’s future.

The post Six Advantages of Cloud Based Automated Testing appeared first on Kualitatem.