AROUND THE WORLD for Choir 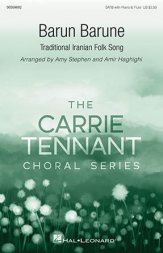 Barun Barune arr. Amy Stephen & Amir Haghighi, SATB with piano and flute
Composed for the Vancouver Youth Choir and director Carrie Tennant, this Iranian Folk Song from the Kurdistan region draws on the diverse ethnic population of their rich musical heritage. The original Farsi language (also known as Persian) is used throughout, and an easy-to-understand pronunciation guide is included in the octavo with a link to a spoken version offered as a supplement.

Hashivenu arr. Michael Ryan, 3-part mixed with piano
The plaintive, soul-searching melody of this beloved Israeli folk Song is beautifully suited to developing voices. Voices begin in unison and ease into simple harmony before developing into a three-part round and concluding with a gentle, ethereal coda. A delicate, independent Piano part helps create an ever-flowing feel. Lovely!

Marie Madeleine arr. Jeanette Gallant, SATB a cappella with body percussion and spoons
Gallant’s take on this Acadian folksong is lively and engaging, featuring the quintessential elements of the tradition: podorythmie (seated foot-tapping), diddlage (mouth music), and the spoons. With playful vocal slides and energetic rhythmic motifs, this arrangement offers a modern twist on this well-loved melody from the French-Canadian oral tradition. An English (non-singing) translation is included in the leaflet, while a studio recording, pronunciation guides, and an instructional video on playing techniques are accessible through the companion website.

Malakatumba by Josu Elberdin, SAB a cappella with body percussion
Born as a game, this clever piece uses imitating sounds and nonsense vocables to form words with no real meaning. It begins with four solo voices in canon over a humming harmonic accompaniment by the choir. Then it opens into the main body of the song that is quickly built by having each voice part on its own ostinato. Add the body percussion and this will be a real showstopper!

Scarborough Fair arr. Matthew Brown, SAB with piano
With musical nods to medieval counterpoint, sonorities, and dissonances, this fresh take on the beloved English ballad is especially well-suited for choirs with smaller tenor/bass sections. The piano accompaniment offers something new, different, and supportive.

TaReKiTa by Reena Esmail, SATB a cappella
“TaReKiTa” is a refreshing concert piece that effortlessly blends the Indian and Western classical styles. The composer’s scats are combined with a fast triple meter, vocal slides, and captivating melodies built on the Jog raga. A pronunciation guide is included.

Dors, Dors, Petit Bebe arr. Victor C. Johnson, SSA with piano and optional violin
With a delicate melody, evocative harmonies, and an expressive accompaniment, this is a work that will showcase the musicality of your treble choir. Each verse is sung in Cajun French, which is easily learned, while the original middle section is in English. An optional violin part enhances the gentle mood. A pronunciation guide and translation are included.

Shule Aroon arr. Ruth Elaine Schram, 3-part mixed with piano and optional violin
Create an authentic Celtic experience with your choir when you perform this arrangement of the 18th-century Irish folk song. A mixture of thoughtful rubato and energetic rhythms, a Gaelic chorus – written phonetically throughout – and an optional violin obbligato all contribute to the lively Celtic flavor and flair.

Wangolo arr. Ruth Morris Gray, 3-part mixed with piano and optional percussion (opt. a cappella)
Some history: this song comes from Haiti, but actually refers to the first King of Angola, Ngolo Kiluanje, who was revered as a great king. The Creole word for “king” (“wa”) plus the king’s name (“Ngolo”) became “Wangolo.” It’s an authentic folk song recalling the peace and prosperity the Angolan people enjoyed before colonization. This rhythmic rendition, which may be performed without piano if desired, includes optional body percussion, suggested parts for djembe and other instruments, optional solos in the call and response section, plus a final descant that tops off the triadic parallel harmonies. Check out the free online ChoreoTrax video for some creative riser choreography.

The Wellerman arr. Roger Emerson, TTBB a cappella
If you were anywhere near the TikTok app in 2020, you undoubtedly heard this 1800s-era New Zealand sea shanty, possibly sung in a thick, Scottish brogue, perhaps accompanied by a dance. We get it – you want to sing this song, and Roger Emerson has your choir covered! 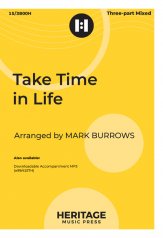 Take Time in Life arr. Mark Burrows, 3-part mixed a cappella with percussion
“Take time in life, better take time in life, ’cause you got far way to go.” This authentic Liberian folk tune presents a positive message for living in this spirited piece. The text is in English, as that is the official language of Liberia, but the style and groove are solidly West African. Add the percussion to the a cappella setting for a dynamic performance!

Dide ta Deo arr. Mark Weston, 3-part mixed with piano and percussion
Add excitement to your concert program with this Mark Weston adaptation of a traditional Nigerian folk song that tells the story of a safe return home. The percussion parts illuminate the driving beat and spirit-filled emotion, and a pronunciation guide and translation are included.

Üsküdar arr. Mark Burrows, 2-part with piano and optional oboe, finger cymbals, tambourine & dumbek
This energetic setting of the Turkish folk song utilizes repetition so that the short Turkish text, once learned, becomes easier with each repetition of the chorus. The tempo increases as the arrangement builds, creating a whirling and exciting effect. Incorporate the optional oboe, finger cymbals, tambourine, and dumbek for added authenticity. A pronunciation guide and translation are provided.

Shop Stanton’s for all your sheet music needs!

About the Authors:
Jen Sper is a Choral Music Specialist here at Stanton’s Sheet Music. A native of Cincinnati, she holds a Bachelor of Music Education degree from Baldwin Wallace College (now University) Conservatory of Music, and taught 7-12 choir, music theory, class piano, and drama in Southern Ohio before joining the Stanton’s team in 2006. An active choral singer and accompanist throughout the Central Ohio area, Jen can also often be found exploring the exciting restaurant, brewery, and theater scenes in Columbus, wandering through the local metro parks, visiting family around the Great Lakes, or at home with her very friendly cat.

Lora Moore joined the Stanton’s choral staff in July 2018. A former middle school and high school director of 32 years and a former church choir director of 20 years, she holds a Bachelor of Arts in Choral Music from Capital University and a Master’s of Arts in Choral Music from The Ohio State University. During the off hours, Lora enjoys scouting out new day trips in Ohio to balance what her budget allows for her frequent trips to New York City to visit family and take in a Broadway show or two!

AROUND THE WORLD for Choir