Sulfur or sulphur (pronounced /ˈsʌlfər/, see spelling below) is the chemical element that has the atomic number 16. It is denoted with the symbol S. It is an abundant, multivalent non-metal. Sulfur in its native form is a yellow crystalline solid. In nature, it can be found as the pure element and as sulfide and sulfate minerals. It is an essential element for life and is found in two amino acids, cysteine and methionine. Its commercial uses are primarily in fertilizers, but it is also widely used in black gunpowder, matches, insecticides and fungicides. Elemental sulfur crystals are commonly sought after by mineral collectors for their brightly colored polyhedron shapes. In nonscientific context it can also be referred to as brimstone.

Sulfur (Sanskrit, sulvari; Latin sulfur or sulpur) was known in ancient times and is referred to in the Torah (Genesis).

English translations of the Bible commonly referred to burning sulfur as "brimstone", giving rise to the name of 'fire and brimstone' sermons, in which listeners are reminded of the fate of eternal damnation that await the unbelieving and unrepentant. It is from this part of the Bible that Hell is implied to "smell of sulfur", although sulfur, in itself, is in fact odorless. The "smell of sulfur" usually refers to either the odor of hydrogen sulfide, e.g. from rotten egg, or of burning sulfur, which produces sulfur dioxide, the smell associated with burnt matches. The smell emanating from raw sulfur originates from a slow oxidation in the presence of air. Hydrogen sulfide is the principal odor of untreated sewage and is one of several unpleasant smelling sulfur-containing components of flatulence (along with sulfur-containing mercaptans).

A natural form of sulfur known as shiliuhuang was known in China since the 6th century BC and found in Hanzhong.[2] By the 3rd century, the Chinese discovered that sulfur could be extracted from pyrite.[2] Chinese Daoists were interested in sulfur's flammability and its reactivity with certain metals, yet its earliest practical uses were found in traditional Chinese medicine.[2] A Song Dynasty military treatise of 1044 AD described different formulas for Chinese black powder, which is a mixture of potassium nitrate (KNO3), charcoal, and sulfur. Early alchemists gave sulfur its own alchemical symbol which was a triangle at the top of a cross.

In 1777 Antoine Lavoisier helped convince the scientific community that sulfur was an element and not a compound. In 1867, sulfur was discovered in underground deposits in Louisiana and Texas. The overlying layer of earth was quicksand, prohibiting ordinary mining operations, therefore the Frasch process was developed.

The element has traditionally been spelled sulphur in the United Kingdom (since the 14th Century)[3], most of the Commonwealth including India, Malaysia, South Africa, and Hong Kong, along with the rest of the Caribbean and Ireland, but sulfur in the United States, while both spellings are used in Australia, New Zealand, Canada, and the Philippines. IUPAC adopted the spelling “sulfur” in 1990, as did the Royal Society of Chemistry Nomenclature Committee in 1992[4] and the Qualifications and Curriculum Authority for England and Wales recommended its use in 2000.[5]

In Latin, the word is variously written sulpur, sulphur, and sulfur (the Oxford Latin Dictionary lists the spellings in this order). It is an original Latin name and not a Classical Greek loan, so the ph variant does not denote the Greek letter φ. Sulfur in Greek is thion (θείον), whence comes the prefix thio-. The simplification of the Latin word's p or ph to an f appears to have taken place towards the end of the classical period, with the f spelling becoming dominant in the medieval period.[6][7] 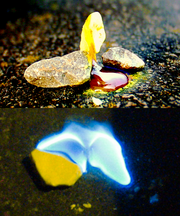 Sulfur melts to a blood-red liquid. When burned, it emits a blue flame.

At room temperature, sulfur is a soft, bright-yellow solid. Elemental sulfur has only a faint odor, similar to that of matches. The odor associated with rotten eggs is due to hydrogen sulfide (H2S) and organic sulfur compounds rather than elemental sulfur. Sulfur burns with a blue flame that emits sulfur dioxide, notable for its peculiar suffocating odor due to dissolving in the mucosa to form dilute sulfurous acid. Sulfur itself is insoluble in water, but soluble in carbon disulfide — and to a lesser extent in other non-polar organic solvents such as benzene and toluene. Common oxidation states of sulfur include −2, +2, +4 and +6. Sulfur forms stable compounds with all elements except the noble gases. Sulfur in the solid state ordinarily exists as cyclic crown-shaped S8 molecules.

The crystallography of sulfur is complex. Depending on the specific conditions, the sulfur allotropes form several distinct crystal structures, with rhombic and monoclinic S8 best known.

A noteworthy property of sulfur is that its viscosity in its molten state, unlike most other liquids, increases above temperatures of 200 °C due to the formation of polymers. The molten sulfur assumes a dark red color above this temperature. At higher temperatures, however, the viscosity is decreased as depolymerization occurs.

Amorphous or "plastic" sulfur can be produced through the rapid cooling of molten sulfur. X-ray crystallography studies show that the amorphous form may have a helical structure with eight atoms per turn. This form is metastable at room temperature and gradually reverts back to crystalline form. This process happens within a matter of hours to days but can be rapidly catalyzed.

The structure of the cyclooctasulfur molecule, S8.
Main article: Allotropes of sulfur

Sulfur forms more than 30 solid allotropes, more than any other element.[8] Besides S8, several other rings are known.[9] Removing one atom from the crown gives S7, which is more deeply yellow than S8. HPLC analysis of "elemental sulfur" reveals an equilibrium mixture of mainly S8, but also S7 and small amounts of S6.[10] Larger rings have been prepared, including S12 and S18.[11][12] By contrast, sulfur's lighter neighbor oxygen only exists in two states of allotropic significance: O2 and O3. Selenium, the heavier analogue of sulfur, can form rings but is more often found as a polymer chain.

When sulfide minerals are precipitated, isotopic equilibration among solids and liquid may cause small differences in the δS-34 values of co-genetic minerals. The differences between minerals can be used to estimate the temperature of equilibration. The δC-13 and δS-34 of coexisting carbonates and sulfides can be used to determine the pH and oxygen fugacity of the ore-bearing fluid during ore formation.

In most forest ecosystems, sulfate is derived mostly from the atmosphere; weathering of ore minerals and evaporites also contribute some sulfur. Sulfur with a distinctive isotopic composition has been used to identify pollution sources, and enriched sulfur has been added as a tracer in hydrologic studies. Differences in the natural abundances can also be used in systems where there is sufficient variation in the 34S of ecosystem components. Rocky Mountain lakes thought to be dominated by atmospheric sources of sulfate have been found to have different δS-34 values from lakes believed to be dominated by watershed sources of sulfate.

Elemental sulfur can be found near hot springs and volcanic regions in many parts of the world, especially along the Pacific Ring of Fire. Such volcanic deposits are currently mined in Indonesia, Chile, and Japan. Sicily is also famous for its sulfur mines. Sulfur deposits are polycrystalline, and the largest documented single crystal measured 22x16x11 cm3.[13][14]

Significant deposits of elemental sulfur also exist in salt domes along the coast of the Gulf of Mexico, and in evaporites in eastern Europe and western Asia. The sulfur in these deposits is believed to come from the action of anaerobic bacteria on sulfate minerals, especially gypsum, although apparently native sulfur may be produced by geological processes alone, without the aid of living organisms (see below). However, fossil-based sulfur deposits from salt domes are the basis for commercial production in the United States, Poland, Russia, Turkmenistan, and Ukraine.

Sulfur recovered from hydrocarbons in Alberta, stockpiled for shipment at Vancouver, B.C.

Sulfur production through hydrodesulfurization of oil, gas, and the Athabasca Oil Sands has produced a surplus — huge stockpiles of sulfur now exist throughout Alberta, Canada.

The distinctive colors of Jupiter's volcanic moon, Io, are from various forms of molten, solid and gaseous sulfur. There is also a dark area near the Lunar crater Aristarchus that may be a sulfur deposit.

Sulfur is extracted by mainly two processes: the Sicilian process and the Frasch process. The Sicilian process, which was first used in Sicily, was used in ancient times to get sulfur from rocks present in volcanic regions. In this process, the sulfur deposits are piled and stacked in brick kilns built on sloping hillsides, and with airspaces between them. Then powdered sulfur is put on top of the sulfur deposit and ignited. As the sulfur burns, the heat melts the sulfur deposits, causing the molten sulfur to flow down the sloping hillside. The molten sulfur can then be collected in wooden buckets.

The second process used to obtain sulfur is the Frasch process. In this method, three concentric pipes are used: the outermost pipe contains superheated water, which melts the sulfur, and the innermost pipe is filled with hot compressed air, which serves to create foam and pressure. The resulting sulfur foam is then expelled through the middle pipe.[16]

The Frasch process produces sulfur with a 99.5% purity content, and which needs no further purification. The sulfur produced by the Sicilian process must be purified by distillation.

The Claus process is used to extract elemental sulfur from hydrogen sulfide produced in hydrodesulfurization of petroleum or from natural gas.

In the biological route, hydrogen sulfide (H2S) from natural gas or refinery gas is absorbed with a slight alkaline solution in a wet scrubber. Or the sulfide is produced by biological sulfate reduction. In the subsequent process step, the dissolved sulfide is biologically converted to elemental sulfur. This sol

How To Choose Flux Core Wire?

10 Powerful Food Pairing that can help you gain Incredible Health

The smart way to preserve your tire life