In the letter to the Prime Minister, she extended the party’s support to the Union Cabinet’s decision of 30 per cent pay cut from salaries of Members of Parliament. 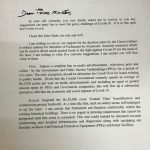 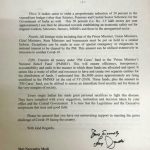 “Austerity measures which can be used to divert much needed funds to the fight against COVID-19 are the need of the hour,” she wrote. (ANI)

The post Sonia Gandhi to interact with PCC presidents on April 11 regarding relief work appeared first on NewsroomPost.