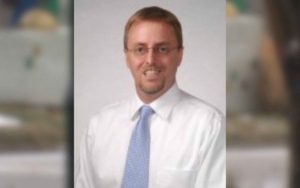 Summary: An ex-University of Michigan doctor was arrested and placed behind bars for possession of child pornography and having sex with a teenage client in his office.

When the University of Michigan was alerted that one of their doctors was being investigated by the state’s licensing body, they immediately removed Dr. Mark Hoeltzel from patients, the clinic, and their institution. Hoeltzel is accused of not only possessing child pornography but keeping a two-year sexual relationship with a teenage Patient, according to the Detroit Free Press.

Agents arrested Hoeltzel as he stepped off an airplane at Detroit Metro Airport from an out-of-state trip. The federal government accused Hoeltzel, a pediatric rheumatologist, of having a sexual relationship with the “vulnerable” patient in his clinic, giving her unnecessary pain pills, and referring to his other teenage patients as “hotties.” The criminal complaint was unsealed in the U.S. District Court on Monday.

The patient was allegedly referred to Hoeltzel when she was 17-years-old for rheumatoid arthritis. Court records also indicate that the patient had a mental health diagnosis. The state licensing authorities were investigating Hoeltzel when they learned of this relationship, alerting federal authorities and law enforcement.

During the investigation by the police, they seized a computer thumb drive from his Ann Arbor home where they found files of child pornography. There were a total of 210 images on the device, mostly of minor females with their genitals exposed. The files were created in 2008 and last accessed on May 17, 2017, according to the court records.

The investigation into the sexual relationship is ongoing so he has only been officially charged with possession of child pornography, his lawyer Raymond Cassar noted. Cassar said of the claims his client had sex with a patient, “I think there’s going to be much more uncovered about this young lady that will balance this out a little bit. It sounds to me like it was a consensual relationship and she was of age. She was 18 years old.”

The patient told authorities that the relationship started when she was 18. Hoeltzel texted her and told her to make an appointment with him. When she arrived for her first appointment with him, she claims he “grabbed her from behind, pulled her butt into his groin and rubbed his erect penis on her.” From that point on, she would visit the clinic every 3-4 weeks instead an appropriate checkup period of three months. Hoetzel, who is married with children, would visit her apartment to have sex with her there.

During their two-year relationship, he would often only have sex with her at his office, not treating her condition. He would then prescribe pain medications that “were beyond and outside of recommendations.” Hoeltzel would also discuss his other female patients with her, ranging in age from 12 to 15, referring to them as “hot.”

When the State of Michigan Licensing and Regulatory Affairs alerted the University of Michigan about their investigation into Hoeltzel, they immediately fired him and “retained an experienced national law firm with expertise in this area to investigate this matter.” The university is cooperating fully with the authorities.

Marschall Runge, CEO of Michigan Medicine and U-M’s executive vice president of Medical Affairs, said, “These are very disturbing and serious allegations, and we have reached out to our patients to inform them of concerns related to Dr. Hoeltzel, offer resources and provide them with a way to report any concerns.”

Runge continued, “We took immediate steps to protect our patients by removing him from patient care duties the day we were alerted. We did not allow him to return to work and he is no longer a Michigan Medicine employee. We also immediately reported him to law enforcement and have been fully cooperative with the investigations that have resulted in these changes. We continue to cooperate fully with law enforcement. Any behaviors we discover that risk the safety of our patients or employees, or violate state or federal law, will be reviewed and addressed with the appropriate follow up … We must and will continue to do everything possible to protect the patients who entrust Michigan Medicine with their care. We also urge everyone to report any instances of potential misconduct that occur.”

Do you think doctors who have relations with their patients should lose their license permanently? Share your thoughts with us in the comments below.

To learn more about doctors accused of sexual misconduct, read these articles: