La traviata at the Royal Opera House: a period masterpiece

The current La traviata at the Royal Opera House premiered in 1994 and almost immediately established itself as a modern classic. It succeeded a highly successful production by Luchino Visconti and John Copley, which had run for 27 years and had featured legendary sopranos, including Mirella Freni, Joan Sutherland, Montserrat Caballé, and Kiri Te Kanawa. To follow Visconti was a hard act, but the 1994 Royal Opera House La traviata did just that and with considerable panache. Its success was due in no small part to a stunning 29-year-old Angela Gheorghiu. By the time she undertook the demanding role of Violetta she had already sung Mimi in La Bohème and was known to be a promising talent. She brought to the part of Violetta a fragile beauty that turned to animated magic the moment she sang. The producer, Richard Eyre, at the time the director of the National Theatre, was impressed by her instinctive ability to act and sing with her whole body. While her lyrical soprano voice was perfect for the part, she grew into Violetta’s vulnerable personality with every move.

The night of the Royal Opera House premiere, 25 November 1994, caused a sensation. When controllers at the BBC heard of the stunning spectacle at Covent Garden, they famously cleared the schedules of BBC Two for a live broadcast. It was this event that propelled the opera, its star, and the production to international fame overnight. The camera could not get enough of Gheorghiu’s Violetta and homed in on her time and again. What the close-ups brought out above all was the sheer effortlessness of her performance, the grace and ease of her movements, the control of her voice in this most challenging of all soprano roles, and her almost tangible delight in singing. The conductor was the 82-year-old Georg Solti. He had never before taken on La traviata. At an early stage during rehearsals he worked through the score with Gheorghiu on the piano in his home. When they had finished he stepped outside and cried.

No other opera in the repertoire may have quite the power to move of La traviata. The Eyre-Solti 1994 production recognized that and ran with it. It is one of the reasons why two decades on it towers above most contemporary productions. Violetta may be a courtesan but she is also a Mary Magdalene turned into a Madonna of the boulevard. Twisting this truly grand opera into a gritty minimalist show, a currently fashionable approach, to underline the sordid underbelly of Violetta’ society, is to miss the point. The Royal Opera House’s La traviata is as luscious as it is delicate and subtle. Set pieces – the opening scene of the party around a champagne fountain, or the gypsy and matador choruses – reflect the sumptuous indulgence of the Paris of the 1840s to excellent effect. At the same time Violetta’s almost haughty reproof to a self-righteous Germont, that his tone is inappropriate because she is in her house and he is addressing a lady (‘Donna son io, signore, ed in mia casa’), rings profoundly true in this exquisitely calibrated production. The Royal Opera House’s Violetta never loses her dignity any more than she does in Verdi’s minutely annotated music and Piave’s superb libretto. 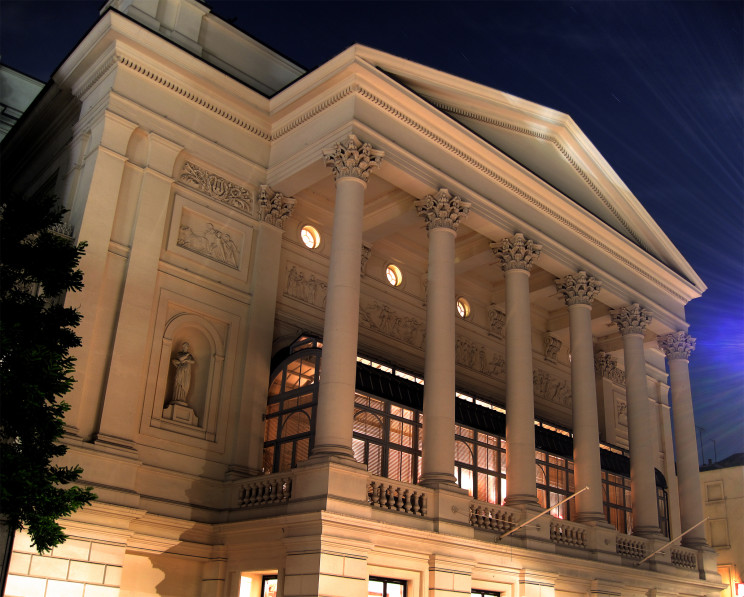 The Royal Opera House in the London district of Covent Garden. Photo by Peter Suranyi. CC BY-SA 3.0 via Wikimedia Commons.

Time and again the Eyre-Solti Traviata scores minor and major triumphs. The famous chorus that concludes Act 2 of the opera, launched by Violetta’s ‘of this my heart’ (‘di questo core’), is a visual feast. The framing of Gheorghiu’s Violetta by the rest of the cast, musically and by stage-blocking, turns this version of it into the emotional rollercoaster that it was clearly always intended to be. Verdi could not but have admired the sheer zest of the orchestration, the exquisite intelligence of Solti’s tempi, the way in which the music and Violetta blend together here. The maestro had defiantly revised this part of the opera to exalt his heroine even more. The result is one the greatest ensemble singing in all opera and the current production at the Royal Opera House does it justice.

If one had to pick out one moment in this rich production above all others, it might be Violetta’s parting from Alfredo in Act 2. It is probably the core melodic moment in the opera and the most demanding passage of all for the soprano. In Verdi’s full score she begs Alfredo to love her as she loves him, with an iridescent ‘Amami Alfredo, amami quant’io t’amo, amami, Alfredo quant’io t’amo, quant’io t’amo’. Gheorghiu’s Violetta moves towards Alfredo on ‘Amami Alfredo’, her frame straining as she launches into the Everest of the soprano voice while facing her lover and trying to embrace him without doing so. These fleeting seconds from a live performance of genius were captured perfectly by the BBC’s cameras, a lasting tribute to one of the greatest Traviatas of the last 50 years. The fact that 22 years on it continues to sell out only confirms its stature and rightful place in the public’s affection.

The post La traviata at the Royal Opera House: a period masterpiece appeared first on OUPblog.

La traviata at the Royal Opera House: a period masterpiece