It has been known for centuries that Bacteria tend to adhere to solid surfaces, forming a slimy and slippery layer known as biofilm. Bacterial biofilms are complex microbial communities protected by an extracellular matrix composed of polysaccharides, proteins, and nucleic acids. The extracellular matrix improves biofilm cohesion and its adhesion to surfaces. Within the biofilm’s three-dimensional structure, channels enable circulation of nutrients, thereby improving microbial survival. Moreover, single bacteria can often detach from biofilms, only to disperse, multiply, and ultimately colonize other areas of the environment or of their host.

How to Tell if You Have Bed Bugs?
Biodegradable Packaging: Market Savio…
Nobel Chemistry Prize 2020 Awarded to…
Sex on Your Period – Reasons to Do It
Salicylic Acid For Blackheads, Whiteh…

Bacteria attach to surfaces to gain a survival advantage compared to planktonic bacteria, which are instead floating in a liquid. For instance, bacteria in a river adhere to the underlying stones, where most nutrients accumulate. Oral bacteria adhere to tooth and gums surfaces to avoid being swallowed and killed in the gastrointestinal tract. Oral bacteria form dental plaque, a biofilm discovered for the first time in the 17th century, when Antonie van Leeuwenhoek observed it with his rudimental microscope. Van Leeuwenhoek found that dental plaque was made up of a community of “animalculi”, which were killed by the vinegar used then for washing the teeth. However, vinegar could only kill bacteria at the surface of the dental plaque, since it could not reach the deeper layers of this complex structure.

Due to the protective role of the extracellular matrix, bacteria in a biofilm are more resistant to mechanical and chemical attacks than planktonic bacteria. Even after thorough mechanical cleansing such as toothbrushing, a small amount of dental plaque always remains. Experiments show that bacteria that are protected by biofilm are up to 1,000 times less susceptible to antibiotics than planktonic bacteria. On top of that, an increasing number of bacterial strains are becoming resistant to antibiotics, posing more challenges to the treatment of infections. 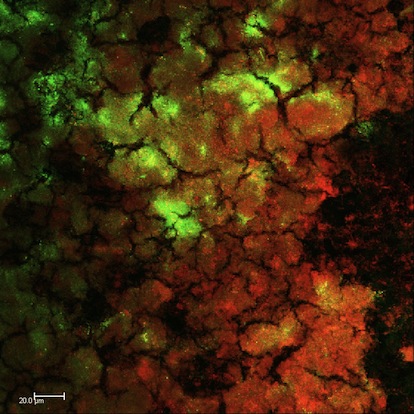 Biofilm on dentin treated with chlorhexidine and stained with Live/Dead technique. CC BY SA 3.0 via Wikimedia Commons.

Medical-device related infections are often caused by biofilms forming on biomaterials inserted or implanted in the human body, such as catheters or joint implants. Biofilms forming on catheters can provoke urinary-tract infections. Biofilms on joint implants pose a particular threat, since it is difficult to eradicate biofilms with antibiotics, often necessitating additional surgery for implant removal and replacement.

Studying biofilms is necessary in order to find innovative and more effective strategies to treat or prevent infections and bacterial persistence. For instance, researchers are trying to develop antimicrobials that can penetrate deeper into a biofilm and for which antimicrobial resistance is less likely to arise. In order to prevent infection, it is important to design surfaces that discourage bacterial adhesion and biofilm formation. However, even a small number of bacteria adhering on a surface can initiate biofilm formation.

How do bacteria know that they are on a surface?

One important approach to studying bacterial adhesion and subsequent biofilm formation is the concept of bacterial surface sensing, i.e. the mechanisms that bacteria use to become aware of their adhering state. Bacterial lifestyle in a biofilm is completely different from bacteria in the planktonic mode of growth; bacterial gene expression changes radically once bacteria form a biofilm, compared to the planktonic state. However, for all these changes to take place, bacteria need to know that they are on a surface. A better understanding of bacterial surface sensing might suggest new ways to design “smart” surfaces that can’t be sensed by bacteria and prevent or inhibit biofilm formation.