Bastards and thrones in Medieval Europe

Today we use the term “bastard” as an insult, or to describe children born to non-marital unions. Being born to unmarried parents is largely free of the kind of stigma and legal incapacities once attached to it in Western cultures. Nevertheless, it still has associations of shame and sin. This disparagement of children born outside of Marriage is widely assumed to be a legacy of Medieval Christian Europe, with its emphasis on compliance with Catholic marriage law.

Yet in fact, prior to the thirteenth century, legitimate marriage or its absence was not the key factor in determining quality of birth. Instead, what mattered was the social status of the parents, that of the mother as well as that of the father. It was being born to the right parents, regardless of whether they were married according to the strictures of the Church, that made a child seem more or less worthy of inheriting parents’ lands, properties, and titles. Consider, for example, the case of William the Conqueror. Born to Robert, Duke of Normandy and a woman most clearly not his wife, Herleva, William was nevertheless recognized by his father as his heir. Despite his youth and questionable birth, William managed to conquer and rule first Normandy and then England, and to pass his kingdom and titles on to his children.

We find this William called “bastardus” or “bastart” in medieval sources, but we also find him called “nothus,” an Ancient Greek term used to indicate birth to anything other than two Athenian citizens. Other “bastards” might be called “spurius,” an Ancient Latin term for a child born to illicit sex, or to an unknown father. In medieval usage “spurius” was a term typically associated with serious kinds of illicit or illegal sex, such as the child of a nun or priest, or the child of adultery or incest. But medieval authors did not use the term spurius for William. The relationship of the bachelor Duke Robert and his concubine Herleva, if not a formal marriage, did not offend on these grounds. Nor, evidently, did anyone at the time question Herleva’s sexual honor, or, as a result, William’s paternity. 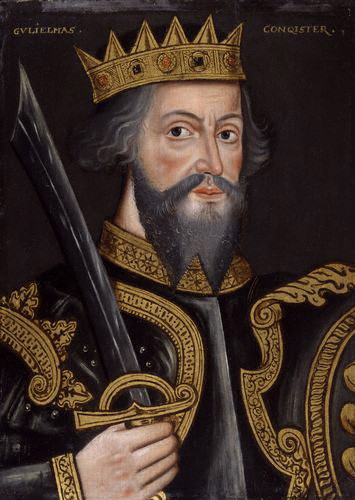 Portrait of William the Conqueror by an unknown artist, circa 1620. Courtesy of the National Portrait Gallery, London. Public Domain via Wikimedia Commons.

Why then, was William called “the Bastard”? Writing about William in the twelfth century, chronicler Orderic Vitalis called him “nothus.” What might Orderic have meant by this? The only elaboration he offered, in a famous passage, suggests a concern not with William’s mother’s marital status but rather with his maternal lineage. During William’s siege of Alençon in the 1050s, as Orderic wrote, the people gathered on the battlements taunted William not about the fact that his father had not married his mother, but about his mother Herleva’s paternity, as the daughter of either a tanner or an undertaker. In other words, they objected not to his birth out of wedlock, but to his mother’s low status. That sense of what made a birth illegitimate matches the definition of nothus often found in early medieval sources. As one late eleventh century chronicler declared, the French called William bastard because of his mixed parentage:  He bore both noble and ignoble blood, “obliquo sanguine.”

William’s success, despite his dubious birth, is not unique. Kings before and after him, and even queens, successfully inherited and reigned despite allegations of illegitimacy. We find many cases in which the children of illegal marriages, including even the children of monks and nuns, inherited noble and royal title throughout the twelfth century. Children born to a high status couple could inherit from those parents, even if their union violated contemporary prohibitions on marrying close kin, marrying those already married to other living spouses, or marrying those sworn to celibacy. Indeed we find little evidence that anyone challenged the rights of such children as heirs.

Why then have scholars believed that children born to something other than legitimate marriage were excluded? What scholars interpret as evidence of the exclusion of “bastards” in the modern sense is really evidence of parents’ freedom to bestow what lands and titles they possessed upon their offspring as they saw fit. Inheritance practices, while firmly rooted in an idea of family, operated with fluidity and flexibility as late as the twelfth century, and even, in some places, into the thirteenth century. Fathers could choose one child rather than another as heir, favoring on occasion younger sons and also daughters over their eldest sons.

To be sure, marrying legitimately certainly received a good deal of lip service throughout the Middle Ages. Nevertheless, in this pre-thirteenth-century world the most intense attention was paid not to the formation of legitimate marriages, but to the lineage and respectability of mothers. Only beginning in the second half of the twelfth century did birth outside of lawful marriage begin to render a child illegitimate, and as such potentially ineligible to inherit noble or royal title. In the thirteenth century both “bastard” and “spurius” came to signify a child born to anything other than a legitimate marriage, as defined by the canon law of the Catholic Church.

Understanding this helps us to better understand the history of illegitimacy, but also helps us arrive at a clearer picture of the workings and priorities of medieval western cultures before the thirteenth century. Status and lineage, not compliance with marriage law, determined a child’s prospects. Medieval society did not operate subject to rigid Christian canon law rules. Instead, it measured the value of its leaders based on their claims to celebrated ancestry, and the power attached to that kind of legitimacy.

Featured image credit: Bayeux Tapestry, Scene 44—Duke William and his two half-brothers: to his right, Bishop Odo of Bayeux and to his left, Count Robert of Mortain. Photo by Myrabella. Public Domain via Wikimedia Commons.

The post Bastards and thrones in Medieval Europe appeared first on OUPblog.

Bastards and thrones in Medieval Europe